Untitled. Spacial awareness: Ultimate guide to exploring space. About Koalas. About Koalas About Koalas 2014-01-27 - Comments: 0 Comments Send a Comment No Comments You may use these HTML tags and attributes: <a href="" title=""><abbr title=""><acronym title=""><b><blockquote cite=""><cite><code><del datetime=""><em><i><q cite=""><strike><strong> Notify me of follow-up comments by email. 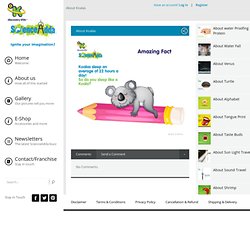 Notify me of new posts by email. About water Proofing Protein About Water Fall. . Lunar Reconnaissance Orbiter . NASA research for life in space_spinoff_06. 9 November Live feeds for Olympic torch in Space. Olympics Robert Z. Pearlman, CollectSpace.com Space.com 1 hour ago AP / OlympicTorch2014.com Former Soviet cosmonaut Valentina Tereshkova, 76, speaks during torch relay celebrations in the Yaroslavl region, about 350 kilometers (217 miles) northeast of Moscow. Cosmonaut Valentina Tereshkova, the first woman to launch into space on a rocket's flame, took hold of the Olympic flame on Saturday, completing a leg of the 2014 Winter Games' torch relay. At the same time, an unlit torch to be used in the Olympic Games' opening ceremonies was being readied for its own trip, first to its launch site and then into space. In June 1963, Tereshkova lifted off on the Soviet Vostok 6 mission to become the first woman to fly into space. "Today we have a very important day," Tereshkova said, according to a summary published by the Olympic Winter Games organizing committee.

"In space, we have to hide emotions far, far away because of the responsibility," Tereshkova remarked. 2012 March 14 - Angry Sun Erupting. Discover the cosmos! 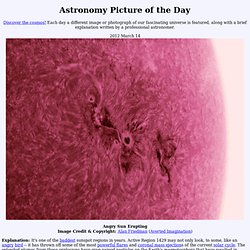 Each day a different image or photograph of our fascinating universe is featured, along with a brief explanation written by a professional astronomer. 2012 March 14 Explanation: It's one of the baddest sunspot regions in years. Active Region 1429 may not only look, to some, like an angry bird -- it has thrown off some of the most powerful flares and coronal mass ejections of the current solar cycle. 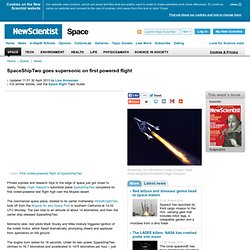 Today Virgin Galactic's suborbital plane SpaceShipTwo completed its first rocket-powered test flight high over the Mojave desert. The commercial space plane, docked to its carrier mothership WhiteKnightTwo, took off from the Mojave Air and Space Port in southern California at 14.02 UTC Monday. The pair rose to an altitude of about 14 kilometres, and then the carrier ship released SpaceShipTwo. 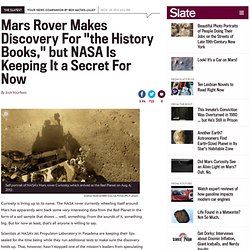 Curiosity is living up to its name. The NASA rover currently wheeling itself around Mars has apparently sent back some very interesting data from the Red Planet in the form of a soil sample that shows ... well, something. From the sounds of it, something big. But for now at least, that's all anyone is willing to say. Scientists at NASA's Jet Propulsion Laboratory in Pasadena are keeping their lips sealed for the time being while they run additional tests to make sure the discovery holds up. "This data is gonna be one for the history books," John Grotzinger, the rover mission's principal investigator, told NPR last week for a the buzz-inciting segment that aired today. Of course, the reason that NASA is keeping the potential find (mostly) under wraps is because it may turn out to be nothing but a false alarm, something that's happened before to the mission. 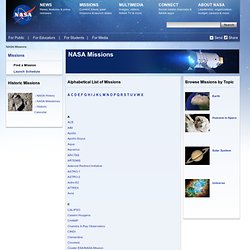 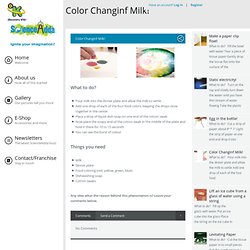 2014-01-22 - Comments: 0 What to do? Pour milk into the dinner plate and allow the milk to settleAdd one drop of each of the four food colors, keeping the drops close together in the centerPlace a drop of liquid dish soap on one end of the cotton swabNow place the soapy end of the cotton swab in the middle of the plate and hold it there for 10 to 15 secondsYou can see the burst of colour Things you need MilkDinner plateFood coloring (red, yellow, green, blue)Dishwashing soapCotton swabs. Big News From Mars? Rover Scientists Mum For Now. Hide captionNASA's Mars rover Curiosity dug up five scoops of sand from a patch nicknamed "Rocknest. 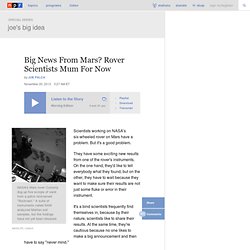 " A suite of instruments called SAM analyzed Martian soil samples, but the findings have not yet been released. NASA/JPL-Caltech Scientists working on NASA's six-wheeled rover on Mars have a problem. But it's a good problem. They have some exciting new results from one of the rover's instruments. It's a bind scientists frequently find themselves in, because by their nature, scientists like to share their results. The exciting results are coming from an instrument in the rover called SAM. SAM is a kind of miniature chemistry lab. Grotzinger says they recently put a soil sample in SAM, and the analysis shows something remarkable. We Choose the Moon: Celebrating the 40th Anniversary of the Apollo 11 Lunar Landing.