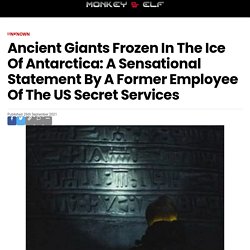 According to Corey Goode, most of these cameras are hidden in Antarctica and at the North Pole. The Watchers, Nephilim, Brain Hackers, Soul Hunters & High Technology, Demonologist Nathaniel Gillis. Is the Blood of the Giants Special. Proof That Giants Are Real. MARDUK: Anunnaki King of Earth* TO HELP AQUARIAN REFORMATION? 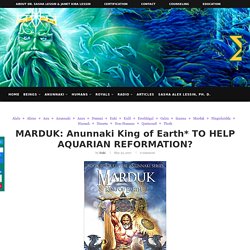 (Anthropology, UCLA) & Janet Kira Lessin, CEO, Aquarian Radio Marduk, Our secret Anunnaki ruler, says he’ll make amends for the suffering he caused. Anu, the legal successor to the planet Nibiru King Lahma, signed a treaty with King Alalu who slew Lahma. Anu quit as Lahma’s successor and agreed to let his and Alalu’s grandson Marduk succeed Alalu. Anu however reneged. Marduk didn’t rule Nibiru; he only, for a while, ruled the Astronaut Corps (Igigi) on Mars. He wed a Hybrid (Sarpanit) whose ancestors his dad created. Marduk backed the Igigi after they abducted hybrid women following his wedding. Hanging Gardens of Babylon-PERU !!! Hidden in plain sight. 1st Words Written about the Giants. Deluge Flood Epic Was Written Down by Ninhursag & Co. (9) Anu Created the Universe For Enki NOT for Enlil. 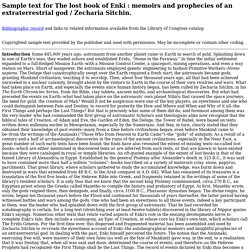 May be incomplete or contain other coding. Introduction Some 445,000 years ago, astronauts from another planet came to Earth in search of gold. Splashing down in one of Earth's seas, they waded ashore and established Eridu, “Home in the Faraway.” In time the initial settlement expanded to a full-fledged Mission Earth--with a Mission Control Center, a spaceport, mining operations, and even a way station on Mars.

What you need to know about the Nephilim and GIANTS living among us this is Madness. Giantology: Earth Jotnar. A Scary Truth Behind the Original Bible Story. What You Need To Know About The HADITHA DAM And The FALLEN. The Story of Marduk That Finally Shows Why He Was The Babylonian King of Gods. What You Need To Know About THE LOST BOOK OF ENKI And THE ANUNNAKI. NIBIRAN KING DENIED ENKI'S HYBRID SON ADAPA LONGEIVITY; ENKI'S SON KAIN KILLED ADAPA'S SON ABAEL–Anunnaki Tablets, Part 8. (Continued from ANUNNAKI Tablets, Tubes, Talks Part 7–Enki Begat Adapa & Titi) The Anunnaki shortened our lives to protect themselves us. 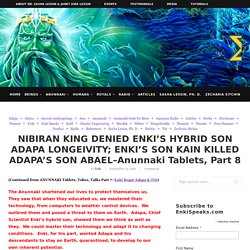 They saw that when they educated us, we mastered their technology, from computers to weather control devices. We outbred them and posed a threat to them on Earth. Adapa, Chief Scientist Enki’s hybrid son, showed them we think as well as they. We could master their technology and adapt it to changing conditions. ENKI, ET FROM THE PLANET NIBIRU, BEGAT ADAPA & TITI WHO BREED HYBRIDS RULERS by Sasha Alex Lessin, Ph.D. Excerpt from ANUNNAKI: FALSE GODS–Techno-Savvy ET s From the Planet Nibiru Who Came For Gold, Created Us From Their Genome to Work the Mines, Posed As Gods, Decided to Let Us Drown, But Then Decided to Breed Us to Work For Them by Sasha Alex Lessin, Ph.D.

& Janet Kira Lessin . Enki decided to uplevel Earthling intelligence and, at the same time, enjoy himself. [12th Planet: 5 – 6;] In his African reserve, “Enki in the marshlands looked about. MARDUK aka RA, WOULD-BE KING OF EARTH & NIBIRU. By Sasha Lessin, Ph.D. 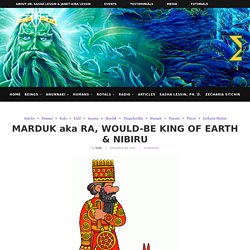 (Anthropology, U.C.L.A.) Extract from Marduk: Anunnaki King of the Earth Nergal (on right) convinced Marduk (on left) to leave Bablylon to get weapons hidden in Africa Listen to internet radio with Aquarian Radio on Blog Talk Radio. (2) Sumerians Tell a Very Different Version than the Historians - Their Words are Inexplicable. 8. The Sumerians - Fall of the First Cities. Breakaway Civilization, Who Built Gobekli Tepe 13,000 Years Ago? Retired CIA, Derrel Sims. What You Need To Know About THE LOST BOOK OF ENKI And THE ANUNNAKI. What You Need To Know About The GIANT Of KANDAHAR. Baffling Ancient Texts Speak of Titans in the Days of Noah. (3) What you need to know about the BOOK of ENOCH and the AGE of the FALLEN.

The Remains Of The Giants. Nephilim Watchers The Rulers of the Antediluvian World Are Coming Back. ETCSL:ETCSLcorpus. What you need to know about the Nephilim and GIANTS living among us this is Madness. Ancient Giants Proof? The Mysterious Plain Of Jars North Of Laos. The plain of jars in the plain of Xieng Khouang Laos is one of the sites the most enigmatic of the planet. 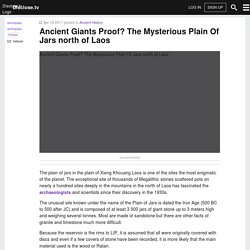 The exceptional site of thousands of Megalithic stones scattered pots on nearly a hundred sites deeply in the mountains in the north of Laos has fascinated the archaeologists and scientists since their discovery in the 1930s. The unusual site known under the name of the Plain of Jars is dated the Iron Age (500 BC to 500 after JC) and is composed of at least 3 000 jars of giant stone up to 3 meters high and weighing several tonnes.

Most are made of sandstone but there are other facts of granite and limestone much more difficult. Because the reservoir is the rims to LIP, it is assumed that all were originally covered with discs and even if a few covers of stone have been recorded, it is more likely that the main material used is the wood or Ratan. The pots seem to have been manufactured with a degree of knowledge of what materials and techniques have been adapted. What You Need To Know About UFOs And The FALLEN. Tom Scott vs Irving Finkel: The Royal Game of Ur. Demons of the Goetia and Aleister Crowley - Christopher Everard. New Anunnaki Documentary 2019 - They Look Human and They Are Still Her – Michael Lee Hill Designs - Ancient Anunnaki Technology.

They Found Something In Outer Space and It's On It's Way Here! 445,000 YEARS Sumerian Expert Renders Scholars Utterly Speechless with Decipherment. Giants Under Pressure Fe Fi Fo □ □□ THEY Will Never Tell You This.. Could It Be? (2019-2020) Reanimating Leviathan & the Giants, Manipulation of the Matrix - Ra Castaldo.

This suddenly happened on the United States! WATCH QUICKLY BEFORE IT IS DELETED! □Where 200 Angels Fell On the 33rd Parallel Unlocks These NEW Ancient Secrets! LIVE. Slice 51 - The Giants of Death Valley and the Paiute Tribes. End of the World - Nibiru DNA The Tribulation UFO's Anunaki and More - Dr. Scott McQuate Books. Smithsonian Drops Evidence of “Something Strange”—Something We Never Thought—Steve Quayle Bombshell. The Mysterious Tombs of Giants and Giant Warrior Statues of Sardinia. Are the Smithsonian Covering Up the Greatest Mysteries of Humanities Past. There is an underground City below the Pyramids of Giza. 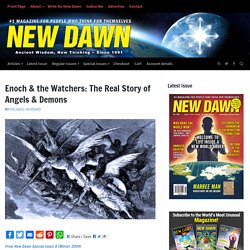 Saoc4. The Lost Book of Enki - Introduction. Clif High speaks on Human Origins and our Aquatic Creators. A Timeline From Chaos to Christ. Marduk = Nibiru Arrival Declared! with Gerald Clark. MARDUK: Anunnaki King of Earth. PERKS, PROBLEMS & PLEDGES FROM ETS WHO MADE US. Giant Anunnaki geneticists from the planet Nibiru gave us blessings, curses and challenges in our DNA and training. 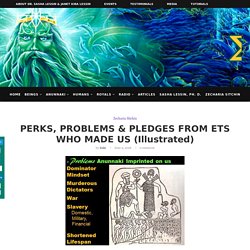 Perks the Anunnaki proffered began when they adapted their genome to Earth to create us, to give us our very existence. We benefitted from technology they taught as well as computers, rockets, submarines and the like–that we saw them use and eventually imitated. They blessed us with crops, livestock and entheogens. The Giants of Wisconsin - Locklip. Their heights ranged between 7.6ft and 10 feet and their skulls, “Presumably those of men, are much larger than the heads of any race which inhabit America to-day.” 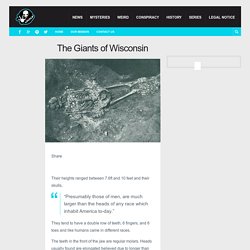 They tend to have a double row of teeth, 6 fingers, and 6 toes and like humans came in different races. The Time Before The Anunnaki - Locklip. Pre-Sumerians “The origin of the Sumerians is unknown. 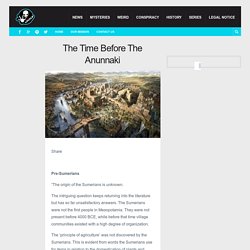 The intriguing question keeps returning into the literature but has so far unsatisfactory answers. The Sumerians were not the first people in Mesopotamia. They were not present before 4000 BCE, while before that time village communities existed with a high degree of organization. Alternative History of the World Documentary 2018 The Shining Ones. Magick of the Nephilim & Luciferian Philosophy - Michael W. Ford. What you need to know about the BOOK of GIANTS and the REVELATION of TRUTH. Sumerian cuneiform script and Sumerian language. Sumerian religion. Sumerian Religion. Sumerian Religion Sumerian religion has its roots in the worship of nature, such as the wind and water. The ancient sages of Sumer found it necessary to bring order to that which they did not understand and to this end they came to the natural conclusion that a greater force was at work.

ETCSL:ETCSLlanguage. Sumerian is a long-extinct language documented throughout the ancient Middle East, in particular in the south of modern Iraq. Moses tells us exactly how the Nephilim returned after the Flood. Can Anunnaki Access Your Consciousness thru DNA - Tablet Discovered. Who are the Fallen Angels? ~ CobraDove (Part 2) Mirrored. The Return of The Gods. By Wes Penre June 24, 2011 from WesPenre Website Spanish version 1. The Tribulation If we are to believe prophecy (and in this case Bible Prophecy in particular) we are currently living in the pre-Tribulation, in wait for the Battle of Armageddon and the Lord's Return.

The Anunnaki, New World Order, & The Hidden Battle For Humanity. ATLANTIS was Abandoned by The Watchers for 3 Reasons. Why The Sumerian Civilization is Way Too Controversial for Mainstream History. Ooparts & Ancient High Technology. This page duplicates Page 16 in the Main Index. Sure, this should have been on at least two pages but...Here we allegedly have; Giants, ancient civilizations, tunnels under Southern California, Smithsonian Suppression, general archeological supression etc. all from the same items. Here at s8int.com, we couldn't even figure out where to put this article. It's often difficult to do anything to substantiate these items. The Serpent of Life and Wisdom. By Estelle Nora Harwit Amrani November, 1998. Enki. Anunnaki Gods. Perhaps you never heard about some Sumerian gods with names like, Enlil, Nin-urta, or Enki. Man finds Nephilim giants in Utah. Anunnaki,Enki,Enlil,Yahweh,Jesus,Lucifer,Marduk,Bloodlines,Gerald,Clark,2017.

Where They Fell Unlocks NEW Ancient Secrets. Qasr Antar. Antarctica and Imprisoned Fallen Angels from the Book of Enoch. (Dr. Michael Salla) On March 14, Israeli News Live published a provocative story titled “The Fallen Angels Imprisoned in Antarctica and are still Alive.” Between the Devil and the Returning Rock. Nephilim Giants found in Utah, Brewers Cave the untold story. DOES A GIANT RACE. According to very numerous local reports, surviving giants live inside the rainforest jungle mountain ranges of Guadalcanal. Was a Nephilim Just Spotted in Arizona?! Crazy Footage Surfaces of GIANT 'Demon' Walking the Streets. Anunnaki Michael Lee Hill Glenn Bogue 090914. The Anunnaki. "God's heavenly council was made up of angelic servants often called “sons of God” (Job 1:6; Job 2:1). God sent these servants from the council from time to time to do His bidding (Job 1-2).