How digital culture is rewiring our brains. Digital divide - Wikipedia. A digital divide is an economic and social inequality with regard to access to, use of, or impact of information and communication technologies (ICT).[1] The divide within countries (such as the digital divide in the United States) may refer to inequalities between individuals, households, businesses, or geographic areas, usually at different socioeconomic levels or other demographic categories. 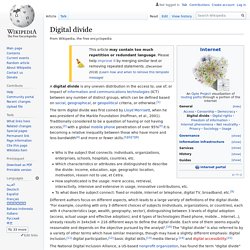 The divide between differing countries or regions of the world is referred to as the global digital divide,[1][2] examining this technological gap between developing and developed countries on an international scale.[3] Definitions and usage[edit] The term digital divide describes a gap in terms of access to and usage of information and communication technology. Different authors focus on different aspects, which leads to a large variety of definitions of the digital divide. Means of connectivity[edit] Infrastructure[edit] The bit as the unifying variable[edit] Skills and digital literacy[edit]

Senior Citizens Up Their Professional Skills, Thanks to This PC-Training Programme. This article on using computers for change is a part of the India Digital series powered by Intel India. 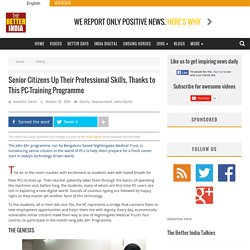 The Jobs 60+ programme, run by Bengaluru-based Nightingales Medical Trust, is introducing senior citizens to the world of PCs to help them prepare for a fresh career start in today’s technology driven world. Sex, honour, shame and blackmail in an online world. A BBC investigation has found that thousands of young women in conservative societies across North Africa, the Middle East, and South Asia are being shamed or blackmailed with private and sometimes sexually explicit images. 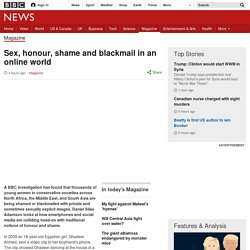 Daniel Silas Adamson looks at how smartphones and social media are colliding head-on with traditional notions of honour and shame. In 2009 an 18-year-old Egyptian girl, Ghadeer Ahmed, sent a video clip to her boyfriend's phone. The clip showed Ghadeer dancing at the house of a female friend. There was nothing pornographic about it, but she was wearing a revealing dress and dancing without any inhibition. Three years later, in an act of revenge after their relationship had ended, the boyfriend posted the video to YouTube. But in the years since she had sent the video, Ghadeer had also taken part in the Egyptian revolution, taken off her hijab, and started to speak out about the rights of women.

#ShameOnline But it goes beyond blackmail. Read Ghadeer's story in full. 5 connections that will change children’s lives. How Africa's first education tablet computer was created. Technology and Education. Cpsci. 27 Science Fictions That Became Science Facts in 2012. We may never have our flying cars, but the future is here. 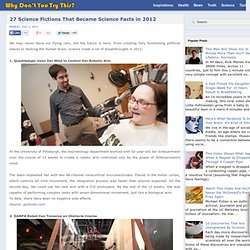 From creating fully functioning artificial leaves to hacking the human brain, science made a lot of breakthroughs in 2012. 1. Quadriplegic Uses Her Mind to Control Her Robotic Arm At the University of Pittsburgh, the neurobiology department worked with 52-year-old Jan Scheuermann over the course of 13 weeks to create a robotic arm controlled only by the power of Scheuermann’s mind. The team implanted her with two 96-channel intracortical microelectrodes. 2. Once the robot figures out how to do that without all the wires, humanity is doomed. 3. Photo Courtesy of Indigo Moon Yarns. At the University of Wyoming, scientists modified a group of silkworms to produce silk that is, weight for weight, stronger than steel.

Power of Nanotechnology Video Blow Your Mind. 2015 Documentary - Nano Revolution. The Artificial Intelligence Revolution: Part 1. PDF: We made a fancy PDF of this post for printing and offline viewing.

Buy it here. (Or see a preview.) Note: The reason this post took three weeks to finish is that as I dug into research on Artificial Intelligence, I could not believe what I was reading. It hit me pretty quickly that what’s happening in the world of AI is not just an important topic, but by far THE most important topic for our future. So I wanted to learn as much as I could about it, and once I did that, I wanted to make sure I wrote a post that really explained this whole situation and why it matters so much. We are on the edge of change comparable to the rise of human life on Earth. — Vernor Vinge What does it feel like to stand here?

It seems like a pretty intense place to be standing—but then you have to remember something about what it’s like to stand on a time graph: you can’t see what’s to your right. Which probably feels pretty normal… The Far Future—Coming Soon This works on smaller scales too. Future - Facebook is a growing and unstoppable digital graveyard. The day after my Aunt’s passing, I discovered she’d written me a lovely note on the front page of the Shakespeare collection she’d given me. 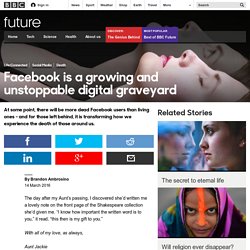 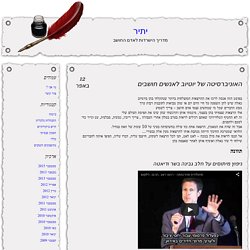 The AI Revolution: Road to Superintelligence. Online converter - convert video, images, audio and documents for free. The Most Awesome Robots (until 2014)