100 Blocks a Day. Most people sleep about seven or eight hours a night. 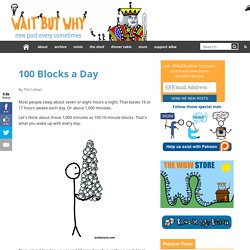 That leaves 16 or 17 hours awake each day. Or about 1,000 minutes. Let’s think about those 1,000 minutes as 100 10-minute blocks. That’s what you wake up with every day. Throughout the day, you spend 10 minutes of your life on each block, until you eventually run out of blocks and it’s time to go to sleep. It's Going to Be Okay - Follow Up. On Tuesday night, after tossing and turning for a couple hours, I said fuck it and grabbed the laptop and started typing. 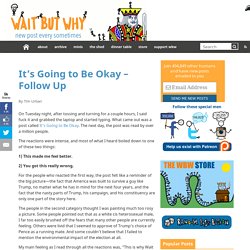 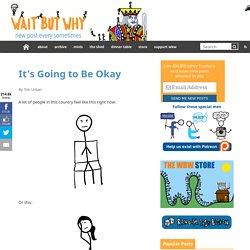 It’s a lot to take in. President Trump. Elon Musk: The World's Raddest Man. This is Part 1 of a four-part series on Elon Musk’s companies. 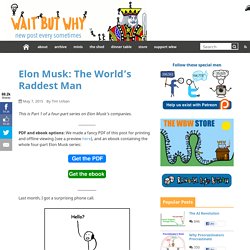 PDF and ebook options: We made a fancy PDF of this post for printing and offline viewing (see a preview here), and an ebook containing the whole four-part Elon Musk series: Last month, I got a surprising phone call. Elon Musk, for those unfamiliar, is the world’s raddest man. I’ll use this post to explore how he became a self-made billionaire and the real-life inspiration for Iron Man’s Tony Stark, but for the moment, I’ll let Richard Branson explain things briefly: Whatever skeptics have said can’t be done, Elon has gone out and made real. So no, that was not a phone call I had been expecting. A few days later, I found myself in pajama pants, pacing frantically around my apartment, on the phone with Elon Musk. For me, this project was one of the biggest no-brainers in history. . – “electric vs hybrid vs gas cars, deal with tesla, sustainable energy” – “spacex, musk, mars??

So it was on. Zeus would have been less stressful. Mm hm. How Tesla Will Change The World. This is Part 2 of a four-part series on Elon Musk’s companies. 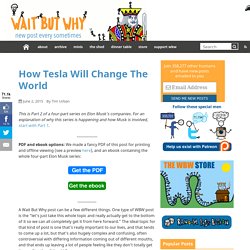 For an explanation of why this series is happening and how Musk is involved, start with Part 1. PDF and ebook options: We made a fancy PDF of this post for printing and offline viewing (see a preview here), and an ebook containing the whole four-part Elon Musk series: How (and Why) SpaceX Will Colonize Mars. This is Part 3 of a four-part series on Elon Musk’s companies. 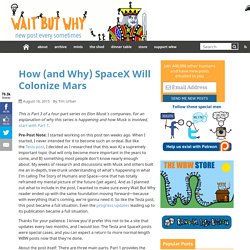 For an explanation of why this series is happening and how Musk is involved, start with Part 1. Pre-Post Note: I started working on this post ten weeks ago. When I started, I never intended for it to become such an ordeal. But like the Tesla post, I decided as I researched that this was A) a supremely important topic that will only become more important in the years to come, and B) something most people don’t know nearly enough about. My weeks of research and discussions with Musk and others built me an in-depth, tree-trunk understanding of what’s happening in what I’m calling The Story of Humans and Space—one that has totally reframed my mental picture of the future (yet again). Thanks for your patience. About the post itself: There are three main parts. How (and Why) SpaceX Will Colonize Mars - Page 2 of 5 - Wait But Why.

Part 2: Musk’s Mission Like the rest of us, Elon Musk has a handful of life goals. 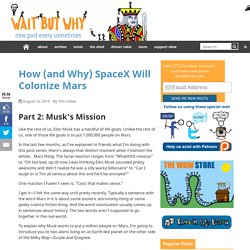 Unlike the rest of us, one of those life goals is to put 1,000,000 people on Mars. In the last few months, as I’ve explained to friends what I’m doing with this post series, there’s always that distinct moment when I mention the whole…Mars thing. The facial reaction ranges from “Whattttttt nooooo” to “Oh too bad, up till now I was thinking Elon Musk sounded pretty awesome and didn’t realize he was a silly wacky billionaire” to “Can I laugh or is Tim all serious about this and he’ll be annoyed?” One reaction I haven’t seen is, “Cool, that makes sense.” I get it—I felt the same way until pretty recently. How (and Why) SpaceX Will Colonize Mars - Page 3 of 5 - Wait But Why. Part 3: How to Colonize Mars There are some tough “going from A to B” situations in life. 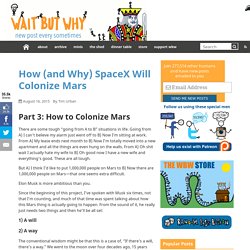 Going from A) I can’t believe my alarm just went off to B) Now I’m sitting at work. From A) My lease ends next month to B) Now I’m totally moved into a new apartment and all the things are even hung on the walls. How (and Why) SpaceX Will Colonize Mars - Page 4 of 5 - Wait But Why. Phase 2: Revolutionize the cost of space travel Main Characters: Falcon 9, Dragon, Falcon Heavy Goal: Get the price for a trip to Mars down to $500,000/seat Today, many people have heard of SpaceX. 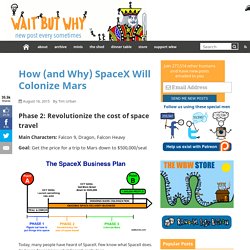 Few know what SpaceX does. And even fewer know what SpaceX really does. How (and Why) SpaceX Will Colonize Mars - Page 5 of 5 - Wait But Why. Phase 3: Colonize Mars Main Character: The Mars Colonial Transporter Goal: Put 1,000,000 people on Mars Today, no one is talking about Mars, and very few people think of Mars as a relevant part of the near future. 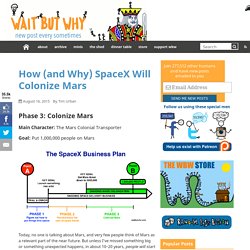 But unless I’ve missed something big or something unexpected happens, in about 10–20 years, people will start going to Mars. You could go to Mars in your lifetime. This is one of those topics that’s tough to absorb, because as you think about it, your mind will keep drifting back to, “Nahhhh.” But I’m pretty sure your brain’s in for some big surprises over the next few decades, for a bunch of reasons, and if you’re willing to accept that possibility, try to absorb the fact that a section titled “Phase 3: Colonize Mars” might actually—really—be based in reality. Everything from here on is based on the guesswork of Musk and others in the field. Before anything with people starts, there will be a preliminary phase where SpaceX sends spacecraft to Mars without any people. And repeat. The Cook and the Chef: Musk's Secret Sauce. This is the last part of a four-part series on Elon Musk’s companies. For an explanation of why this series is happening and how Musk is involved, start with Part 1. ← also click these Three quick notes: 1) PDF and ebook options: We made a fancy PDF of this post for printing and offline viewing (see a preview here), and an ebook containing the whole four-part Elon Musk series: 2) Here’s a G-rated version of the post, appropriate for all ages (with its own URL, so safe to share too). 3) Extra big thanks to our Patreon supporters for making WBW sustainable and for being immensely patient during the long wait.

Welcome to the last post in the series on the world of Elon Musk. The American Presidents—Washington to Lincoln. President’s Day is one of those weird American holidays where no one quite knows why it’s there or what it is, but it’s a day off so no one asks too many questions. The holiday kind of celebrates Washington’s birthday (February 22), kind of celebrates both Washington and Lincoln’s birthdays (Feb 22 and 12), and kind of celebrates all 43 presidents all at once. In any case, it seemed like the perfect time to research presidents for 60 hours and post a 7,000-word, 30-hour-late post diving into who each American president really was and what he really did. (My apologies to all non-American readers—you did nothing to deserve this.)

In deciding where to start, I looked at the whole line of presidents, and it turns out the story of the United States divides cleanly into three even parts, each 75 years long: Before we get started, eight general thoughts I had during my research: 1) 17/43 presidents, or 40% of them, were named John, James, George, or William. 2) There was a Mustache Era. The American Presidents—Johnson to McKinley. Note: This is Part 2.

Part 1 (Washington to Lincoln) is here. Last year, I published the post, The American Presidents—Washington to Lincoln. Washington to Lincoln. Two superstars, bookending legends like Adams, Jefferson, Madison, and Jackson; the birth of the constitution; the expansion from 13 East Coast colonies to a huge nation stretching from the Atlantic to the Pacific; two foreign wars; and a fierce debate over the issue of slavery—all leading up to the sizzling climax of the Civil War and the abolition of slavery. The AI Revolution: Road to Superintelligence. PDF: We made a fancy PDF of this post for printing and offline viewing.

Buy it here. (Or see a preview.) Note: The reason this post took three weeks to finish is that as I dug into research on Artificial Intelligence, I could not believe what I was reading. It hit me pretty quickly that what’s happening in the world of AI is not just an important topic, but by far THE most important topic for our future. So I wanted to learn as much as I could about it, and once I did that, I wanted to make sure I wrote a post that really explained this whole situation and why it matters so much. We are on the edge of change comparable to the rise of human life on Earth. — Vernor Vinge.

The AI Revolution: Our Immortality or Extinction. Note: This is Part 2 of a two-part series on AI. Part 1 is here. PDF: We made a fancy PDF of this post for printing and offline viewing. Buy it here. (Or see a preview.) We have what may be an extremely difficult problem with an unknown time to solve it, on which quite possibly the entire future of humanity depends. — Nick Bostrom. From Muhammad to ISIS: Iraq's Full Story. If you’re not sure what Odd Things in Odd Places is and why I’m in Iraq by myself, here’s why. On the morning of Saturday, August 2nd, I got in a taxi in Erbil, the regional capital of Kurdish Iraq, and asked the driver to take me to the Khazir refugee camp.