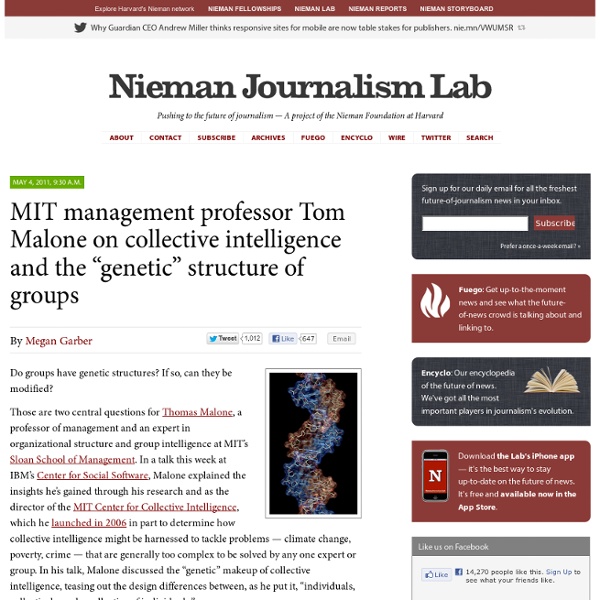 Do groups have genetic structures? If so, can they be modified? Those are two central questions for Thomas Malone, a professor of management and an expert in organizational structure and group intelligence at MIT’s Sloan School of Management. In a talk this week at IBM’s Center for Social Software, Malone explained the insights he’s gained through his research and as the director of the MIT Center for Collective Intelligence, which he launched in 2006 in part to determine how collective intelligence might be harnessed to tackle problems — climate change, poverty, crime — that are generally too complex to be solved by any one expert or group. In his talk, Malone discussed the “genetic” makeup of collective intelligence, teasing out the design differences between, as he put it, “individuals, collectively, and a collective of individuals.” The smart group And what they found is telling. So how do you engineer groups that can problem-solve effectively? Which, yay. The group genome

Hacks at the Massachusetts Institute of Technology A hack in progress in Lobby 7. Although the practice is unsanctioned by the university, and students have sometimes been arraigned on trespassing charges for hacking,[18][19][20] hacks have substantial significance to MIT's history and student culture. Student bloggers working for the MIT Admissions Office have often written about MIT hacks, including those occurring during Campus Preview Weekend (CPW), an event welcoming admitted prospective freshman students.[21] Alumni bloggers on the MIT Alumni Association website also report and document some of the more memorable hacks.[22] Since the mid-1970s, the student-written guide How To Get Around MIT (HowToGAMIT) has included a chapter on hacking, and discusses history, hacker groups, ethics, safety tips, and risks of the activity.[23] Cultural aspects[edit] Residents of MIT's Simmons Hall collaborated to make a smiley face on the building's facade, December 8, 2002. Famous hacks[edit]

New Data: Tweet Lots of Links to Get Followers For more mythbusting and social media science, don’t forget to register for my Science of Social Media webinar. My effort to analytically study the unicorns-and-rainbows myth of “engaging in the conversation” started by looking at the relationship between the number of followers a user has and the percentage of their Tweets that are “@” replies. I found that highly followed users are less conversational than those with few followers. This time, I looked at the relationship between follower count and the percentage of a user’s tweets that contain links and are not replies. Using a sample of random, recently active Twitter accounts, I found a strong correlation. As the amount of links a user tweets increases the number of followers they have also increases. The data is starting to mount to suggest that “engaging in the conversation” is a waste of time from a marketing and reach-building perspective, especially when compared to sharing content.

MIT World | Distributed Intelligence Google gets its Peanut Butter manifesto: We don't get platforms A Google engineer wrote a brilliant memo that wound up being shared to the masses on Google+. The gist: Google doesn't know a thing about platforms and that fact threatens its existence given that Apple, Amazon, Microsoft and Facebook understand them. The engineer, Steve Yegge, hopefully won't be fired for posting a rant six years in the making on Google+. Google+: An "example of our complete failure to understand platforms." Yegge (right) has so many money quotes in his memo, which was shared to the world because "I am not what you might call an experienced Google+ user." The biggest thing in Yegge's memo is that he argues that Google doesn't get platforms. Google+ is a prime example of our complete failure to understand platforms from the very highest levels of executive leadership (hi Larry, Sergey, Eric, Vic, howdy howdy) down to the very lowest leaf workers (hey yo). Yegge then goes on to compare Google's platform strategy with Amazon, Apple, Microsoft and Facebook.

Saxelab Social Cognitive Neuroscience Laboratory at MIT Brian Vellmure: And Then There Was One And then there was one. From a competitive standpoint, this phrase conjures up images of one champion left among the many fallen. One champion bold enough, strong enough, and resilient enough to outlast everyone else. The immortal words of Hall of Fame Green Bay Packers coach Vince Lombardi come to mind: “I firmly believe that any man’s finest hour — his greatest fulfillment to all he holds dear — is that moment when he has worked his heart out in a good cause and lies exhausted on the field of battle – victorious.” However, in a networked age, is this mindset still relevant, or does the phrase “And then there was one” take on a completely different connotation? Humans across the globe continue to assemble into one giant interconnected network, a network of one. It’s imperative to recognize that this didn’t just happen with the creation and growth of Facebook, or Myspace, Friendster, or Geocities before that. In addition, this rapidly assembling network isn’t just humans.

SIMILE Project ConceptNet | Common Sense Computing Initiative ConceptNet aims to give computers access to common-sense knowledge , the kind of information that ordinary people know but usually leave unstated. The data in ConceptNet is being collected from ordinary people who contributed it on sites like Open Mind Common Sense . ConceptNet represents this data in the form of a semantic network, and makes it available to be used in natural language processing and intelligent user interfaces. ConceptNet is an open source project, with a Python implementation and a REST API that anyone can use to add computational common sense to their own project. Some of the nodes and links in ConceptNet. Places to go next ConceptNet Development Team Current developers Project alumni Papers Papers about ConceptNet itself Havasi, C., Speer, R. & Alonso, J. (2007) ConceptNet 3: a Flexible, Multilingual Semantic Network for Common Sense Knowledge. Liu, H. & Singh, P. (2004) ConceptNet: A Practical Commonsense Reasoning Toolkit. Liu, H. & Singh, P. (2004).