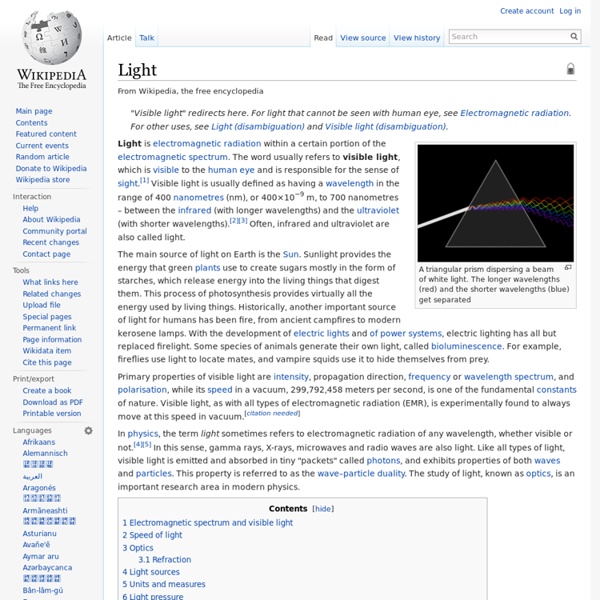 A triangular prism dispersing a beam of white light. The longer wavelengths (red) and the shorter wavelengths (blue) get separated Light is electromagnetic radiation within a certain portion of the electromagnetic spectrum. The word usually refers to visible light, which is visible to the human eye and is responsible for the sense of sight.[1] Visible light is usually defined as having a wavelength in the range of 400 nanometres (nm), or 400×10−9 m, to 700 nanometres – between the infrared (with longer wavelengths) and the ultraviolet (with shorter wavelengths).[2][3] Often, infrared and ultraviolet are also called light. The main source of light on Earth is the Sun. In physics, the term light sometimes refers to electromagnetic radiation of any wavelength, whether visible or not.[4][5] In this sense, gamma rays, X-rays, microwaves and radio waves are also light. Electromagnetic spectrum and visible light The behaviour of EMR depends on its wavelength. Speed of light Optics Refraction where

Color Color (American English) or colour (British English; see spelling differences) is the visual perceptual property corresponding in humans to the categories called red, blue, yellow, and others. Color derives from the spectrum of light (distribution of light power versus wavelength) interacting in the eye with the spectral sensitivities of the light receptors. Color categories and physical specifications of color are also associated with objects or materials based on their physical properties such as light absorption, reflection, or emission spectra. By defining a color space, colors can be identified numerically by their coordinates. Because perception of color stems from the varying spectral sensitivity of different types of cone cells in the retina to different parts of the spectrum, colors may be defined and quantified by the degree to which they stimulate these cells. The science of color is sometimes called chromatics, colorimetry, or simply color science. Physics of color Perception

Geometrical optics The simplifying assumptions of geometrical optics include that light rays: propagate in rectilinear paths as they travel in a homogeneous mediumbend, and in particular circumstances may split in two, at the interface between two dissimilar mediafollow curved paths in a medium in which the refractive index changesmay be absorbed or reflected. Explanation[edit] A slightly more rigorous definition of a light ray follows from Fermat's principle, which states that the path taken between two points by a ray of light is the path that can be traversed in the least time.[1] Reflection[edit] Glossy surfaces such as mirrors reflect light in a simple, predictable way. With such surfaces, the direction of the reflected ray is determined by the angle the incident ray makes with the surface normal, a line perpendicular to the surface at the point where the ray hits. Refraction[edit] Illustration of Snell's Law and another medium with index of refraction . where and ) and object distance ( varies slowly. . with

Wave–particle duality Origin of theory[edit] The idea of duality originated in a debate over the nature of light and matter that dates back to the 17th century, when Christiaan Huygens and Isaac Newton proposed competing theories of light: light was thought either to consist of waves (Huygens) or of particles (Newton). Through the work of Max Planck, Albert Einstein, Louis de Broglie, Arthur Compton, Niels Bohr, and many others, current scientific theory holds that all particles also have a wave nature (and vice versa).[2] This phenomenon has been verified not only for elementary particles, but also for compound particles like atoms and even molecules. For macroscopic particles, because of their extremely short wavelengths, wave properties usually cannot be detected.[3] Brief history of wave and particle viewpoints[edit] Thomas Young's sketch of two-slit diffraction of waves, 1803 Particle impacts make visible the interference pattern of waves. A quantum particle is represented by a wave packet.

Visual appearance Appearance of reflective objects[edit] The appearance of reflecting objects is determined by the way the surface reflects incident light. The reflective properties of the surface can be characterized by a closer look at the (micro)-topography of that surface. Definition diffusion, scattering: process by which the spatial distribution of a beam of radiation is changed in many directions when it is deviated by a surface or by a medium, without change of frequency of its monochromatic components.[1] Basic types of light reflection[edit] Appearance of transmissive objects[edit] Terminology[edit] Reflective objects [2] Transmissive objects [4] See also[edit] References[edit] Jump up ^ CIE No17.4-1987: International lighting vocabulary, 4th ed. F. External links[edit] Instrumentation for measurement and evaluation of appearance characteristics is available from:

Photon Nomenclature[edit] In 1900, Max Planck was working on black-body radiation and suggested that the energy in electromagnetic waves could only be released in "packets" of energy. In his 1901 article [4] in Annalen der Physik he called these packets "energy elements". The word quanta (singular quantum) was used even before 1900 to mean particles or amounts of different quantities, including electricity. Later, in 1905, Albert Einstein went further by suggesting that electromagnetic waves could only exist in these discrete wave-packets.[5] He called such a wave-packet the light quantum (German: das Lichtquant). The name photon derives from the Greek word for light, φῶς (transliterated phôs). Physical properties[edit] The cone shows possible values of wave 4-vector of a photon. A photon is massless,[Note 2] has no electric charge,[13] and is stable. Photons are emitted in many natural processes. Since p points in the direction of the photon's propagation, the magnitude of the momentum is