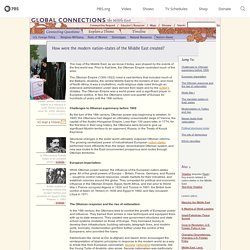 Members of both of these groups are fighting for greater autonomy within -- or independence from -- their countries, but face stiff resistance. Armenians in Anatolia had similar ambitions in the early 20th century, but their nationalism was seen as a threat by the state, and huge numbers of Armenians were displaced or killed. Lebanon was created by the French as a mandate separate from Syria in order to preserve the political autonomy of its Christian population. The system of government was developed to share power among the several religious groups in the Lebanese population: Maronite Christian, Sunni Muslim, Druze, and Shii Muslim. Israel is a special case. 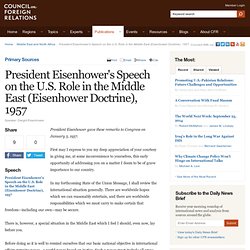 First may I express to you my deep appreciation of your courtesy in giving me, at some inconvenience to yourselves, this early opportunity of addressing you on a matter I deem to be of grave importance to our country. In my forthcoming State of the Union Message, I shall review the international situation generally. There are worldwide hopes which we can reasonably entertain, and there are worldwide responsibilities which we must carry to make certain that freedom—including our own—may be secure. There is, however, a special situation in the Middle East which I feel I should, even now, lay before you. Before doing so it is well to remind ourselves that our basic national objective in international affairs remains peace—a world peace based on justice.

Everything in Syria Is Going to Plan - By Aaron David Miller. If you don't know where you're going, the old saying goes, any road will get you there. 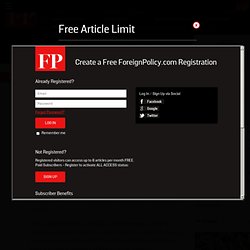 The conventional wisdom on Syria has it that the external actors to the tragic drama playing out these many months don't know what to do, have no end game, and are thus incapable of acting alone or in concert to end the killing and create an effective transition to the post-Assad era. But that's wrong. The key actors -- America, Russia, Turkey, Iran, and the Arabs -- know precisely what they're about (or at least what they want to avoid) and are acting quite willfully to attend to their own interests. In Syria's Sectarian Battle, Who Are The Alawites? Renee Montagne talks with Professor Joshua Landis about the Alawite sect in Syria. 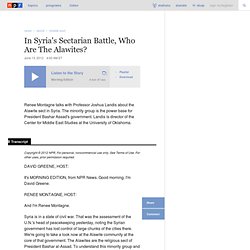 The minority group is the power base for President Bashar Assad's government. Landis is director of the Center for Middle East Studies at the University of Oklahoma. Copyright © 2012 NPR. For personal, noncommercial use only. See Terms of Use. It's MORNING EDITION, from NPR News. And I'm Renee Montagne. Syria is in a state of civil war. Academic Module: Crisis Guide: The Israeli-Palestinian Conflict. The Arab Uprisings: How Did We Get Here? Arab spring: an interactive timeline of Middle East protests. The israeli conflict2. Parallel Realities - Resolution 242 And The Aftermath Of 1967.

The argument over which side to blame for the Six Day War goes on, but all of the parties acknowledge that Israel's dramatic victory altered the face of the Middle East and established the boundaries--literally and figuratively--within which the quest for an Arab-Israeli settlement has been conducted ever since. 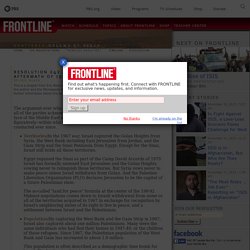 Territories/In the 1967 war, Israel captured the Golan Heights from Syria, the West Bank including East Jerusalem from Jordan, and the Gaza Strip and the Sinai Peninsula from Egypt. Except for the Sinai, Israel still holds all those territories. Egypt regained the Sinai as part of the Camp David Accords of 1979. Israel has formally annexed East Jerusalem and the Golan Heights, vowing never to relinquish those territories. But Syria vows never to make peace unless Israel withdraws from Golan. Population/By capturing the West Bank and the Gaza Strip in 1967, Israel also captured about one million Palestinians. » Resolution 242. Parallel Realities - Dialogue Of Two Monologues. I.F. 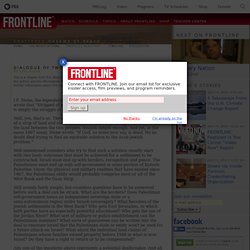 Parallel Realities - An Oath And A Chant. "Masada shall not fall again. 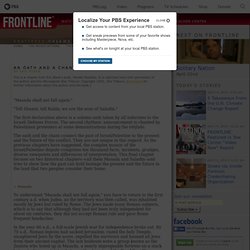 " "Tell Shamir, tell Rabin; we are the sons of Saladin. " Shattered Dreams Of Peace. Imperial History of the Middle East. A/RES/3236 (XXIX) of 22 November 1974. Middle East conflict: History in maps. To see how borders in the region have changed over the years click through the maps below: Palestine was among several former Ottoman territories placed under British control by the League of Nations. 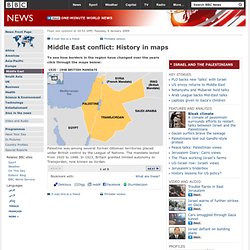 The mandate lasted from 1920 to 1948. In 1923, Britain granted limited autonomy to Transjordan, now known as Jordan. The United Nations General Assembly proposed dividing Palestine into Jewish and Arab states, with Jerusalem as an international city. BBC NEWS. THE QUESTION OF PALESTINE AT THE UNITED NATIONS. Issue Guide: One Year of 'Arab Spring' Upheavals.