The violence that began at Jerusalem’s ancient holy sites is driven by a distinctly modern zeal. On Monday, an apocalyptic video from Jerusalem began to circulate on social media. 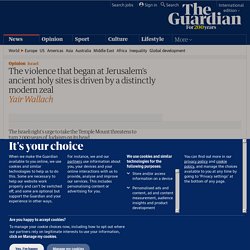 In the background, it showed a large fire raging on the site Muslims call al-Aqsa or al-Haram al-Sharif, and Jews call the Temple Mount. A tree was ablaze next to al-Aqsa mosque (some blamed Israeli police stun grenades, others blamed Palestinians shooting fireworks, perhaps aiming at Jewish worshippers). Below, the large plaza of the Western Wall was full with young Jewish Israelis, identified with the religious Zionist right, celebrating “Jerusalem Day” (marking the occupation of East Jerusalem in 1967). 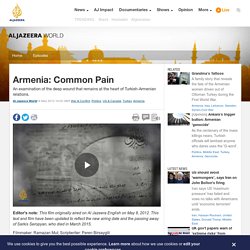 This text and film have been updated to reflect the new airing date and the passing away of Sarkis Seropyan, who died in March 2015. Filmmaker: Ramazan Mut; Scriptwriter: Peren Birsaygili Every year on April 24, Armenians around the world commemorate the anniversary of what they claim to be genocide. But 100 years after the events of 1915, the use of the word "genocide" to describe what happened to the Armenians at the hands of the Turks remains a contentious political issue. Turkey vehemently rejects genocide claims. The true number of Armenians that were killed or died in 1915 and 1916 remains a topic of heated debate. 'A history of co-existence' For many, this issue has come to overshadow what Stepan Grigoryan from the Analytical Centre on Globalisation and Regional Cooperation describes as "a history of co-existence between Turks and Armenians".

A splintering empire "It was a time of war. Source: Al Jazeera.

Egypt. The shocking story of Israel's disappeared babies. Tel Aviv - For nearly 40 years, everything about Gil Grunbaum's life was a lie, including his name. 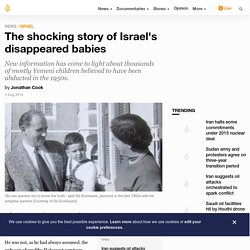 He was not, as he had always assumed, the only son of wealthy Holocaust survivors who owned a baby garments factory near Tel Aviv. Grunbaum had been stolen from his mother by doctors at a hospital in northern Israel in 1956, moments after she gave birth. His biological parents - recent immigrants to Israel from Tunisia - were told their child had died during delivery. They were sent home without a death certificate and denied the chance to see their baby's body or a grave. Despite his darker looks, it never occurred to Grunbaum that the parents who raised him were not biologically related to him. And so had government officials. AL JAZEERA WORLD: Israel's Great Divide "Even when I discovered by chance that I was adopted, the welfare services did everything they could to try to stop me finding my biological family," Grunbaum told Al Jazeera.

"She hugged me and we cried. The Arab Spring of 1919. 1919 was a year of travelling revolutions across the Middle East and North Africa. 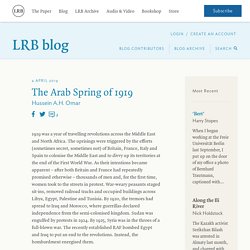 The uprisings were triggered by the efforts (sometimes secret, sometimes not) of Britain, France, Italy and Spain to colonise the Middle East and to divvy up its territories at the end of the First World War. As their intentions became apparent – after both Britain and France had repeatedly promised otherwise – thousands of men and, for the first time, women took to the streets in protest.

War-weary peasants staged sit-ins, removed railroad tracks and occupied buildings across Libya, Egypt, Palestine and Tunisia. By 1920, the tremors had spread to Iraq and Morocco, where guerrillas declared independence from the semi-colonised kingdom. Sudan was engulfed by protests in 1924. In November 1918, Tripolitanian peasants established a free republic independent of Italian Libya.

Egyptian revolutionaries recognised that Wilson didn’t intend his doctrine of self-determination to apply to everyone. W.E.B. An Archive of Atrocities. NPR Choice page. 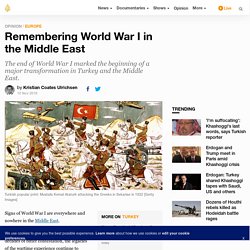 Overlain by subsequent conflicts and decades of bitter contestation, the legacies of the wartime experience continue to reverberate long after the conflict passed into history in Europe. With the Middle East in the throes of renewed political turmoil and having experienced decades of regional and international crises, many deriving from the decisions taken after the World War I, the complicated legacies of the war may not immediately be apparent but are nonetheless highly relevant. A parallel may be drawn with the divided Europe up until 1989, where the ramifications of the World War II remained highly visible across multiple generations and made it difficult to establish historical distance from events whose legacy continued to resonate decades after. 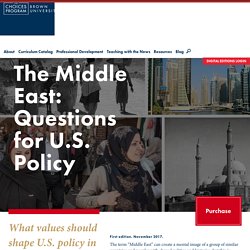 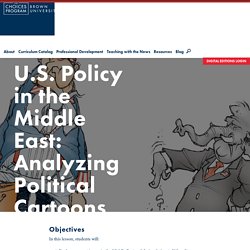 The MESA Debate: The Scholars, the Media, and the Middle East.