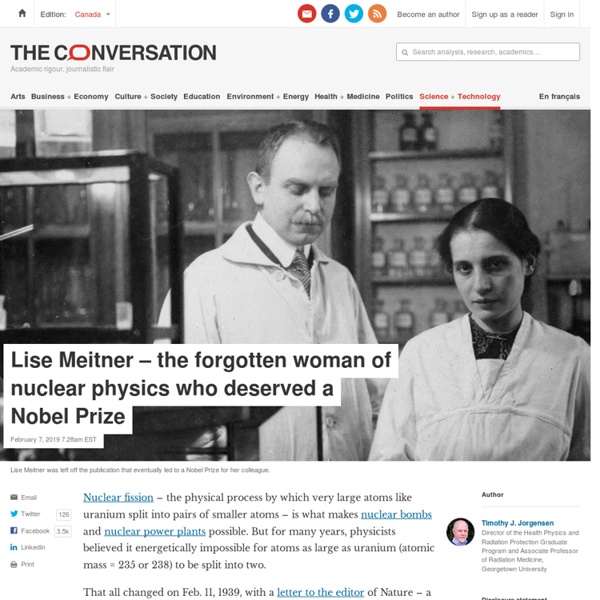 Nuclear fission – the physical process by which very large atoms like uranium split into pairs of smaller atoms – is what makes nuclear bombs and nuclear power plants possible. But for many years, physicists believed it energetically impossible for atoms as large as uranium (atomic mass = 235 or 238) to be split into two. That all changed on Feb. 11, 1939, with a letter to the editor of Nature – a premier international scientific journal – that described exactly how such a thing could occur and even named it fission. In that letter, physicist Lise Meitner, with the assistance of her young nephew Otto Frisch, provided a physical explanation of how nuclear fission could happen. It was a massive leap forward in nuclear physics, but today Lise Meitner remains obscure and largely forgotten. She was excluded from the victory celebration because she was a Jewish woman. What happens when you split an atom Meitner went further to explain how her scientific colleagues had gotten it wrong.

Climate change has contributed to droughts since 1900, and is likely to get worse, says tree-ring study Using studies of tree rings going back centuries, scientists have unearthed clear evidence that the rise of human-generated greenhouse gases was having an effect on global drought conditions as early as 1900. A new, first-of-its-kind study by scientists at Columbia University’s Earth Institute, published Wednesday in the journal Nature, largely confirms what climate models have shown. In the absence of strong historic data on precipitation, those computer models forecast not only future scenarios, but shed light on historical trends. The dovetailing of the tree-ring studies, which correlate to soil moisture, with climate models gives scientists the assurance that the computer models are, in fact, correct, they say. Marvel said that the results, while not unexpected, are nonetheless gratifying. “As a scientist, you are always surprised whenever anything you do works,” she said in a phone interview.

Immigration, legislation, investigation and child poverty: 4 scholars respond to Trump's State of the Union Editor’s note: In his second State of the Union address, President Donald Trump ranged from generous to combative, eloquent to blunt. He unexpectedly complimented the wave of recently elected Democratic women in the House, and they responded by applauding for themselves. And he spent a lot of time on a his favorite topic: immigration and the border wall. We asked four scholars to choose what they saw as key quotes and add context to the president’s speech. Refugees now and refugees in history

Donald Trump fans cry betrayal as he rebukes Capitol violence Donald Trump’s belated “concession” to a peaceful and orderly transition of power after the storming of the US Capitol has provoked anger and conspiracy theories among some of his most ardent followers. On social media channels and chatrooms like Parler and 4chan, where far-right Trumpists have gravitated as other social media sites have increasingly shut out the president, there were complaints of betrayal. Trump claimed on Thursday that he was “outraged by the violence, lawlessness and mayhem” of the Capitol siege that he had incited, and said those who “broke the law will pay” – comments that perhaps reflected concern over mounting legal and political hazard rather than a newfound sense of contrition and integrity. Nevertheless they prompted an outpouring of anger, grief and denial from his hardline acolytes. “A punch in the gut,” said one.

The Artificial Intelligence Revolution: Part 1 PDF: We made a fancy PDF of this post for printing and offline viewing. Buy it here. (Or see a preview.) Circumcision: Social, Sexual, Psychological Realities We continue examining myths about circumcision, including traditions, social and sexual relations. NOTE: Primary author is Lillian Dell'Aquila Cannon (see her blog), with assistance from Dan Bollinger Part 3 article continues after advertisement Myth: You have to circumcise the baby so that he will match his dad. Reality check: The major difference that boys notice is that dad's penis has hair, and is larger. A democracy or a kleptocracy? How South Africa stacks up South Africans have been held spellbound by the torrent of evidence of corruption emerging from two parallel commissions of inquiry – into state capture, and the fitness to hold office of two senior officials of the National Prosecuting Authority. These strengthen perceptions that South Africa under former President Jacob Zuma – from May 2009 to March 2018 – transformed from a democracy into a “kleptocracy”: a country ruled by thieves. The country scored only 43 out of 100 on Transparency International’s Corruption Perceptions Index for 2018 Corruption Perceptions Index for 2018, down from 47 in 2009. So the question is: is it indeed the case that South Africa has become a kleptocracy? Has it travelled far along the road to joining states such as Russia and Equatorial Guinea, notorious for being ruled by authoritarian leaders in league with corrupt oligarchs at the expense of ordinary people? If this is so, is that condition reversible?

How to Fix the Supreme Court, Part One: C is for Clarence - PREVAIL by Greg Olear “If everyone made war only according to his own convictions, there would be no war,” Prince Andrei Bolkonsky thought… A good player who loses at chess is genuinely convinced that he has lost because of a mistake, and he looks for this mistake in the beginning of the game, but forgets that there were also mistakes at every step in the course of the game, that none of his moves was perfect. The mistake he pays attention to is conspicuous only because his opponent took advantage of it. —War and Peace (Leo Tolstoy, 1867) Three Generations of Imbeciles are Enough. —Buck v.

Course Mapping - Center for Teaching and Learning Maps are all around us: on our phones, in our cars, in public spaces—just about anywhere. We use them to navigate traffic, go on road trips, illustrate concepts; put simply, they show us the way from Point A to Point B. By illustrating roads, traffic, and terrain, maps display how to get somewhere and what might happen along the way. Essentially, maps provide a high-level overview of new or unfamiliar territory, allowing us to journey safely and efficiently. Designing an online course can also present unfamiliar territory. If you’re creating one, you probably know where you want students to end up, but you might not know how you’ll get them there, what tools are available to you, or even how you’ll engage them.

Plastic leachates impair growth and oxygen production in Prochlorococcus , the ocean’s most abundant photosynthetic bacteria Plastic leachates negatively affect Prochlorococcus growth Leachates of common plastic items (HDPE shopping bags and PVC matting) were made using a base of sterile artificial seawater. Exponential phase cultures of Prochlorococcus were inoculated into media containing a range of leachate dilutions (generated by volume/volume dilutions in AMP1 media of 50, 25, 12.5, 6.25 and 3.125% for HDPE; 10, 2, 1, 0.5 and 0.25% for PVC) alongside equivalent controls (AMP1 media with no leachate addition). The leachate dilutions used for growth and photophysiology monitoring were chosen following preliminary tests that indicated PVC leachate had a considerably greater effect than HDPE at equivalent concentrations.

Fact-checking Hawley’s claim about Pennsylvania’s election law Sen. Josh Hawley of Missouri led the Senate charge against the electoral college certification of Joe Biden’s victory. Much of his argument was based on changes to mail-in voting in Pennsylvania. Hawley said that he objected to Biden’s win because Pennsylvania failed to follow its own state election laws. "You have a state constitution that has been interpreted for over a century to say that there is no mail-in balloting permitted, except for in very narrow circumstances that's also provided for in the law," Hawley said Jan. 6. "And, yet, last year, Pennsylvania elected officials passed a whole new law that allows universal mail-in balloting, and did it irregardless of what the Pennsylvania Constitution said."