The Heroes of America's Startup Economy Weren't Born in America 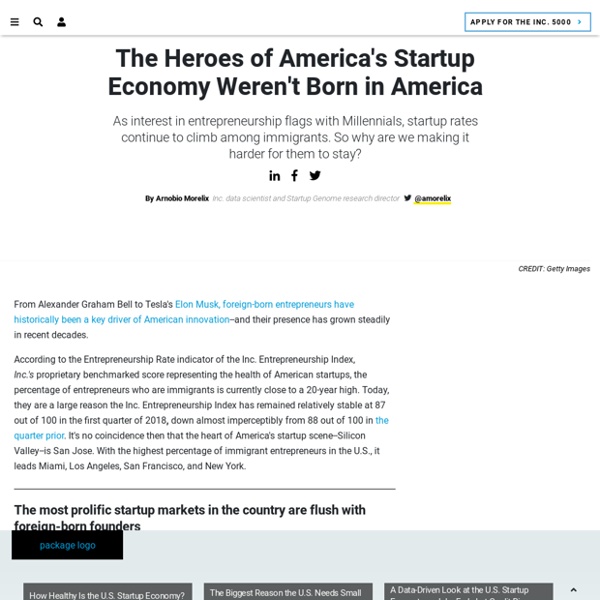 According to the Entrepreneurship Rate indicator of the Inc. Entrepreneurship Index, Inc.'s proprietary benchmarked score representing the health of American startups, the percentage of entrepreneurs who are immigrants is currently close to a 20-year high. Today, they are a large reason the Inc. Entrepreneurship Index has remained relatively stable at 87 out of 100 in the first quarter of 2018, down almost imperceptibly from 88 out of 100 in the quarter prior. It's no coincidence then that the heart of America's startup scene--Silicon Valley--is San Jose. The most prolific startup markets in the country are flush with foreign-born founders Percentage of immigrant entrepreneurs among U.S. metro areas While the overall 20- to 35-year-old U.S. population lacks the desire their parents had to start a business for themselves, immigrant entrepreneurs of all ages are taking advantage of healthy access to capital and forging on through remarkably tight labor conditions. Canada's Gain The Inc.

New Mexico does not give EBT cards to immigrants in U.S. illegally as they wait to see a judge A man driving efforts to privately fund and build a wall at the southern border claims that New Mexico is giving public benefits to immigrants in the country illegally. Brian Kolfage, president and founder of Build the Wall, Inc., called out New Mexico in a series of tweets this month. "Did u know the state of New Mexico gives all illegals emergency welfare, no process like Americans go through. Handed an EBT Loaded with $1000, + $200 per child paid every month until their court date 5-6 years later. The Governor @GovMLG has a crisis and it’s costing Americans," Kolfage tweeted June 9. "🚨 ALERT 🚨 New Mexico and maybe other states illegals are issued emergency welfare EBT cards with $1k a month +$200 for each child, for at least 5+ years until they see a judge.

Islamophobia is not confined to online groups. It leaks across public life On Friday morning, as the news from Christchurch was still rolling across radio bulletins, Sir Mark Rowley, the former head of counter-terrorism at the Met, was commenting on the horror on BBC Radio 4’s Today programme. Fifty Muslims had been brutally murdered, and 48 seriously injured. For 17 horrifying minutes, a white supremacist terrorist unloaded round after round of bullets into men, women and children. Islamophobia was undoubtedly real and on the rise and being propagated online, said Rowley. But, he went on to quibble, Islamophobia wasn’t racism.

Truth, truthiness, triangulation: A news literacy toolkit for a “post-truth” world We were guaranteed a free press, We were not guaranteed a neutral or a true press. We can celebrate the journalistic freedom to publish without interference from the state. We can also celebrate our freedom to share multiple stories through multiple lenses. But it has always been up to the reader or viewer to make the reliability and credibility decisions. It is up to the reader or viewer to negotiate truth. More acidic oceans 'will affect all sea life' Image copyright JAGO-TEAM/GEOMAR All sea life will be affected because carbon dioxide emissions from modern society are making the oceans more acidic, a major new report will say. The eight-year study from more than 250 scientists finds that infant sea creatures will be especially harmed.

Republicans rigged our democracy. Here's how Democrats can fight back Donald Trump wasn’t elected because Democrats lost a policy fight in 2016. What Democrats did was lose a procedural fight that has been going on since the early 1990s, when Republicans began waging a relentless, brutal, and completely one-sided war, systematically using their lawmaking power to disadvantage their adversaries in elections and political mobilization. Gerrymandering, the Citizens United atrocity that declared money is speech, blocking US supreme court nominations and obstructing legislation are some of the Republican party’s tactics.

Trending stories on Indian Lifestyle, Culture, Relationships, Food, Travel, Entertainment, News & New Technology News The Sikh community is known for its kind gesture and benevolence. In a recent incident that will restore our faith in humanity, the community has offered free meals to fellow American government employees after they were caught amid the shutdown that has left thousands without pay. The Gurdwara menu which includes lentils, vegetables, rice and tortillas helped the employees in San Antonio, Texas. The shutdown which has been in its fourth week has left roughly 8 lakh federal government workers without work in key departments.

Sorting the Real Sandy Photos From the Fakes With Hurricane Sandy approaching the New York metro area, the nation's eyes are turning to its largest city. Photos of storms and flooding are popping up all over Twitter, and while many are real, some of them -- especially the really eye-popping ones -- are fake. This post, which will be updated over the next couple of days, is an effort to sort the real from the unreal. It's a photograph verification service, you might say, or a pictorial investigation bureau. If you see a picture that looks fishy, send it to me at alexis.madrigal[at]gmail.com. The Best Emergency Preparedness Supplies for 2019: Reviews by Wirecutter The key tools to have on hand for an emergency—everything from an atlas to good duct tape—are also key tools to have on hand for life in general. A common theme that we noticed in this category is that while a great tool can be a genuine joy to use and serve you well for years (if not decades), cheap imitators will waste both your money and your time. Go for the good stuff. —KT Gas shut-off tool If you smell, hear, or see evidence of a gas leak in the aftermath of an earthquake or some other disaster, your first priority is to turn your gas off.

Did Obama's Last 3 Years See More Jobs Created Than Trump's First 3? Yes In February 2020, we received multiple inquiries from readers about the veracity of social media posts and news articles which claimed that the U.S. economy had added 1.5 million more jobs during former President Barack Obama’s final three years in office, than it did during President Donald Trump’s first three years. On Feb. 17, Rep. Carolyn Maloney, D-New York, tweeted that Obama had “created 1.5 million more jobs in his last 3 years than Donald Trump has in his first 3 years.” Earlier, the left-leaning Democratic Coalition group posted a link to a Yahoo! News article with the headline “Trump’s First 3 Years Created 1.5 Million Fewer Jobs Than Obama’s Last 3,” adding “FACT: New figures from Trump’s own Department of Labor show that 6.6 million new jobs were created in the first 36 months of Trump’s tenure, compared with 8.1 million in the final 36 months of Obama’s ― a decline of 19% under Trump.” How to Measure Jobs Growth

Iwao Takamoto Early life and career[edit] After the bombing of Pearl Harbor, Takamoto's family, like many Japanese Americans, was forced to move to an internment camp. They spent the rest of World War II in the Manzanar internment camp. Manufacturer Confirms Installing Remote-Access Software on U.S. Voting Machines CHANGING ITS STORY. Election hacking is at the top of everyone’s mind right now, thanks to the controversy surrounding the 2016 Presidential election. But a new report by Motherboard suggests the issue is far from new. On Tuesday, the outlet published an article in which it claims it obtained a letter sent by Election Systems and Software (ES&S) (the company responsible for manufacturing the majority of voting machines used in the U.S.) to Senator Ron Wyden (D-OR) in April. In the letter, ES&S reportedly admits that it sold election-management systems (EMSs) equipped with pcAnywhere, a software program typically used by system administrators as a way to access computers remotely, to “a small number of customers” between 2000 and 2006. In a report published by the New York Times in February, the company denied any knowledge of selling machines containing this software.

This Ad Was Rejected By The Oscars For Being “Too Graphic”, But It Shows The Reality Of A New Mom As Hollywood’s A-list celebrities were walking down the red carpet at this year’s Academy Awards, a new Frida Mom postpartum ad was causing controversy for not being accepted to the party. ABC refused to show the commercial during their three-hour broadcast of the Oscars, saying it was “too graphic”. The clip shows a new mom during the first days after giving birth, facing the effects it has had on her body.