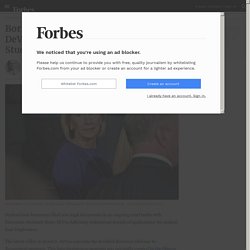 The latest volley in Sweet v. DeVos concerns the troubled Borrower Defense to Repayment program. This loan forgiveness program was originally created by the Obama administration to provide student debt relief to students who were misled, defrauded, or otherwise harmed by predatory colleges and universities – often, for-profit schools. Under Secretary DeVos, the Department of Education has been trying to rewrite the rules governing the Borrower Defense program.

- The Washington Post. 'My classroom has asbestos and bats': a message for Betsy DeVos. Secretary DeVos, this is what American teachers want you to know about their struggles. 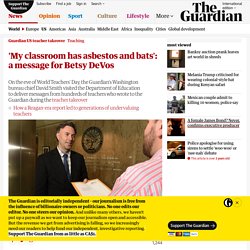 In September, the Guardian invited a team of public school teachers to serve as guest editors of our site and share their stories of teaching in America. As part of the project, our teacher-editors published a manifesto entitled “We shouldn’t be on food stamps: Teachers on how to fix America’s education system”. We also invited teachers in our audience to contribute their own stories to the document, and promised to deliver their messages to Secretary of Education Betsy DeVos. We received responses from hundreds of teachers across the country, and today, we are publishing a representative sample of those messages. On Thursday, the Guardian’s Washington bureau chief, David Smith, paid a surprise visit to the Department of Education and delivered the original document and this new collection of messages to an official Betsy DeVos’s education department. 1. 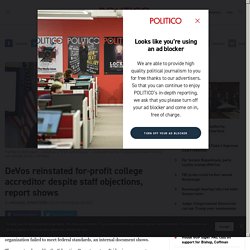 The report, released by the Education Department on Friday in response to a Freedom of Information Act lawsuit, shows that career department analysts had serious concerns about restoring the federal recognition of the Accrediting Council for Independent Colleges and Schools just a month before DeVos issued an order reinstating the accreditor’s federal status. Story Continued Below Career analysts wrote in the report that ACICS failed to meet 57 of the 93 criteria that accreditors are required to meet under federal law.

The Obama administration’s termination of ACICS in 2016 was based on its findings that the accreditor had not followed 21 of the standards, though its review was more limited in scope. Stewart Humor. Betsy DeVos Was A Disgrace On “60 Minutes” But It Doesn’t Matter. On Sunday evening, Betsy DeVos went viral in the worst way. 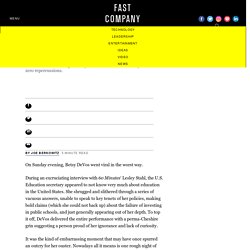 During an excruciating interview with 60 Minutes‘ Lesley Stahl, the U.S. Education secretary appeared to not know very much about education in the United States. She shrugged and slithered through a series of vacuous answers, unable to speak to key tenets of her policies, making bold claims (which she could not back up) about the failure of investing in public schools, and just generally appearing out of her depth. West Virginia Teachers Win; DeVos Gets Pushback : NPR Ed. Secretary of Education Betsy DeVos visited Marjory Stoneman Douglas High School in Parkland, Fla., and met with staff and survivors of the February shooting. 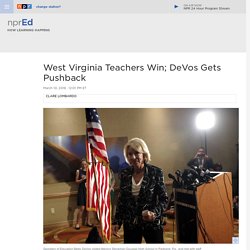 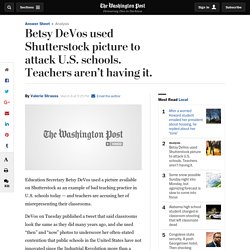 DeVos on Tuesday published a tweet that said classrooms look the same as they did many years ago, and she used “then” and “now” photos to underscore her often-stated contention that public schools in the United States have not innovated since the Industrial Revolution more than a century ago (see the tweet below). The “now” picture is available, royalty-free, on Shutterstock.com; it is the first picture that appears under the search term “classroom.” Does this look familiar? Students lined up in rows. A teacher in front of a blackboard. The photos and language in the tweet came from a presentation she made on Tuesday at the SXSW EDU conference in Austin: Pictures are said to be worth a thousand words. Education Department Wants To Protect Student Loan Debt Collectors : NPR Ed. Updated at 11:09 a.m. 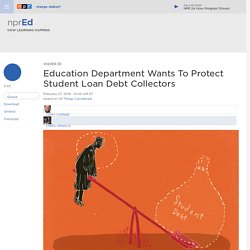 ET Student loan debt collectors have been accused of deceiving and abusing student borrowers and have been sued by attorneys general in a handful of states. Now, they may be getting some relief. The debt collectors, that is. Not their customers. In an internal document obtained by NPR, the U.S. "Congress created and expanded the Direct Loan Program with the goal of simplifying the delivery of student loans to borrowers, eliminating borrower confusion, avoiding unnecessary costs to taxpayers, and creating a more streamlined student loan program," the memo reads. The memo, which was first reported by Bloomberg, has not been officially released; it marks the latest move by the Trump administration to align itself with debt collectors over the nation's 44 million student loan borrowers. 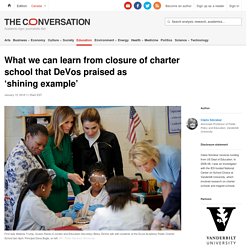 Melania Trump called the charter school “an exceptional example of a school preparing young women both academically and personally so that they may succeed in a global community.” The visit made international headlines due to the fact that it also featured Queen Rania Al-Abdullah of Jordan. In terms of publicity, a school could not ask for a better platform.

Unfortunately, we now know the praise the school got during its brief time on the world stage did not match its poor performance. On Jan. 11, the DC Public Charter School Board voted unanimously, 6-0, to shut down the Pre-K-8, all-girls school at the end of the current school year. This past September, the U.S. Betsy DeVos – Extreme Image Makeover as Champion of Special Needs Children. Secretary of Education Betsy DeVos testifies during a hearing before the Labor, Health and Human Services, Education and Related Agencies Subcommittee of the House Appropriations Committee on May 24, 2017 on Capitol Hill in Washington, DC. 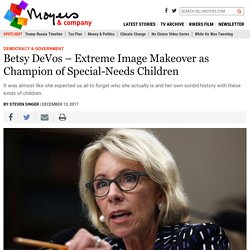 (Photo by Alex Wong/Getty Images) This post originally first appeared at Common Dreams. Trump Donates To Education Department : NPR Ed. Secretary of Education Betsy DeVos speaks about a donation from President Trump to the Department of Education during the daily press briefing at the White House. 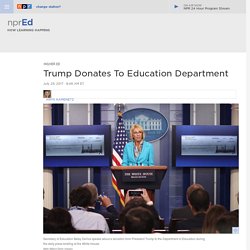 Mark Wilson/Getty Images hide caption toggle caption Mark Wilson/Getty Images. Deeply Unpopular, DeVos and ALEC in Lockstep in Trying to Destroy Public Education. Education Secretary Betsy DeVos’ speech to the American Legislative Exchange Council met with protests before she’d even arrived in Denver. But teachers and activists aren’t the only ones objecting to the extreme, anti-public education agenda DeVos shares with ALEC. One of the great questions of our time is just how far to the fringe the right wing of the Republican Party can march before the business-minded set steps in and yanks the chain.

Hundreds marched from the state Capitol in Denver to the Hyatt Regency, the site of the speech, with signs reading: "Dump Betsy DeVos," "Take Devouchers Elsewhere" and "Stop School Privatization! " Betsy-devos-undermines-civil-rights?akid=15877.2675170. Photo Credit: a katz / Shutterstock.com Randi Weingarten, president of the American Federation of Teachers, joins us to discuss recent developments with billionaire Education Secretary Betsy DeVos, a longtime backer of charter schools and vouchers for private and religious schools. DeVos said earlier this month that she wanted to return the Education Department’s Office for Civil Rights "to its role as a neutral, impartial, investigative agency. " An official with the office came under fire last week after she said that most campus rape claims amount to two young people who are "both drunk.

" Meet Betsy DeVos, Trump's Secretary of Education Nominee. Donald Trump's nominee for Secretary of Education, billionaire Betsy DeVos, has no education degree or teaching experience, has never attended a public school or sent her children to one, and supports the funding of for-profit Christian schools over public ones; she got the job because she donated $9.5 million to Trump's campaign. See Example(s) Collected via e-mail, November 2016. What American parents with kids in public school need to know about Betsy DeVos, Trump's pick for education secretary — Quartz. On his first visit to America in 1842, Charles Dickens found plenty to ridicule—America’s money obsession, their manners, their tobacco chewing habits. But the biggest target of Dickens’ humor was New Yorkers. Specifically, their pigs. Stepping onto Broadway, New York’s biggest commercial thoroughfare, Dickens encountered “two portly sows” and “a select party of half-a-dozen gentlemen hogs” among the brightly dressed ladies and a bustle of coaches.

Even more than this strange sight of pigs roaming the city’s streets, Dickens was captivated by the free and easy swine lifestyle—a “roving, gentlemanly, vagabond kind of life.” Scavenging curbside trash in droves, New York’s wandering pigs were on “equal, if not superior footing” with humans—a model of self-sufficiency. “They are never attended upon, or fed, or driven, or caught, but are thrown upon their own resources in early life, and become preternaturally knowing in consequence,” remarked Dickens in American Notes. How Betsy DeVos Used God and Amway to Take Over Michigan Politics.

On election night 2006, Dick DeVos, the bronzed, starched 51-year-old scion of Michigan’s wealthiest family, paced to a lectern in the dim ballroom of the Sheraton Hotel in Lansing to deliver the speech that every candidate dreads. The Michigan gubernatorial race that year had been a dogfight of personal attacks between DeVos, the Republican nominee, and Democratic Governor Jennifer Granholm. Gloomy, bleached-out b-roll of shuttered factories in anti-Granholm ads made the governor’s sunny economic promise that “You’re gonna be blown away” sound less like an aspiration than a threat.