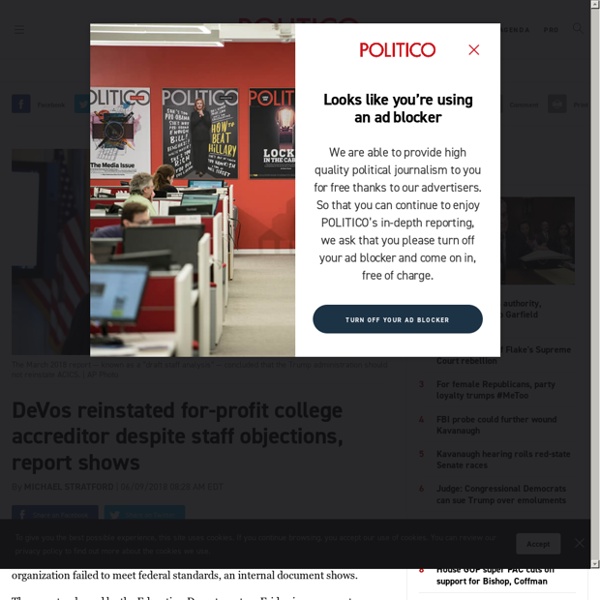 Education Secretary Betsy DeVos earlier this year reinstated an accreditor of for-profit colleges despite findings by her agency’s career staff that the organization failed to meet federal standards, an internal document shows. The report, released by the Education Department on Friday in response to a Freedom of Information Act lawsuit, shows that career department analysts had serious concerns about restoring the federal recognition of the Accrediting Council for Independent Colleges and Schools just a month before DeVos issued an order reinstating the accreditor’s federal status. Story Continued Below Career analysts wrote in the report that ACICS failed to meet 57 of the 93 criteria that accreditors are required to meet under federal law. The Obama administration’s termination of ACICS in 2016 was based on its findings that the accreditor had not followed 21 of the standards, though its review was more limited in scope.

Related:  How it works • Money RULES Politics • Pence and other Henchpersons

How the mega-rich are preparing for the apocalyse - CNN Style Written by Elizabeth Stamp, CNN Say "doomsday bunker" and most people would imagine a concrete room filled with cots and canned goods. The threat of global annihilation may feel as present as it did during the Cold War, but today's high-security shelters could not be more different from their 20th-century counterparts. A number of companies around the world are meeting a growing demand for structures that protect from any risk, whether it's a global pandemic, an asteroid, or World War III -- while also delivering luxurious amenities. "Your father or grandfather's bunker was not very comfortable," says Robert Vicino, a real estate entrepreneur and CEO of Vivos, a company he founded that builds and manages high-end shelters around the world.

If Brett Kavanaugh makes it through, women’s anger will be unstoppable “Do you want to be arrested?” the cop asks Amy Schumer. “Yes” she says simply. She was one of the 302 women held after protesting at a Senate office building against the likely confirmation of Brett Kavanaugh to the US supreme court. They were arrested for “unlawfully demonstrating”. One of the chants in the crowd was: “This is what democracy looks like.”

Nearly half of tenants who make complaint face 'revenge eviction' Nearly half of all tenants who make a formal complaint about their housing suffer a “revenge eviction” by private landlords, according to research by Citizens Advice. It estimated that 141,000 tenants have been subject to “complain and you’re out” evictions since 2015. The evictions are possible because section 21 notices under the 1988 Housing Act allow landlords to force out tenants on a no-fault basis. Citizens Advice found that tenants who had received a section 21 notice were twice as likely to have complained to their landlord – and eight times more likely to have complained to an official redress scheme.

Trump backer who owned 'inhumane' housing picked to be Belgium envoy A major financial backer of Donald Trump’s presidential campaign, who once owned a housing estate in which low-income tenants were said to endure “inhumane” living standards, has been nominated as the US ambassador to Belgium. Ron Gidwitz, a 73-year-old businessman from Chicago gave Trump and other Republicans $700,000 in 2016, and acted as the presidential candidate’s campaign finance chair in Illinois. He will now undergo a month in a US state department “ambassadorial school” before making the move to Brussels. There is a certain amount of relief in Belgium that the nomination has been made at all – more than a year after the last US ambassador left the country’s embassy in Brussels. But Gidwitz could yet prove to be a controversial pick in the mould of Pete Hoekstra, Trump’s ambassador to the Netherlands, who was forced to apologise over his suggestion that immigration from majority Islamic countries had created “no-go zones” in the country. “I didn’t even ask for this one ...

Why are Republicans ramming Brett Kavanaugh on to the supreme court? They blocked Barack Obama’s pick for the supreme court. They threw in their lot with Donald Trump, a political neophyte and TV celebrity facing multiple sexual harassment allegations. It is entirely unsurprising that the Republican party seems ready to ram through the confirmation of Brett Kavanaugh. Their logic: the end justifies the means. Republicans are aware that presidents, senators and representatives come and go, but supreme court appointments are for life. They aim to capture the court – with its power to shape abortion rights, worker protections and who gets to vote – for a generation.

Billionaires v teachers: the Koch brothers' plan to starve public education Arizona has become the hotbed for an experiment rightwing activists hope will redefine America’s schools – an experiment that has pitched the conservative billionaires the Koch brothers and Donald Trump’s controversial education secretary, Betsy DeVos, against teachers’ unions, teachers and parents. Neither side is giving up without a fight. With groups funded by the Koch brothers and DeVos nudging things along, Arizona lawmakers enacted the nation’s broadest school vouchers law, state-funded vouchers that are supposed to give parents more school choice and can be spent on private or religiously affiliated schools. For opponents, the system is not about choice but about further weakening the public school system. A half-dozen women who had battled for months against the legislation were angry as hell.

Here are the US Senators who voted NO on the net neutrality CRA, and how much money they have taken… The US Senate just voted 52 to 47 to block the FCC’s repeal of net neutrality and restore protections that prevent ISPs like Comcast and Verizon from controlling what we see and do online with censorship, throttling, and expensive new fees. Now, we need to move our focus to the House. Our best chance to force a vote will be between now and the midterm elections. Head over to BATTLEFORTHENET.COM now to tell your House Representative to vote for the net neutrality CRA. This was a simple up or down vote on the freedom of the open internet. Yahoo fait dÃ©sormais partie dâOath A year ago almost to the day, Vice President Mike Pence arrived at an Indianapolis Colts game against the San Francisco 49ers, ostensibly to watch the Colts honor former franchise QB Peyton Manning. But when several members of the 49ers knelt during the national anthem, Pence, his wife, and his security team walked out. The move drew praise from the president.

Americans Want to Believe Jobs Are the Solution to Poverty. They’re Not. To afford basic necessities, the federal government estimates that Vanessa’s family would need to bring in $29,420 a year. Vanessa is not even close — and she is one of the lucky ones, at least among the poor. The nation’s safety net now strongly favors the employed, with benefits like the earned-income tax credit, a once-a-year cash boost that applies only to people who work.

I'm a millionaire who creates zero jobs. Why do I pay less tax than you? In 2013, just a few years after the 2008 financial crisis, I was part of BlackRock’s Financial Markets Advisory Group working for the Greek Central Bank, assessing the capital requirements of the bailouts of the Greek banks. I was on the top floor of a bank building in Athens with about 20 bank executives taking a lunch break, when I glanced out the window and saw a huge crowd of people on the street. For a moment I thought it was a parade, and then I realized it was something between a protest and a riot. As I looked out the window to the heated crowd below, and looked behind me to the well–fed bankers at the table, I wondered if I was actually helping anyone beyond the people having lunch with me. A few months later, I left a 30-year career on Wall Street to work full time as chair of the board of the Patriotic Millionaires. I haven’t looked back since.

Related:
Related:  How it works   -  Money RULES Politics   -  Pence and other Henchpersons