'My classroom has asbestos and bats': a message for Betsy DeVos 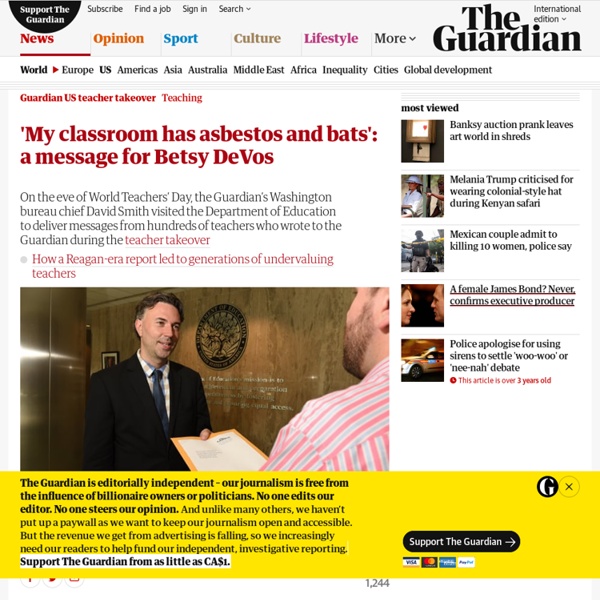 Secretary DeVos, this is what American teachers want you to know about their struggles. In September, the Guardian invited a team of public school teachers to serve as guest editors of our site and share their stories of teaching in America. As part of the project, our teacher-editors published a manifesto entitled “We shouldn’t be on food stamps: Teachers on how to fix America’s education system”. We also invited teachers in our audience to contribute their own stories to the document, and promised to deliver their messages to Secretary of Education Betsy DeVos. We received responses from hundreds of teachers across the country, and today, we are publishing a representative sample of those messages. On Thursday, the Guardian’s Washington bureau chief, David Smith, paid a surprise visit to the Department of Education and delivered the original document and this new collection of messages to an official Betsy DeVos’s education department. 1. “My first classroom had asbestos and bats. 2. 3.

Pence NFL walkout political planned stunt - who pays the cost A year ago almost to the day, Vice President Mike Pence arrived at an Indianapolis Colts game against the San Francisco 49ers, ostensibly to watch the Colts honor former franchise QB Peyton Manning. But when several members of the 49ers knelt during the national anthem, Pence, his wife, and his security team walked out. The move drew praise from the president. But many observers called it a stunt, a deliberate performance meant to whip up the base, and newly released documents indicate that Pence’s walkout was anything but a spontaneous demonstration of patriotic outrage. Why Pence walked out

Trump's Budget Wouldn't Erase Deficits, CBO Said Under President Donald Trump’s proposed budget for fiscal year 2018, there would have been hundreds of billions of dollars in deficits each year from 2018 to 2027, according to projections from the nonpartisan Congressional Budget Office. That contradicts Acting White House Chief of Staff Mick Mulvaney’s claim that the U.S. “would actually be on a glide path to balancing the budget” had Congress enacted Trump’s desired plan. CBO did say that deficits and debt would be lower under Trump’s plan than they would have otherwise been under law at the time. But, while the Office of Management and Budget projected that Trump’s budget would add $3.2 trillion to the deficit over that 10-year period, CBO estimated deficits would increase by $6.8 trillion.

60,000 tons of dangerous radioactive waste sits on Great Lakes shores More than 60,000 tons of highly radioactive spent nuclear fuel is stored on the shores of four of the five Great Lakes — in some cases, mere yards from the waterline — in still-growing stockpiles. “It’s actually the most dangerous waste produced by any industry in the history of the Earth,” said Gordon Edwards, president of the nonprofit Canadian Coalition for Nuclear Responsibility. The spent nuclear fuel is partly from 15 current or former U.S. nuclear power plants, including four in Michigan, that have generated it over the past 50 years or more. But most of the volume stored along the Great Lakes, more than 50,000 tons, comes from Canadian nuclear facilities, where nuclear power is far more prevalent. It remains on the shorelines because there's still nowhere else to put it. The U.S. government broke a promise to provide the nuclear power industry with a central, underground repository for the material by 1998.

DeVos reinstated for-profit college accreditor despite staff objections, report shows Education Secretary Betsy DeVos earlier this year reinstated an accreditor of for-profit colleges despite findings by her agency’s career staff that the organization failed to meet federal standards, an internal document shows. The report, released by the Education Department on Friday in response to a Freedom of Information Act lawsuit, shows that career department analysts had serious concerns about restoring the federal recognition of the Accrediting Council for Independent Colleges and Schools just a month before DeVos issued an order reinstating the accreditor’s federal status. Story Continued Below Career analysts wrote in the report that ACICS failed to meet 57 of the 93 criteria that accreditors are required to meet under federal law. The Obama administration’s termination of ACICS in 2016 was based on its findings that the accreditor had not followed 21 of the standards, though its review was more limited in scope.

Does This Video Show a Man Ripping the MAGA Hat Off a Trump Supporter? A video shows a white man ripping the “MAGA” hat off the head of a black Trump supporter in a Starbucks. On 25 October 2018, the Instagram account “funny__marco_” shared a video that purported to show an altercation in a Starbucks between a black man wearing a Make America Great Again (MAGA) hat and a white man who ripped it off his head in anger: The video was captioned, like so many others of its time, with a call for fans to follow a YouTube channel — a channel featuring many other bits of staged, awkward, or humorous confrontations.

Trump is using the government as a bargaining chip – like a dictator would “I have the absolute right to do national emergency if I want,” Donald Trump told reporters on Wednesday. The wonderful thing about Trump’s presidency (I never thought I’d begin a sentence this way), is he brings us back to basics. The basic difference between a democracy and a dictatorship comes down to means and ends. Democracy is about means, not ends. If we all agreed on the ends (such as whether to build a wall along the Mexican border) there’d be no need for democracy. But of course we don’t agree, which is why the means by which we resolve our differences are so important.

Suicide more prevalent than homicide in US, but most Americans don't know it In the United States, suicide is twice as common as homicide -- and more often involves firearms -- but public perception is just the opposite. News reports, movies and TV shows may contribute to the perception of a high risk of firearm homicide, authors of a new study say, leaving a substantial gap between ideas and reality and potentially leading to further danger. Now, first-of-its kind research, led by the University of Washington, Northeastern University and Harvard University, delves into public perceptions of gun violence and the leading causes of death in the U.S.

Betsy DeVos Was A Disgrace On “60 Minutes” But It Doesn’t Matter On Sunday evening, Betsy DeVos went viral in the worst way. During an excruciating interview with 60 Minutes‘ Lesley Stahl, the U.S. Education secretary appeared to not know very much about education in the United States. Do Uncancelled Stamps Prove Mail Bombs Were Not Sent Through the USPS? The lack of postmarks on explosive devices mailed to Democratic officials proves those items were not sent through the USPS. In October 2018, multiple parcels housing mail bombs were sent to various Democrats and critics of President Trump, including the Clintons, the Obamas, Joe Biden, George Soros, and actor Robert de Niro. According to various accounts, the packages included “explosive devices made from PVC pipe and contained a timer (likely a digital alarm clock) to set off the detonator.

Older Workers See Lower Response Rates From Recruiters Getty Images Boomer applicants receive a lower rate of response from employers than millennials. If you feel like submitting your résumé for a job is the equivalent of sending it into a black hole, the problem might be with how old your résumé makes you look.