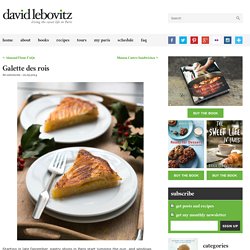 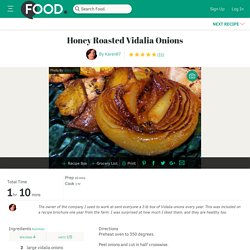 Browse By: Next Recipe Stumped for dinner? Baby Kato Recipe Box Grocery List Print Share. Recipe: Omega Boost Beetroot & Blackcurrant Energy Bars - The Veg Space. This is a sponsored post Getting enough of all the right vitamins and minerals in a vegetarian or vegan diet is probably one of the first arguments veggie-sceptics will put to me when challenging my dietary choices. 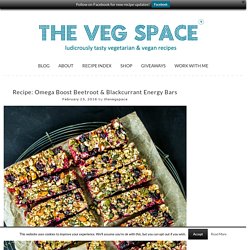 There have been certain points when people seemed particularly concerned for me, such as when I was pregnant, (“are you sure it’s safe to be vegetarian? Perhaps just an occasional steak?”) Slow-Cooker Chicken Tikka Masala Recipe. Mexican Quinoa, Mexicans and Quinoa. {Slow Cooker} Mexican Quinoa. Wine Tasting - The Napa Wine Project. Our favorite time in Napa Valley is in early Spring during the middle of the week; everything is green, bud break has already occurred, the grapes are leafing out, the summer crowds have not yet hit, and as a result there is less traffic and the weather is usually decent. 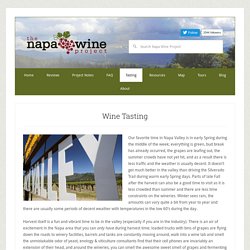 It doesn’t get much better in the valley than driving the Silverado Trail during warm early Spring days. Parts of late Fall after the harvest can also be a good time to visit as it is less crowded than summer and there are less time constraints on the wineries. Winter sees rain, the amounts can vary quite a bit from year to year and there are usually some periods of decent weather with temperatures in the low 60’s during the day. Cheesy Cauliflower Biscuits. Think back on the days of the restaurant bread basket—endless amounts of bread with butter or olive oil delivered to your table as soon as you sat down. 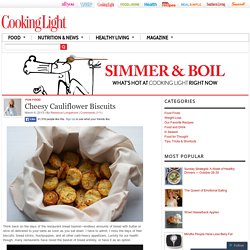 How to Preserve 100+ lbs. of Tomatoes With Almost No Work. Tomatoes are one of the main crops that I preserve. 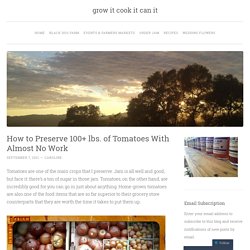 Jam is all well and good, but face it: there’s a ton of sugar in those jars. Tomatoes, on the other hand, are incredibly good for you can go in just about anything. Home-grown tomatoes are also one of the food items that are so far superior to their grocery store counterparts that they are worth the time it takes to put them up. Vegetables are so labor-intensive to grow that it makes me cringe when they finally ripen in such abundance that some are left to rot or are simply fed to animals. 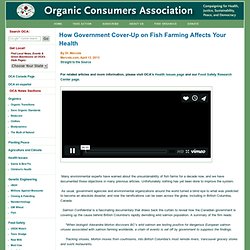 Many environmental experts have warned about the unsustainability of fish farms for a decade now, and we have documented those objections in many previous articles. Unfortunately nothing has yet been done to improve the system. As usual, government agencies and environmental organizations around the world turned a blind eye to what was predicted to become an absolute disaster, and now the ramifications can be seen across the globe, including in British Columbia, Canada. Salmon Confidential is a fascinating documentary that draws back the curtain to reveal how the Canadian government is covering up the cause behind British Columbia's rapidly dwindling wild salmon population.

How to Make a Perfect Frittata. A well-made frittata is one of the world's most perfect foods. 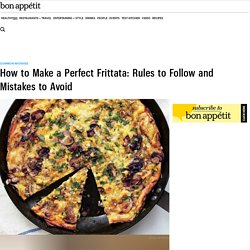 It's cheap, quick-cooking, and an efficient vehicle for leftovers—not to mention equally delicious at breakfast, lunch, and dinner. But a poorly-made frittata is just tragic. We've all had a sub-par frittata; they're spongy rather than custardy, dry, and flavorless. Don't suffer the same fate with your next skillet of baked egg goodness: Avoid these common frittata mistakes. 1. Take it from Dawn Perry, BA digital food editor: "Dairy turns an ordinary omelet into a delicious, creamy egg cake. " Pumpkin, Leek, & Pecan Cornbread with Spicy Honey. Guys, this is the prettiest cornbread I’ve ever made. 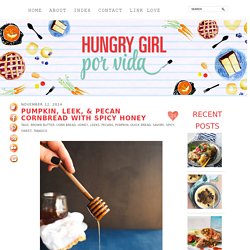 I first saw it on Megan’s blog and thought it was such a stunnner back then, and I finally got around to making it. I’m so glad I did! Uncorked: Blind taste like a sommelier. Blind tasting wine is a true art form; however, anyone can learn how to do it. 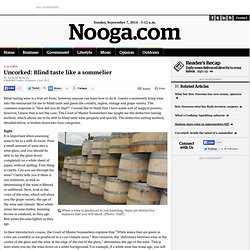 Guests consistently bring wine into the restaurant for me to blind taste and guess the country, region, vintage and grape variety. The common response is “How did you do that?” Mini Corn Bread Crab Cakes with Lemon-Caper Sauce Recipe Print Page. Lemon-Herb Potato Salad Recipe. 22 Potato Salad Recipes. Spinach, mushroom & feta crustless quiche. I’m a big fan of savory breakfasts and this one might be my new favorite. It has endless possibilities and is a cinch to make. …plus, it reheats well in the microwave for a quick dinner! A quiche is basically an egg and milk custard filled with all sorts of other things (usually cheese and vegetables). Traditionally, quiches are baked into a pie crust but I felt that I had enough cheese in here to cover my fat ration for the day so I just skipped the crust.

If you want your quiche in a crust, make this super simple 60 second pie crust. To make this recipe extra economical, use vegetables that are in season and on sale for a low price. Spinach, mushroom & feta crustless quiche. 5 Delicious Green Smoothies For Beginners. Smitten kitchen. Martha Stewart's Cooking School. A Dash of This, A Pinch of That - Creative Cooking at Newport Cooks! Cauliflower "Fried Rice" - Domesticate ME!