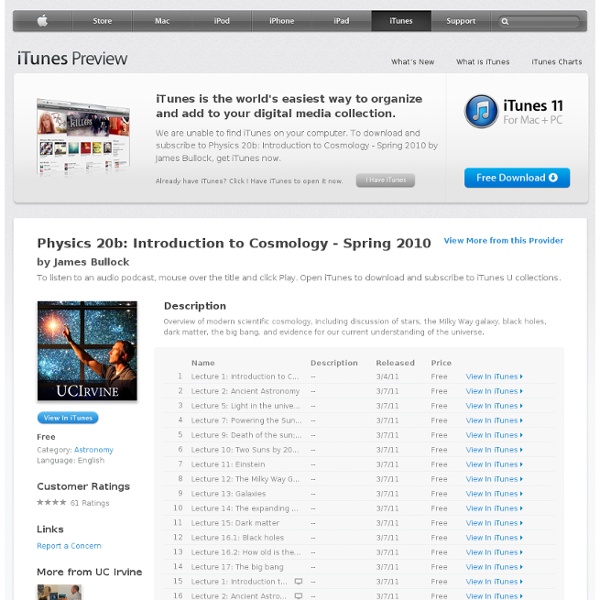 Description Overview of modern scientific cosmology, including discussion of stars, the Milky Way galaxy, black holes, dark matter, the big bang, and evidence for our current understanding of the universe. Customer Reviews Great content, but audio is seriously lacking by AngryFanOfBirds Great content and the professor is very good at giving real-world analogies which are easy to comprehend. ...More amazing by RRO3 This man is amazing. Fantastic… But need a mic by VernontheIII This is a wonderful podcast.

Heads Up, Hoverboarders: Here Comes Quantum Levitation Few motifs of science fiction cinema have been more appealing to us than the subtle defiance of gravity offered by futuristic hovercraft. So every once in a while we check in to see how humanity is progressing on that front, and whether the promise of hoverboards will be delivered by 2015 as evidenced in Back to the Future Part 2. We’re not quite there yet, but we’re definitely getting off the ground, so to speak. Get ready to hover your brain around the art of quantum levitation. That’s right, quantum. Video Courses on Academic Earth Astronomers use tools like telescopes, cameras and spectrographs to study interactions between materials and energy within the universe. These scientists learn about galaxies, solar systems, planets and stars through careful observation and measurement recording. Astronomers also refer to natural sciences and mathematics to form and test theories. An integral part of a student’s astronomy experience is the quality of equipment and facilities they have access to.

Daylight Hrs Explorer Shows the hours of daylight received during the year for an observer at a given latitude. This is an important factor contributing to the seasons. Running this animation on your computer... Electrical Engineering Circuit Theory - Wikibooks , 2013This is an introductory text about electric circuits. It covers the basics of electric circuit theory, circuit analysis, and touches on circuit design. It is a companion reference for a 1st year of an Electrical Engineering undergraduate curriculum.(7482 views) United States Navy Electricity and Electronics Training Series by Robert A Gray , 1998This series provides beginners with fundamental electrical and electronic concepts through self-study. The series is designed to give small amounts of information that can be easily digested before advancing further into the more complex material.(2096 views) Study and Implementation of Image and Video Matting Techniques by Siddharth Srivastava, et al. - viXra , 2013Matting is the technique of estimating accurate foreground in images and video.

11 cheap gifts guaranteed to impress science geeks Science comes up with a lot of awesome stuff, and you don't need a Ph.D, a secret lab, or government funding to get your hands on some of the coolest discoveries. We've got a list of 11 mostly affordable gifts that are guaranteed to blow your mind, whether or not you're a science geek. Click on any image to see it enlarged. 1. Aerogel The 6 Most Mind-Blowing Things Ever Discovered in Space #3. A Cold Star Here's the very first lesson you learned about the cosmos: The sun is hot. Particle Creation previous home next PDF Michael Fowler, Pion Production We have mentioned how, using a synchrocyclotron, it is possible to accelerate protons to relativistic speeds. The rest energy of a proton mpc2 is 938 MeV, using here the standard high energy physics energy unit: 1 MeV = 106 eV. The neutron is a bit heavier—mnc2 = 940 MeV.

How Transistors Work" If cells are the building blocks of life, transistors are the building blocks of the digital revolution. Without transistors, the technological wonders you use every day -- cell phones, computers, cars -- would be vastly different, if they existed at all. Before transistors, product engineers used vacuum tubes and electromechanical switches to complete electrical circuits. Tubes were far from ideal. New comet likely to impress when it passes closest to Earth in December By Alan Pickup, The GuardianSunday, October 14, 2012 20:16 EDT A comet found recently beyond the orbit of Jupiter could well become spectacular late next year and may be a sibling of one of the most celebrated comets of all time. What is formally known as Comet C/2012 S1 (ISON) was not at first recognised as a comet when it was spotted as a 19th magnitude object using a small Russian telescope of the International Scientific Optical Network on 21 September. Earlier images have been found stretching back to last year, allowing its orbit to be calculated and showing that it is destined to sweep within 1.2 million km of the Sun’s surface at perihelion on 28 November 2013. Some predictions claim that it could rival the full moon in brightness at that time.