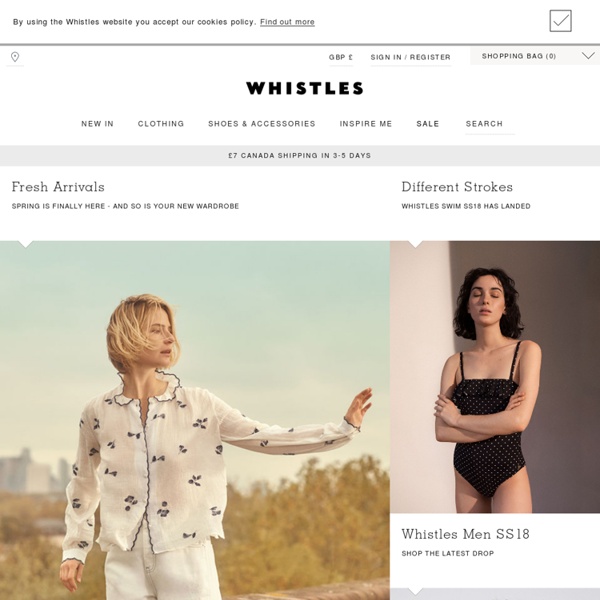 2014-15 YCN Student Awards Design a concept and campaign for the first ever Whistles scent Background Whistles is a leading British contemporary fashion brand that encapsulates an intelligent sense of design with timeless and luxurious pieces. Our collections are modern and laid back with an attention to detail and quality. Since its relaunch in 2008, and under the guidance of inspiring CEO, Jane Shepherdson, Whistles has become a wardrobe staple for fashion editors and industry leaders, characterised by its contemporary and effortless style. In September 2014, Whistles launched its hotly anticipated debut men’s collection. chloe Fall 2016 captures an evocative mix of innocence and sensuality, where the spirit of Balthus’ paintings and Carlo Mollino’s Polaroid girls meets the grunge attitude of a young Björk. The See by Chloé gang unite within this collection, remixing a flirty touch of ‘flou’ with utility shapes in rich, unexpected textures. Checks, stripes, and animalia prints clash against jacquards, denim, and lace – with a layered look that pair voluminous outerwear with relaxed separates. This season’s autumnal colour palette and baroque details, of delicate smocking, needlepoint lace, and tiered ruffles of crepe and cotton, counterbalance the tomboy style of wide-leg patch pocket trousers, henley t-shirts, must-have knits and workwear jackets in corduroy, indigo denim, and leather. Top S6AJH16 S6A080 SDA DARK NIGHT Pants S6AJP04 S6A089 SC6 INK Bracelet 9K7358 P212 001 BLACK Boots SB27025 4002 I770 LAPIS

Whistles conquers the 'middle market' of British womenswear While Marks & Spencer announced a 6.8% drop of general sales last month, another corner of the British high street has been quietly flourishing. Whistles, the clothing brand set up by Lucille Lewin in the 1980s, announced this week that it had bought back the majority of its shares from the Icelandic government, a move which has underlined its growing strength. Whistles, which has been independent since parting ways with the retail group Mosaic in 2008, has gone from strength to strength despite a tough economic climate. Sales were up 13% in 2011 and there was "consistent double digit like for like sales growth," this year, according to a company statement.

Jane Shepherdson Chief Executive at Whistles, Jane Shepherdson is the figurehead of our brand. Originally from Bristol, she studied in London and worked as Brand Director at Topshop. With an uncanny ability to know what women want to wear, she has been working her magic at Whistles since 2008. Releases Monkey Plot: Here I Sit, Knowing All of This LP Moon Relay: Full Stop Etc. LP Kim Myhr: Bloom Kim Myhr: Milk run sky (single) The rise of the high-end street: Zara, Whistles and Cos pioneer a new age for our high-street Like Countryfile and a £1.30 sandwich from dear old M&S (you know the one), the lure of the great British high street is its delicious familiarity. As shoppers with depleted bank balances dancing in our eyes, we head to our favourite multi-faceted fashion mecca to buy the clothes we love at the prices we expect. Surprises — pleasant or otherwise — are few and far between. But change is afoot. Look hard at the rails of Zara and you’ll find that all is not as it seems. While the Spanish-born store has long held its gaze on fashion that is both timely and yours for less than £150, Zara is dipping its toe into the luxury market by including a few carefully chosen high-end pieces.

CleanApp - Clean your Mac CleanApp requires OS X 10.8 Mountain Lion or later. macOS Sierra is supported. An update for customers who bought CleanApp 1,2 or 3 is available for US$ 4.99. Buy CleanAppFor just US$ 14.99 Reclaim hard drive space Creatures of the Wind SS15 Initial reaction: A road trip across the USA culminates in a luxurious wedding in Palm Springs: lush beading on cotton with messy post-car hair and airy silhouettes. Atmospheric inspiration: Why it’s time fashion ditched its ‘tribal’ inspirations On Tuesday, Valentino caused controversy with a show inspired by “wild, tribal Africa” that featured a cast of largely white models wearing bone necklaces and cornrow hairstyles, hitting the runway to the sound of bongos. “Please tell me that there are African Americans modeling in Valentino’s African line,” wrote one Twitter user, pointing out the questionable decision of choosing a line up of fair-skinned girls for a collection supposed to embody “modern day African grace” (only 8 of the show’s almost 90 looks were given to models of colour). With cultural appropriation being one of this year’s biggest talking points – thanks to the likes of Amandla Stenberg, the Dazed cover star and Hunger Games actress who went viral with a video entitled Don't Cash Crop My Cornrows, it seemed a risky move, even if done out of cluelessness rather than malice. Of course, Valentino are far from the first fashion house to get inspired by Africa.

Alexandre Herchcovitch Store - Tokyo Alexandre Herchcovitch has come a long way since his humble beginnings of making his mother's party clothes. Having launched his first collection in 1994, things have only gotten bigger for the Brazilian-born designer. Trained at the Catholic institution Santa Marcelina College of Arts in Sao Paulo, his designs have been sent down the runways of New York, Paris and London. Best known for avant-garde designs and eclectic prints, his trademark skulls became an icon of Brazilian youth in the nineties. 2007 was a memorable year for Herchcovitch. It was a year of branching out, particularly with his redesign of the uniform for McDonald's employees in Brazil, and the opening of his first store abroad.

A Lesson in Style - The Evolution of the Kaftan – Designer Beach Kaftans Worn for thousands of years, by men and women, the kaftan is a simple garment, often cut from a single piece of cloth. Originating from the middle east, the kaftan was typically hip or ankle length, whilst contemporary designs have introduced a knee-length version, that is popular as a versatile beach cover up. The comfortable, loose styling of a kaftan offers a unique combination of both modesty and allure. Asian Designers Bring Diverse Perspectives, Visions to New York Fashion Week From messages of cultural harmony to edgy inspirations sparked by body art, Asian designers brought a diverse range of perspective and vision at this month's New York Fashion Week. A handful of designers shared their personal take on their fall/winter ready-to-wear collections with NBC Asian America, and offered an inside look to the story behind their inspirations this season. Follow NBC Asian America on Facebook, Twitter, Instagram, and Tumblr. Yuna Yang Yuna Yang has dedicated her fall/winter 2016 collection to her personal dream of "No Borders" between religions, races, and all divisions.

Isabel Marant - Spring/Summer 2016 Ready-To-Wear - PFW ISABEL MARANT ticked all of the “Marant” boxes this afternoon: embroidery, tick; bead and mirror embellishment, tick; printed floaty dresses, tick; long and enveloping cardigans, a smattering of sequins and chunky silver jewels to complement it all, tick, tick, tick. Few can capture the insouciant, effortless Parisian vibe that Isabel Marant does so well, and today she continued to nail it. As ever, ethnic details came thick and fast, from the low-slung harem pants referencing the Middle East and the cropped flared jackets with frayed seams and long tassels that hail from India (and Portobello Market a little closer to home) to the Baja-style skirt-cum-trousers and enveloping coats. They, as the Isabel Marant customer expects, exuded the kind of luxury globe-trotter appeal that makes their wearer look like they are showing off expensive sartorial souvenirs. Scarlett Conlon