Traditional Japanese Theatre: Noh and Kabuki by Noé Valenzuela on Prezi. Japanese List: Ringi-sei [稟議制] Ringi-sei, Bottom-up decision making process "The "ringi" system refers to the process of making bottom-up decisions that is common in Japan, especially in the bureaucracy. 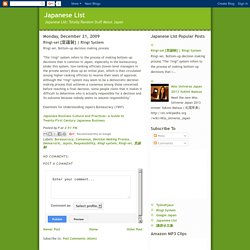 Under this system, low-ranking officials (lower-level managers in the private sector) draw up an initial plan, which is then circulated among higher-ranking officials to receive their seals of approval. Although the "ringi" system may seem to be a democratic decision making process that achieves a consensus among those concerned before reaching a final decision, some people claim that it makes it difficult to determine who is actually responsible for a decision and its outcome because nobody seems to assume responsibility.

" Essentials for Understanding Japan's Bureaucracy (1997) Japanese Business Culture and Practices: A Guide to Twenty-First Century Japanese Business. Free to Be. IT was a typical exercise to promote orderly response. 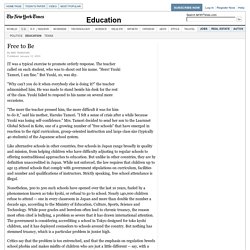 The teacher called on each student, who was to shout out his name. ''Here! Yuuki Tamori, I am fine.'' But Yuuki, 10, was shy. ''Why can't you do it when everybody else is doing it? '' ''The more the teacher pressed him, the more difficult it was for him to do it,'' said his mother, Haruko Tamori. Like alternative schools in other countries, free schools in Japan range broadly in quality and mission, from helping children who have difficulty adjusting to regular schools to offering nontraditional approaches to education. Nonetheless, 300 to 500 such schools have opened over the last 10 years, fueled by a phenomenon known as toko kyohi, or refusal to go to school. Critics say that the problem is too entrenched, and that the emphasis on regulation breeds school phobia and makes misfits of children who are just a little different -- say, with a peculiar mannerism or even curly hair.

The changes have not been embraced in all quarters. The Bosozoku Are Japan's Disappearing Rebels Without A Cause. Ōkuma Shigenobu. Marquess Ōkuma Shigenobu (大隈 重信? 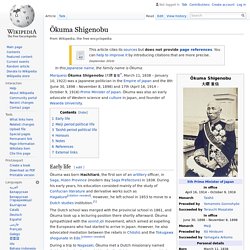 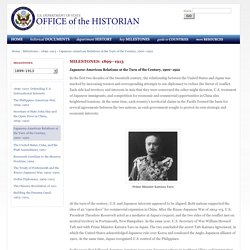 Each side had territory and interests in Asia that they were concerned the other might threaten. U.S. treatment of Japanese immigrants, and competition for economic and commercial opportunities in China also heightened tensions. At the same time, each country’s territorial claims in the Pacific formed the basis for several agreements between the two nations, as each government sought to protect its own strategic and economic interests. Prime Minister Katsura Taro At the turn of the century, U.S. and Japanese interests appeared to be aligned. Empire of Japan. This article is about the former empire. 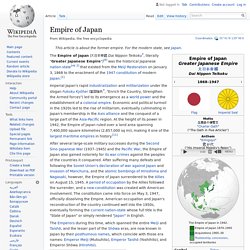 For the modern state, see Japan. The Empire of Japan (大日本帝國, Dai Nippon Teikoku? , literally "Greater Japanese Empire")[8] was the historical Japanese nation-state[nb 2] that existed from the Meiji Restoration on January 3, 1868 to the enactment of the 1947 constitution of modern Japan.[1] Imperial Japan's rapid industrialization and militarization under the slogan Fukoku Kyōhei (富国強兵? JS4 Manabe Befu. Government of Meiji Japan. The Government of Meiji Japan (明治政府 (Meiji seifu?)) 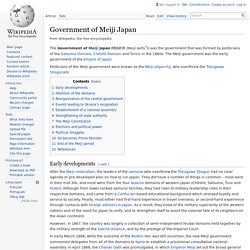 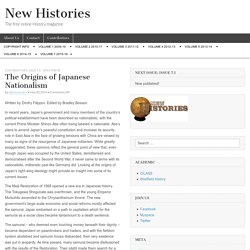 Edited by Bradley Bosson. In recent years, Japan’s government and many members of the country’s political establishment have been described as nationalistic, with the current Prime Minister Shinzo Abe often being labeled a nationalist. Abe’s plans to amend Japan’s peaceful constitution and increase its security role in East Asia in the face of growing tensions with China are viewed by many as signs of the resurgence of Japanese militarism. 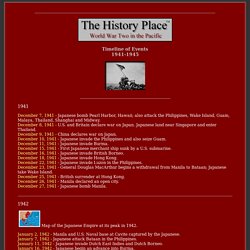 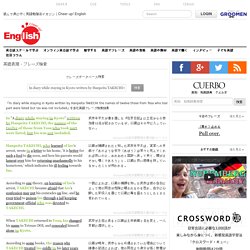 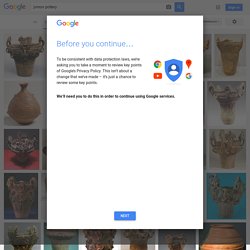 Japanese History. Date Masamune. Date Masamune (伊達政宗? , September 5, 1567 – June 27, 1636) was a regional strongman of Japan's Azuchi-Momoyama period through early Edo period. Heir to a long line of powerful daimyo in the Tōhoku region, he went on to found the modern-day city of Sendai. An outstanding tactician, he was made all the more iconic for his missing eye, and Date was often called dokuganryū (独眼竜), or the "one-eyed dragon".[1] As a legendary warrior and leader, Masamune is a character in a number of Japanese period dramas. He was played by Ken Watanabe in the popular 1987 NHK series Dokuganryu Masamune. Background[edit] Date Masamune was the eldest son of Date Terumune, born in Yonezawa Castle (in modern Yamagata Prefecture). Historical person[edit] Masamune is known for a few things that made him stand out from other daimyo of the time.

Siege of Osaka. Inscription on bell at Hokoji in Kyoto The Siege of Osaka (大坂の役, Ōsaka no Eki? , or, more commonly, 大坂の陣 Ōsaka no Jin) was a series of battles undertaken by the Tokugawa shogunate against the Toyotomi clan, and ending in that clan's destruction. Divided into two stages (Winter Campaign and Summer Campaign), and lasting from 1614 to 1615, the siege put an end to the last major armed opposition to the shogunate's establishment. The end of the conflict is sometimes called the Genna Armistice (元和偃武, Genna Enbu?) , because the era name was changed from Keichō to Genna immediately following the siege. Outset[edit] Sanada Yukimura. Sanada Yukimura (真田 幸村? , 1567 – June 3, 1615), actual name: Sanada Nobushige (真田 信繁?)

, was a Japanese samurai warrior of the Sengoku period. He was especially known as the leading general on the defending side of the Siege of Osaka. Early life[edit] Japan History in 8 minutes!! Ye Wanyong. Ye Wanyong (pronounced [iː wan.joŋ]; 17 July 1858, Seongnam – 12 February 1926), also known as Yi Wanyong, was a pro-Japanese minister of Korea, who signed the Japan-Korea Annexation Treaty, which placed Korea under Japanese rule in 1910.

Early life and education[edit] Born to a prominent family in Gyeonggi-do province, Ye spent three years in the United States from 1887–1891. Ye was a founding member of the Independence Club established in 1896 and belonged to the ‘reform faction’ which wanted to westernize Korea and to open the country to foreign trade[citation needed]. The Madness of Hideyoshi. | Home | Recent Updates| Links | Recommended Reading | Sign the Guestbook | View the Guestbook | By Marcel Thach Following the 150 years of civil conflict known as the Sengoku-jidai, (best translated as "The Age of War") Japan entered the Azuchi-Momoyama-jidai which is better known to the West as the War of Unification. To the Japanese, the Azuchi-Momoyama period is a period of reverence and heroism.

It was a time when 'inferiors overthrew their superiors' (Perdue, 23.) Three daimyo (feudal lords) are known to history as the Unifiers: Oda Nobunaga,Toyotomi Hideyoshi, and Tokugawa Ieyasu. Toyotomi Hideyoshi. Toyotomi Hideyoshi (豊臣 秀吉? , February 2, 1536 or March 26, 1537 – September 18, 1598) was a preeminent daimyo, warrior, general, samurai, and politician of the Sengoku period[1] who is regarded as Japan's second "great unifier".[2] He succeeded his former liege lord, Oda Nobunaga, and brought an end to the Warring States period. [clarification needed] The period of his rule is often called the Momoyama period, named after Hideyoshi's castle.

After his death, his young son Hideyori was displaced by Tokugawa Ieyasu. Dalit. Dalits are a mixed population, consisting of groups across South Asia. They speak a variety of languages and practice various religions. With the Scheduled Castes at 16.6% and Scheduled Tribes at 8.6%, the Dalits and Adivasis together make up 25% of India's population according to the 2011 census.[10][11][12] Genuine information about Japan by the Japanese. Discover great restaurants, amazing places and unique culture! キッズ@nifty. Japanese Cities. Japanese Cities. List of political parties in Japan. This article lists political parties in Japan.

Major parties[edit] Other parties currently represented in the national Diet[edit] Legal status as political party (seitō) is tied to having five members in the Diet or at least two percent nationally of either proportional or local vote in the last Representatives or one of the last two Councillors elections. Political parties receive public party funding (¥ 250 per citizen, about ¥ 32 bill. in total per fiscal year, distributed according to recent national elections results – last HR general and last two HC regular elections – and Diet strength on January 1), are allowed to concurrently nominate candidates for the House of Representatives in an electoral district and on a proportional list, may take political donations from legal persons, i.e. corporations, and other benefits such as air time on public broadcaster NHK.[2] House of Representatives Election in 2012 House of Councilors Election in 2013 Prefectural and local parties[edit]

What Harajuku Girls Really Look Like. Japanese Concepts: Amae 甘え. Ƶmokes 82: The Burakumin and the Yakuza. READ THE DESCRIPTION. Buraku Rights Parade in Kyoto. The most RACIST people in Japan - 日本で一番差別するのは... Racism in Japan 日本では人種差別がありますか？[字幕付き]