Advertising Agencies Have Forgotten How To Use Plain English To Sell Stuff. How copywriters write copy. Are you a kinky copywriter? I am a man of unfailing habit. 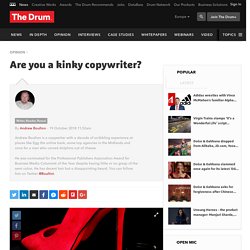 Drop me from the sky into even the most uninhabitable locations and within 45 minutes I will be gobbling cheap charcuterie while I re-watch Con Air. Disagreeable copywriting – why the best writers never play nice. The copywriters I know are nice. 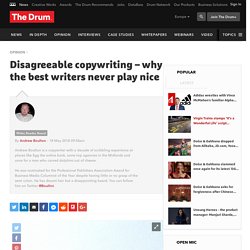 They have soft hands and smell like willow trees and Maltesers. In the event of a hurricane, they would paddle canoes from bungalow to bungalow rescuing old ladies and their clammy cats. But the very best copywriters I know are also entirely disagreeable. It’s a form of disagreeability that doesn’t manifest in the usual ways. 3 things to expect from a career in copywriting. Expect to be wrong. 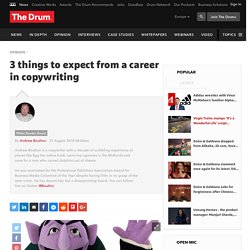 So very wrong. User Data and Cookie Consent. Words. There's not much here. 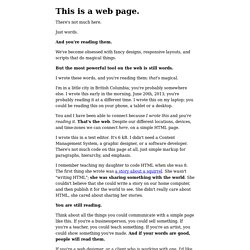 Just words. And you're reading them. We've become obsessed with fancy designs, responsive layouts, and scripts that do magical things. But the most powerful tool on the web is still words. I wrote these words, and you're reading them: that's magical. I'm in a little city in British Columbia; you're probably somewhere else. Guitarplayer. Meet your new cobot: is a machine coming for your job? Next to the M56, on the outskirts of Manchester, the future has landed. 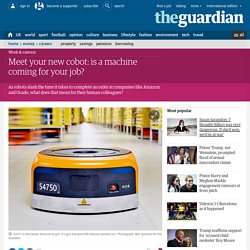 A cluster of huge distribution centres sits at the heart of Airport City, a new development part-funded by the Beijing Construction Engineering Group (two years ago, it was visited by president Xi Jinping of China). Among the biggest buildings is one of Amazon’s self-styled “fulfilment centres”. Living the high life in a Ponte penthouse. Ever since I moved into Ponte City — the iconic 54-storey cylindrical residential skyscraper that soars into the Highveld sky from the edge of Hillbrow in Johannesburg — I’ve struggled to get people to visit me. 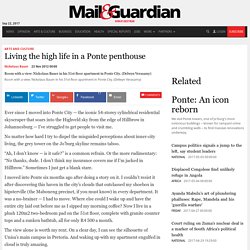 No matter how hard I try to dispel the misguided perceptions about inner-city living, the grey tower on the Jo’burg skyline remains taboo. Cultofmac. Still Don't Get Bitcoin? Here's an Explanation For Five-Year-Olds. Technology, complexity, anxiety, catastrophe. You wake up. 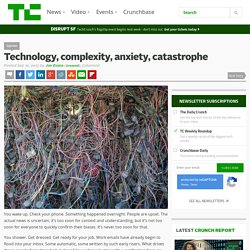 Check your phone. Something happened overnight. People are upset. The actual news is uncertain, it’s too soon for context and understanding, but it’s not too soon for everyone to quickly confirm their biases. Mashable. It's easy to understand on a theoretical level that female founders face more hurdles launching successful startups. 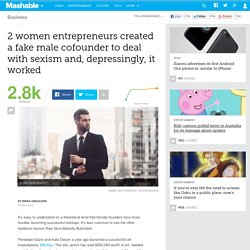 It's less common to see the often insidious sexism they face blatantly illustrated. Penelope Gazin and Kate Dwyer a year ago launched a successful art marketplace, Witchsy. The site, which has sold $200,000 worth of art, needed contributions from developers and designers to get off the ground. Mashable. How ‘Doxxing’ Became a Mainstream Tool in the Culture Wars - The New York Times. “Originally it was little black-hat hacker crews who were at war with each other — they would take docs, like documents, from a competing group and then claim they had ‘dox’ on them,” said Gabriella Coleman, a professor at McGill University who wrote a book about the hacker vigilante group Anonymous. 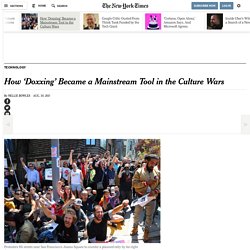 “There was this idea that you were veiled and then uncovered.” Now the online hunt to reveal extremists has raised concerns about unintended consequences, or even collateral damage. A few individuals have been misidentified in recent weeks, including a professor from Arkansas who was wrongly accused of participating in the neo-Nazi march.

MUST READ GUEST ARTICLE: In depth analysis of Mayweather vs McGregor. By Mark Kenny (@kenny8493) The news of a certain boxing license getting approved in Los Angeles has reintroduced the idea of a Super Fight between retired boxing legend Floyd Mayweather and mixed martial arts star Conor McGregor. 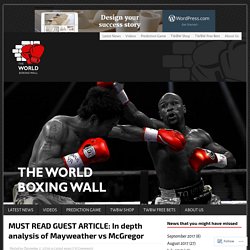 Leonard Ellerbe, CEO of Mayweather promotions, completely dismissed the idea of a fight between the fighters. He labelled it a marketing ploy, designed to get Conor McGregor attention, if that is true good job it worked. The VICE Guide to Slang in 2017 (According to a 20-Year-Old VICE Employee) - VICE. WiGroup – Simply remarkable solutions: An interview with CEO, Bevan Ducasse. We speak to wiGroup CEO Bevan Ducasse about starting a business in 2007 that not only weathered the global crash, but has grown by leaps and bounds.

It is February in Cape Town, and all the usual suspects are in full swing: soaring temperatures, traffic konfyt and raging fires across the peninsula; Capetonians are turning their gaze to winter, longing for the rain, the concomitant replenishment of dams, the drop in temperatures and the easing up of traffic congestion, which is in direct proportion to the number of tourists in the city. Until, of course, when winter does arrive and then the penchant for endless sunny days returns. Writer, Producer, Futurist​ Apple AR Is Already Blowing Up. Forty years of the internet: how the world changed for ever. Towards the end of the summer of 1969 – a few weeks after the moon landings, a few days after Woodstock, and a month before the first broadcast of Monty Python's Flying Circus – a large grey metal box was delivered to the office of Leonard Kleinrock, a professor at the University of California in Los Angeles.

Here Is When Each Generation Begins and Ends, According to Facts - The Atlantic. This article is from the archive of our partner We can all agree that Millennials are the worst. But what is a Millennial? A fight between The New York Times and Slate inspired us to try and figure that out. After the Times ran a column giving employers tips on how to deal with Millennials (for example, they need regular naps) (I didn't read the article; that's from my experience), Slate's Amanda Hess pointed out that the examples the Times used to demonstrate their points weren't actually Millennials. FITCH. 1. I Paid to Find Out Everything a Data Broker Knows About Me - The Atlantic. On a recent Thursday, I waited for an email that was supposed to contain every personal detail the internet knows about me. The first space-based 'nation', Asgardia, plans to illegally store data off-planet - ScienceAlert. Late last year, an international group of scientists announced that they were going ahead with plans to launch the first ever private space-based nation, Asgardia.

It sounded kinda nuts then, and it still seems nuts now, but according to a new FCC filing, plans are going full-steam ahead, as the brains behind Asgardia are looking to launch a data storage satellite that will orbit far beyond the reach of Earth-based laws and regulations. "If Asgardia can find a launching country that is not a signatory to the space treaties, there are no international law obligations," Mark Sundahl, a professor of space law at Cleveland-Marshall College of Law, told Motherboard. Machine learning, bots and AI - The real reasons behind Microsoft's ac. 5 Marketing Tips We Can Learn from Dr Seuss. Not So Lonely Planet. How To Spend It. The mad, bad crusade against ‘cultural appropriation’ It’s usually best to ignore the indignant fury of the 21st-century young. Writing worth reading. 11 "Don't-Tell-the-Wife" Secrets All Men Keep.

Secret #7: Every year we love you more continued...