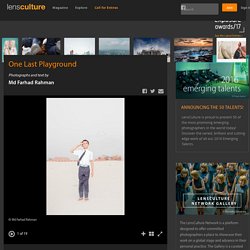 I found them playing in an empty expanse of land. Once filled with water, construction workers had covered the area with sand so that new land could be created where none existed before. As Dhaka—the capital of Bangladesh—continues to grow and develop, it has gradually expanded outward in the manner of urban cities everywhere. Filling in the bodies of water that surround the city is seen as a quick means to meet the demands of a growing population and their increasing need for space. These photographs do not serve as answers, but rather as points of interrogation: they raise deeper questions on the nature of play, childhood, and their intersecting relationship with space. This is the story of a fantasy world imagined by a group of children. —Md Farhad Rahman. Pippa Samaya - The knowledge between us.

Anatomy of False Memories - Photographs by Vanja Bucan. Try to remember a positive or negative moment from your childhood. 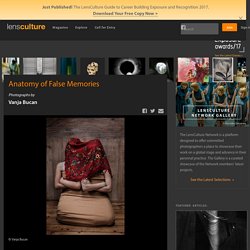 Think of how many variations of the same story you have told to different people over the years. And recall how much you have forgotten. False memories, when explained in medical terms, are a result of a troubled past. In those cases, a false memory is the reenactment of a trauma...But in my work the false memory is a sort of unspoken memory. It doesn't matter whether it is "real" but rather that it could have happened or appeared in the last seconds of our strange dreams... Vanja Bucan's work is idiosyncratic, unusual—and deeply memorable. The River (Ongoing) — Sian Davey. Impressive Portraits of Mexico Dancers. Body painting « Sweet Land of Liberty » par l’artiste Trina Merry. 10 faceless portraits of women. “Leaning” (Patty Carroll/Anonymous Women) “Accessories” (Patty Carroll/Anonymous Women) 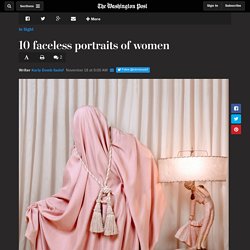 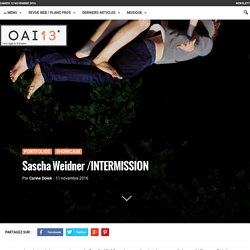 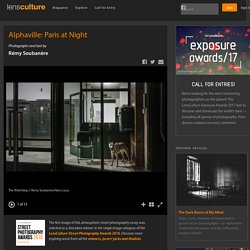 Discover more inspiring work from all the winners, jurors' picks and finalists. In this series, nothing is staged—but the sun never comes up. The series came to me from a strange undercurrent in the air in Paris: there is a pervasive feeling that everything here is controlled, watched and somehow less alive. Sometimes it feels like reality progressed far beyond the future predicted in old dystopian movies. 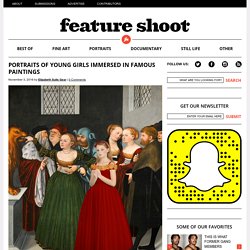 McCaw, who currently divides her time between Manhattan and the Big Island of Hawaii, started out as a street photographer, though with time her work has evolved into something which better reflects her lifelong passion for art history. In her latest series Imagine That we see young girls standing inside well-known paintings dressed in costumes inspired by period clothing — they are neither here nor there, seemingly engaging with the paintings and yet largely devoid of painterly qualities. These great paintings are reenvisioned through the eyes of youth in the modern day. The artist elaborates: “their innocence is as metaphor for beauty, aesthetics, and humanism”. 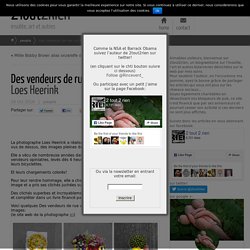 In the words of her friend Arvida Byström, London photographer Valerie Phillips always shoots “with the nerve of a photographer who just got their first camera.” 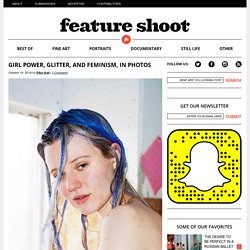 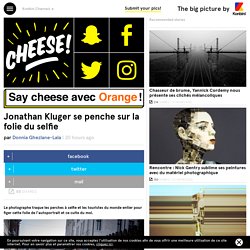 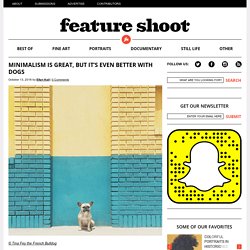 They don’t ask much; all a dog needs to be content is food, shelter, and a loving home. Minimal Pup, an Instagram account devoted to cleanly composed canine portraits, is a celebration of the kind of zest and appreciation a dog has for the simplest of things. Olympe Tits - MISE EN SCENE - FEMME. Frauke thielking -AERIEN. VB-Intro. Brandy Trigueros- IDENTITE - SOUVENIR - SILHOUETTE - MÈRE.

Created during trips to Los Angeles, New Mexico, and Spain, the series is a set of dream-like, pastel shots of anonymous females among both natural and urban sets. June Kim and Michelle Cho, the duo behind the project, wanted to find their own way of remembering the places they visited, both emotionally and creatively. While their works have predominantly based in the photographic tradition so far, the two plan to expand their activities to other mediums as well, including film.

Speaking about their practice, they say: “We’re constantly compelled to create, inspired by everything from literature to films, and always informed by our experiences.” Autorretrato sensorial - edu monteiro. KEVIN HORAN - ANIMAL. FOOD. Heaven © Andreas Joshua Carver (@theaphrodisiackitchen) Watermelon rinds © Aliza Eliazarov (@aliza_eliazarov) Whether we’re talking about Dutch still life painting or fast food advertisements, art and imagery has always been intimately connected to what we eat.

For our latest group, show we invited you to submit photographs that show the wonderful and strange relationship between food and art. Anna & Eve -Viktoria Sorochinski. Anna & Eve is an ongoing narrative project that I started to work on in 2005. This project (as well as most of my work) dwells between fantasy and documentary. Even though all the scenes are staged, they reveal a real relationship of a mother and her daughter.

Anna and Eve were particularly interesting to me when I first met them in 2005 because the boundary between the child and the adult woman was blurred to an unusually high degree. This was primarily due to the mother's young age (23); it seemed at times that she was more of a child than her 3 year-old daughter. It was often hard to tell who held the power and control between the two, and who was learning the essence of being a human in this world. Jeweled - Photographs and text by Justine Tjallinks. Helge Skodvin - Magnum. David Alan Harvey has photographed more than 40 articles for National Geographic, beginning with a story about Tangier Island, Virginia, in the November 1973 issue of the magazine. In 1978, Harvey was named Magazine Photographer of the Year by the National Press Photographers Association (NPPA).

His work has been exhibited at the Corcoran Gallery of Art, the Nikon Gallery, the Museum of Modern Art in New York, and the Virginia Museum of Fine Arts. His photographs have appeared in Life, The New York Times, and Sports Illustrated. He is well known for his work on Spanish cultural migration into the Americas and has produced significant bodies of work in Mexico, Cuba and Brazil. He has published five books, Cuba, Divided Soul, Jeju Haenyeo, Based on a True Story and a republication of his seminal 1967 project, Tell It Like It Is. Harvey is the founder and editor of the award-winning Burn magazine, featuring iconic and emerging photographers in print and online. North Korea - Fabian Muir. David Alan Harvey has photographed more than 40 articles for National Geographic, beginning with a story about Tangier Island, Virginia, in the November 1973 issue of the magazine. In 1978, Harvey was named Magazine Photographer of the Year by the National Press Photographers Association (NPPA).

His work has been exhibited at the Corcoran Gallery of Art, the Nikon Gallery, the Museum of Modern Art in New York, and the Virginia Museum of Fine Arts. His photographs have appeared in Life, The New York Times, and Sports Illustrated. He is well known for his work on Spanish cultural migration into the Americas and has produced significant bodies of work in Mexico, Cuba and Brazil.

He has published five books, Cuba, Divided Soul, Jeju Haenyeo, Based on a True Story and a republication of his seminal 1967 project, Tell It Like It Is. Harvey is the founder and editor of the award-winning Burn magazine, featuring iconic and emerging photographers in print and online. Filles - perles - Maisie Broadhead.

Shaun Downey. ARTWORKS. Life from a Tube: The London Underground - Video interview with Bob Mazzer. Every day I travelled to King's Cross and back. Coming home late at night, it was like a party and I felt like the tube was mine and I was there to take the pictures. —Bob Mazzer See more of FullBleed's feature films on their thriving Youtube channel. Also keep your eyes out in the coming weeks for more films from their archive. Walker Evans famously photographed New York’s underground commuters between 1938 and 1941 using a cleverly constructed camera that concealed his photographic intent. London is a world city that mixes people from all corners of the globe. Indeed, Mazzer's most engaging images go beyond the surface and capture moments that are peculiar to underground train travel. Besides the serious, Mazzer’s camera-ready aptitude also brings us moments of mirth and sociability: friends on a night out, a guitar player in a commanding position atop an escalator, a man on a ladder with his head effaced by the face of a clock he is fixing.

—Sean Sheehan. Crossing Europe - Poike Stomps. Poike Stomps is one of the 31 winners and finalists of the LensCulture Street Photography Awards 2015! LensCulture is proud to present the work of these photographers who show us, each in their own way, why street photography today remains as fresh and vibrant as ever! Living around the corner from the Muntplein in Amsterdam meant I used to pass it several times a day. It would often cheer me up just to see the life going on in those few square metres. I like watching crowds. I started studying people crossing at the intersection, observing their interactions and the way they moved. Fine Art - Daily Routines. © Andi Schreiber Andi Schreiber: I crave routine in terms of my art making but it’s impossible to achieve.

I’m a full-time parent so I try to get my work done when my kids are out of the house or at school. While it would seem that the hours are endless, the days go by fast, usually emptied by various household responsibilities. My fine art routine has adjusted to fit into these other obligations, like by taking my camera along to my children’s dental checkups or having it on hand when I’m spending an afternoon on the sidelines. I’m also good about uploading to my computer regularly, selecting my images in Photo Mechanic and then processing in Lightroom.

Retro Qwerty Keyboard for Tablets and Computers. Hilarious Photos of Superheroes and Villains Engaged in Life's Most Mundane Activities. Mike Dempsey. Martin Roemers - Metropolis - ville-lumiere- foule. AARON HUEY IS A PHOTOGRAPHER. Compassionate Portraits Capture the Dignity and Grace of Farm Animals. The 2015 Emerging Photography Awards: A Sneak-Peek at Some of Our Favorite Submissions. Freight Train Hopping. Photographer Captures Individuals at Their Most Vulnerable: Just After Waking Up.