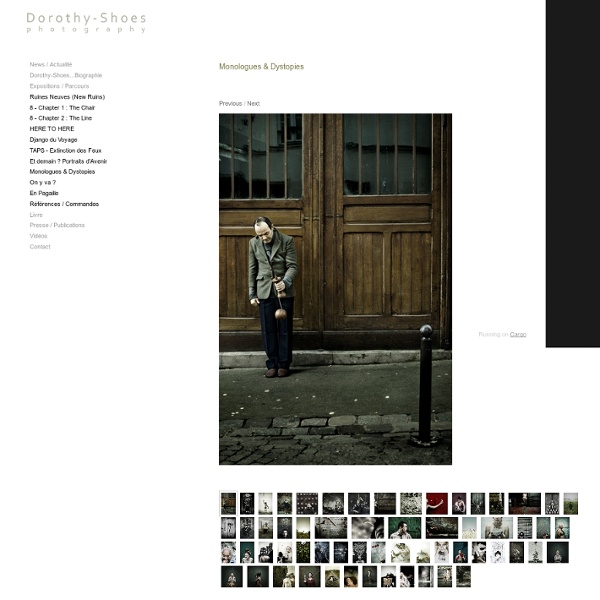 Andrew Lyman photography Andrew Lyman is an artist living, working, and attending school in Savannah, US for the time being. Lyman is driven to create and learn from his daily experiences and his immense group of inspired friends. We unveil his Fleeted Happenings project below, as the most outstanding from his portfolio

Ljubisa Danilovic Ken Hermann - Flower Man Flowers are a hugely important part of Indian culture, used in everything from temple rituals to festivals and parties – and Malik Ghat flower market is the largest of its kind in India. Located in Calcutta, next to the Hooghly river, it attracts more than 2,000 sellers each day, who flock to peddle their blooms amid frantic scenes. Commercial photographer Ken Hermann first visited Calcutta three years ago, when he was shooting coal miners, one of the three or four personal projects he tries to complete every year. On that trip, the Dane, now 35, visited the flower market, and ever since held on to the idea of returning to take portraits of the sellers, their magnificent garlands often appearing in stark contrast to their own dusty and sweat-soaked attire. He returned two months ago, accompanied by a local interpreter, and approached various traders with a view to taking their picture. I paid some of them; others were happy to do it in exchange for prints; Bloom with a view

Gregg Segal - 7 Days of Garbage Rotator powered by <strong>EasyRotator for WordPress</strong>, a free and easy jQuery slider builder from DWUser.com. Please enable JavaScript to view. All Images © Gregg Segal Artist’s Statement: “7 Days of Garbage is a series of portraits of friends, neighbors, and other acquaintances with the garbage they accumulate in the course of a week. – Gregg Segal Artist’s Bio: Altadena, CA Gregg Segal studied photography and film at California Institute of the Arts. www.greggsegal.com

Julien Gremaud - double exposition Julien Gremaud 'Once blown up to large-scale photographic prints, these double images become haunting monuments to a paradoxical world where the very notion of an objective media comes into question. Gremaud purposefully presents double images that create a contradiction from within: an idyllic holiday scene mixed together with a destroyed cityscape, or an image of mourners overlooking a mass grave juxtaposed with a photograph of a hectic media scrum.' From Representing the Death of Neoliberalism, an essay on Julien by Marco Bohr. About the artist Julien Gremaud (b. 1984, Switzerland) lives in Jongny/Vevey and works in Lausanne. Have a look at the preview of the Foam Magazine Talent Issue 2014

Cosmic Surgery - haser.org Cosmic Surgery Since leaving University in 2010, Alma has been working on self-portraits, being her own willing and available model. More recently she has started taking portraits of other people and is interested in making work that has a disquieting or disconcerting resonance. Alma has always made things with her hands and now tries to find ways to combine her fine art background with photography. The series has three distinct stages. Origami is very meditative, you can get lost in the world of folding for hours. There is something quite alien about the manipulated faces, as if they belong to some futuristic next generation. With the simple act of folding an image Alma can transform each face and make a sort of flattened sculpture.

Animated Cinemagraphs of City Life and Nature Strasbourg-based photographer Julien Douvier utlilizes a variety of techniques to create these beautifully meditative cinemagraphs of urban life and nature. He films and edits every image with an obsessive attention to detail, a fact not lost on several fashion clients that have commissioned Douvier to bring their brands to life recently. via colossal Top 10 Analogue Photographers Analogue photography always had and still has a certain fascination as you still need to have some general knowledge about the act of taking pictures and the results are kind of unpredictable. Thus we love and admire photographers who are using film, transforming it into beautiful images. The following list of our ‘Top 10 Analogue Photographers’ is actually comprised of regulars on iGNANT, who are certainly amongst our favourite photographers. We focused on ten photographers that are all depicting a similar topic, succeeding in capturing the beauty of women. Though if you click on their names, you’ll be able to discover much more of their talent. Lukasz Wierzbowski Definitely not to be missed in this list is Lukasz Wierzbowski aka Neon Tambourine, a Polish photographer who proved more than once to have a fantastic eye for mood and composition. Cristóbal Escanilla Cristóbal Escanilla is a professional photographer and videographer from Santiago de Chile. Giulia Bersani Christina Paik Li Hui