Coming of Age as a Girl in Gaza, in Photos. Yara and her brother waiting for their father to return with schwarma as an evening treat after a recent conflict ended. 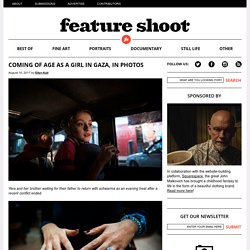 Jaques pursued the Gaza Girls because she recognized herself in them, and she identified with them more over time. “Gaza is an incredibly difficult place to live,” Jaques writes. Due to restricted space and cultural norms, Jaques says privacy isn’t something these girls have, even at the time in their lives when perhaps they need it most. Doaa in a friend’s bedroom. Reine Paradis - SERIES. Photographer, Director. Chien - CONCEPT - HUMOUR. Le jour de ses 30 ans, l’épouse de Rafael Mantesso l’abandonna. 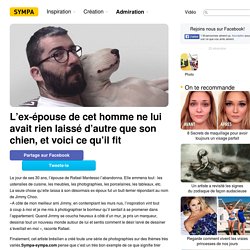 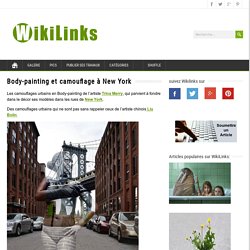 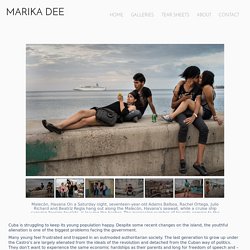 Despite some recent changes on the island, the youthful alienation is one of the biggest problems facing the government. Many young feel frustrated and trapped in an outmoded authoritarian society. The last generation to grow up under the Castro’s are largely alienated from the ideals of the revolution and detached from the Cuban way of politics. They don’t want to experience the same economic hardships as their parents and long for freedom of speech and – maybe even more- economic opportunities. Some youngsters might have a wary sense of possibility these days, but most still don’t see a future for themselves in Cuba and dream of leaving the island.

Gérard RANCINAN. Carrie Boretz,-Streets of NYC. A couple on the subway, 1980. 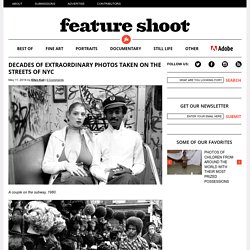 Wig stand, Orchard Street, 1975. For photographer and photo editor Carrie Boretz, New York City has always been brimming with the “kissing, sleeping, daydreaming” of strangers. Giuseppe Pepe – iGNANT.de. First Love. ETHAN JAMES GREEN Young New Yorkers. CASEY MESHBESHER Women of street photography. The idea here is to have a jumping off point to some of the great work out there by women in the street genre, addressing extremely low representation in visible, published street work online, in exhibitions, and in print. 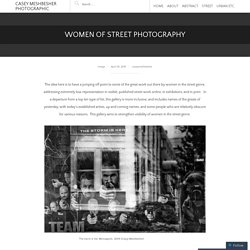 In a departure from a top ten type of list, this gallery is more inclusive, and includes names of the greats of yesterday, with today’s established artists, up and coming names, and some people who are relatively obscure for various reasons. This gallery aims to strengthen visibility of women in the street genre. The storm is her, Minneapolis, 2009 (Casey Meshbesher) Two years ago I started compiling links when I couldn’t find any discussion of female street photographers on the web, and found the typical percentage of some 4% of material frustrating. Curating online street blogs, I wanted to increase this ratio in these sites, with a goal of 1/3 female, but it is a struggle to maintain even 1/5 at times, so thus the idea for this list. Michelle Groskopf - TEENS. SYDNEY SIE - Surreal and Sweet Photography. ALEX PRAGER - Between Fiction and Reality. Atsushi Ezura- portrait - personnalité. 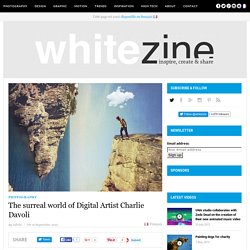 The final composition takes you on a dream wave into the artist’s mind. Davoli is a technical genius, the real weight of work is dropped after the photograph is taken, leaving a very thin line between fiction and reality. Catch the rest of his work here Français Comments comments. Nick Hannes - The Mediterranean and the Continuity of Man. In partnership with Photomed Festival, LensCulture is pleased to present a series of preview articles highlighting various parts of the upcoming festival’s program. 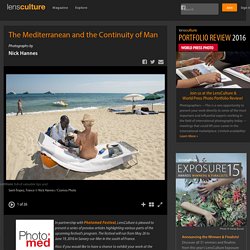 The festival will run from May 26 to June 19, 2016 in Sanary-sur-Mer in the south of France. Also: if you would like to have a chance to exhibit your work at the festival (as well as in Beirut, Lebanon), learn more about their "Mediterranean Spirit" call for entries. Since we first published this series on LensCulture a few years ago, it has continually proved to be one of our most popular articles.

Something about the series’ distinctive mix of deadpan humor and political, environmental savvy has made it stand out, again and again, for many, many thousands of readers. But what was on the photographer’s mind as he produced this body work, over the course of four years and 20 separate trips all around the Mediterranean? LC: What first drew you towards the subject of the Mediterranean? Still, I was guided by some big topics. Olivia Locher. Lens Between Us. Jennifer Loeber - Pleasures of the Uninvited. Through the Lens of Desire - Photographs and text by Kris Sanford.

An unconventional series exploring the theme of (queer) desire by projecting new interpretations on snapshots of the past. 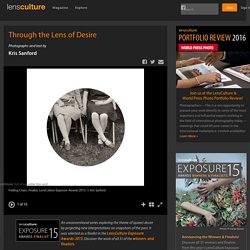 It was selected as a finalist in the LensCulture Exposure Awards 2015. Discover the work of all 31 of the winners and finalists. Relationships, real or imagined, are at the center of this work. Growing up queer, I searched for a history that spoke to me, that included me. In my family history, there were no couples that mirrored my own intimate relationships.

"Through the Lens of Desire" creates implied narratives using snapshots from the 1920s-1950s. Vernacular photographs from that era were created as private keepsakes. By purposefully selecting images that picture men together and women together, I am creating an imaginary queer past. OLIVIA BEE - Teenage Girl. Bad Day, 2013. 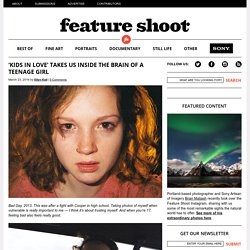 This was after a fight with Cooper in high school. Taking photos of myself when vulnerable is really important to me — I think it’s about trusting myself. And when you’re 17, feeling bad also feels really good. Max Jumped Off a Train, 2012. My little brother Max was super crazy when he was younger. Malte Jaeger. GABRIELLE CORNI - Under Water Portraits. My name is Gabriele Corni, my photographic idea was created and promoted by GALLLERIAPIÙ and it’s APNEA Humans Breathless cross-media project. An archive of one hundred water portraits exhibited in an “imaginary venue” where the space created by Claudio Silvestrin interacts with water, shaping an innovative work accessible thanks to the technological realization of Vitruvio Virtual Reality.

Through an analogy between the immersions in water and those in daily life, the project investigates the shortness of breath in today’s society, with the intention to document the emotional variety of humans in distress. Each portrayed subject writes anonymously his/her desire, which in the poetic of the work stands for the breath, his/her personal motivation to dive daily into reality. International partnerships with galleries and cultural associations make this photographic project itinerant. More info: Facebook | Instagram Edoardo – breath #4165 Vania – breath #2655 Marta – breath #2842. Dogs portraits. My name is Elke Vogelsang aka Wieselblitz, I’m a people and pet photographer working and living in Germany. I’m absolutely crazy about dogs. Thankfully, I am able to combine this craziness with my other passion, photography. With my dog portraits I try to explore the different expressions and characters of dogs. It’s all about emotions and personality.

I love the challenge to get funny, silly or sometimes even melancholic expressions. But in these cases, when they are in my studio, they were just waiting for the next treat or listening to a crazy sound I made. Here is my not so serious but hopefully amusing picture series “Dogs questioning the photographer’s sanity“. Top chefs fridge. Markus Henttonen - PLAGES - VUE AERIENNES -NUIT - ILLUMINATION - Jean-Francois Rauzier- VILLE - EMPILATIONS - Catherine Balet - Photographer - Strangers. Adrienne Salinger- Poignant Photos of 1990s Teenagers in Their Bedrooms. Gavin Fred H “I’m not a nostalgic person,” says Albuquerque-based photographer Adrienne Salinger, “I’m not wired that way.” She keeps a single copy of her book In My Room: Teenagers in Their Bedrooms, filled with images she made in the 1990s, but she doesn’t feel sentimental about it, even if the rest of the world does.

The portraits were intended as a revolt against media portrayal of adolescence, the films, television, and magazines that imposed (often adult) ideals onto young people. The thing about a teenager’s bedroom, she explains, is that it defies classification. In order to honor the ambiguities and shifts in her subjects’ sense of self, she includes with her images passages from extensive hours-long interviews, recorded and transcribed from video tape. “Every single person deserves time to tell their story,” she explains. Salinger, like her pictures, is frank and disarming. Dawn M Joe H. Aline Smithson: Self & Others. Aline Smithson Founder and Editor, Lenscratch After a career as a New York Fashion Editor and working along side the greats of fashion photography, Aline Smithson discovered the family Rolleiflex and never looked back.

On the Lineage of Portraiture: From August Sanders til Today - Text and selections by Sebastian Hau. And thus, in portrait photography, it’s as if my eye and my mind could find nothing to hold on to. But finally, a surprising sentence by August Sander showed the door: he said that photography was made to be "turned over," as in a magazine. This odd little phrase greatly helped me appreciate his work, first of all. Portraits of Adolescence - Hellen van Meene. Dutch artist Hellen van Meene is widely known for her distinctive style of photographic portraiture and her exceptional use of light.

In her timeless photographs, young women and men are depicted as if they were under some sort of spell, stuck between their vulnerability and discomfort, as well as a latent sense of solemn grace. When we look at her work, wordlessly, we are plunged into the lives of these strange yet delicate characters, captivated by their silent stories. What is the hidden secret behind the subjects' postures and facial expressions? George Popescu - Mauritanian Desert Train. One is free to travel on top of the iron ore train that crosses the Sahara desert from the mine at Zouérat, in northern Mauritania, to Nouadhibou harbor, on the Atlantic coast of West Africa, as seen on 1st of September 2015.

Passengers without tickets ride open-top in the train wagons. All images © George Popescu. Aaron Tilley - Anxious anticipation. Adrenaline, explains writer Jordan Kushins in Issue 19 of Kinfolk Magazine, settles in not while we find ourselves in the midst of crisis but the moment beforehand; it’s the anticipation, not the actual event that gives us a chemical high. Tomasz Liboska - Polish Re-Enactors. Krzysztof with daughter, Wehrmacht soliders Marek, Native American On the outside, these Polish houses look unremarkable, but step inside, and you’ll find a Roman legionary from the First Century C.E., a samurai from medieval Japan, and a soldier from the armed forces of Nazi Germany.

At least that’s what photographers Tomasz Liboska and Michal Jedrzejowski discovered when the embarked on a journey through space and time as resurrected by the country’s many re-enactors and hobbyists. The photographers held no interest in capturing the stereotypical shots of historical role play enthusiasts at fairs and festivals. Poetic Landscapes Marry the Earth and the Female Body. The White Sands of New Mexico stretch for hundreds of miles in either direction. Behnaz Babazadeh -Self-Portraits -Burqas Made of Candy. Gummy Bears Fruit by the Foot Years ago, a young lady named Behnaz Babazadeh showed up to her school in the United States wearing a burqa.

Géraldine Lay. Portraiture: the Paradoxes and Politics of Looking - Essay by Rebecca Horne. Paradoxes lie at the heart of great photographic portraits. We know a photograph can’t actually "capture" anything essential about people in the photographs. More often what we are seeing is powerfully influenced by context, our own biases and preferences and those of the photographer.

Intellectually, we are aware that we can’t know a person from simply looking at them, much less from a mute photograph. Anthony Thornton - Alone Together. Good Things Come Together - Photographs and text by Jordi Pizarro. This great portrait photography series was selected as a finalist in the LensCulture Exposure Awards 2015. Discover more inspiring work from all 31 of the winners and finalists.

In Kodinhi, a small town in southern India, good things come in twos. Confounding both doctors and several scientific studies, this small town in Kerala has the highest rate of twin births in the world. Each year, a veneration ceremony is held in the small Christian church, where hundreds of identical twins congregate in celebration of their "double identity" at the feet of St. Gervasis and St.