The bystander effect (also known as bystander apathy) is a psychological theory that in the presence of others, people are less likely to offer help when they witness someone in trouble.

Some of the causes of the bystander effect includes pluralistic ignorance, diffusion of responsibility and inconvenience.

When a situation arises, there is a tendency to look to others to determine if that situation need intervention of if someone really needs help. When there are many others around, individuals tend to think that help is not needed since no one else is concerned. In some cases of high ambiguity, it can take a person or group up to five times as long before taking action than in cases of low ambiguity.

When there are others are around, our sense of responsibility lessens. Therefore with each person added in a group, individuals are less inclined to take action. Many would think that someone else already called for help, or label it as "someone else's problem".

Some might not want to get involved solely for the fact that it is inconvenient. Some worry about the consequences of getting involved. Especially in the Singaporean context where everyone is being taught, "Don't be a busybody". For example, some do not want to go through the troubles of going to the police station to record a statement and subsequently going to court as a witness for helping to save someone from robbery.

One example of the bystander effect includes the gang rape in Richmond High School, where nearly 2 dozen people stood by and watch the violence unfold on a 15 year-old girl outside her high school. Another example is the death of Raymond Zack, who attempted suicide at the Robert W. Crown Memorial State Beach in San Francisco. The suicide took 1 hour as neither the police nor the firemen went into the waters to help.

There are some habits that we can cultivate so that we know what to do especially during an emergency. When in doubt, we should always err on the side of emergency. For example, when a man starts coughing violently and is clutching his neck, we should go up to him and ask him if he is alright or if he is choking and needs help. It does not matter if we read the situation wrongly and get laughed at, as it speaks volume about the other person's character for laughing at someone who is willing to extend a helping hand. Another habit is to be aware for the local authorities' emergency numbers. Lastly, we should get trained in relevant skills such as first aid and CPR so that we have the knowledge to help. 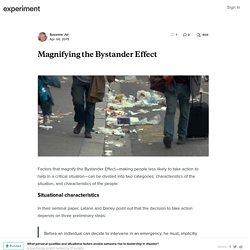 Situational characteristics In their seminal paper, Latané and Darley point out that the decision to take action depends on three preliminary steps: Before an individual can decide to intervene in an emergency, he must, implicitly or explicitly, take several preliminary steps. If he is to intervene, he must first notice the event, he must then interpret it as an emergency, and he must decide that it is his personal responsibility to act. [4] Characteristics of the situation may influence individual decisions at each of these three steps. Are We Victims Of "Bystander Effect"? The Bystander Effect vs. The Good Samaritan Effect.

Death of Raymond Zack. How to Overcome the Bystander Effect. Psychologists have long been interested in exactly why and when we help other people.

Imagine that you are walking into a large department store. Being Observant Being Skilled and Knowledgeable Guilt Feeling Good. How to Break the Bystander Effect. They could have left it to someone else. An Army veteran blocked a shooter in Oregon from entering his classroom. Three friends on a high-speed train from Paris to Amsterdam helped stop a gunman wielding an AK-47. This past spring, an Army captain in North Carolina pulled a couple to safety after a fiery car crash.

Were these men instinctively courageous, or had they learned to be? The Army captain (aptly wearing a Captain America T-shirt) credited his military training for knowing what to do and remaining calm. These heroes are dramatic examples. And this conundrum is not limited to thwarting terrorism or physically saving someone. But we often look the other way, like the priest and Levite in the Good Samaritan parable. The Bystander Effect - You Can Break the Cycle. BYSTANDER INTERVENTION. Reducing the Bystander Effect. As discussed, there are a number of factors that magnify the Bystander Effect.

Fortunately, there are also a number of factors that weaken it. Once again, factors can be divided into characteristics of the situation, and of the people. Situational characteristics.