How to Overcome the Bystander Effect 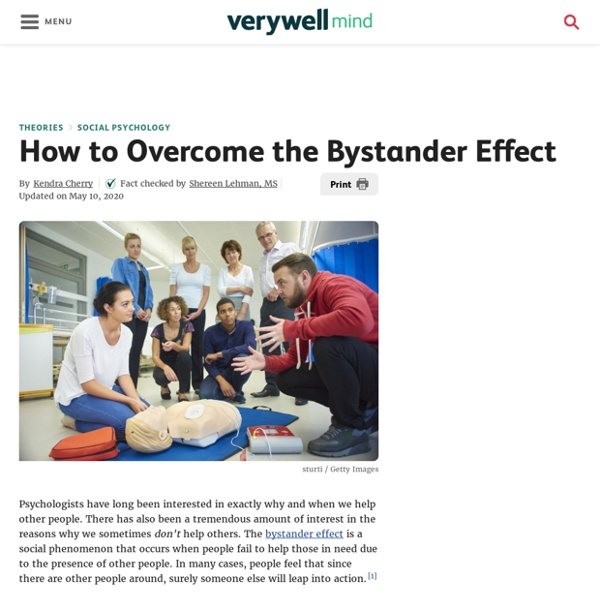 Psychologists have long been interested in exactly why and when we help other people. There has also been a tremendous amount of interest in the reasons why we sometimes don't help others. The bystander effect is a social phenomenon that occurs when people fail to help those in need due to the presence of other people. In many cases, people feel that since there are other people around, surely someone else will leap into action.1 While the bystander effect can have a negative impact on prosocial behavior, altruism and heroism, researchers have identified a number of different factors that can help people overcome this tendency and increase the likelihood that they will engage in helping behaviors.2 Some of these include: Witnessing Helping Behavior Sometimes just seeing other people doing something kind or helpful makes us more willing to help others. Imagine that you are walking into a large department store. Being Observant Being Skilled and Knowledgeable Guilt Feeling Good

A New Look at the Killing of Kitty Genovese: The Science of False Confessions On March 13, 1964 a woman named Catherine “Kitty” Genovese was murdered outside of her apartment in Queens, New York. Over the course of a brutal attack lasting over 30 minutes, Genovese was stabbed at least 14 times. It was widely reported that despite Genovese’s screams for help, not a single one of the 38 bystanders at the apartment that night came to her aid. The case caught the attention of the public, as well as psychological scientists, leading to research on the “bystander effect.” But recent research raises the question: What if we’ve had the story all wrong for the last 50 years? After painstakingly reviewing historical records on the case, APS Fellow Saul Kassin (John Jay College of Criminal Justice) discovered that many important facts related to the case have been overlooked for decades.

Bystander Intervention Darley and Latane, the forefathers of bystander intervention, identified five stages that people move through when taking action in a problematic situation. These stages may not be linear.1 STAGE ONENotice potentially problematic situations. While some situations are easily noticeable, many other situations are better characterized as problematic or high-risk behaviors that are likely to escalate to dangerous situations, including: offensive comments atypical or withdrawn behavior controlling behavior in a relationship high-risk drinking (e.g., taking shots, playing drinking games). Sometimes, a person’s gut instinct or intuition can be the best cue that a problem exists.

The guide to being a better bystander But the desire to help people from marginalized groups who face harassment or threat isn't enough. We have to act. Just recently, on a New York subway, a young Muslim woman was reportedly subjected to verbal and physical harassment by three men; according to police, the woman said these men grabbed at her and called her a "terrorist" who should "get out of this country." Later, on Facebook, she lamented that "so many individuals chose to be bystanders," rather than intervening or trying to help her.

Understanding the Bystander Effect If you witnessed an emergency happening right before your eyes, you would certainly take some sort of action to help the person in trouble, right? While we might all like to believe that this is true, psychologists suggest that whether or not you intervene might depend upon the number of other witnesses present. What Is the Bystander Effect? The term bystander effect refers to the phenomenon in which the greater the number of people present, the less likely people are to help a person in distress. When an emergency situation occurs, observers are more likely to take action if there are few or no other witnesses.

Pluralistic Ignorance (SOCIAL PSYCHOLOGY) - iResearchNet Pluralistic Ignorance Definition Pluralistic ignorance occurs when people erroneously infer that they feel differently from their peers, even though they are behaving similarly. As one example, imagine the following scenario: You are sitting in a large lecture hall listening to an especially complicated lecture. After many minutes of incomprehensible material, the lecturer pauses and asks if there are any questions. No hands go up.

Man slashed & robbed at Tanglin Halt claims witnesses "did nothing to help" - Mothership.SG - News from Singapore, Asia and around the world A 58-year-old man was recently arrested for his suspected involvement in a case of armed robbery. On Oct. 13, the suspect slashed another man with a fruit knife near Tanglin Halt Road, and managed to get away with the victim's mobile phone as well. The suspect was arrested on the same day and was subsequently charged in court two days after the incident. However, a Facebook post which surfaced recently revealed more details of what had happened that evening. One Kyle Huang Junyuan shared that he was with a group of friends at Tanglin Halt Market on the evening of Oct. 13.

The 21st century bystander effect happens every day online If you’re going to fall, injure yourself and need help, where is a good place to do it? Should you choose a busy thoroughfare or a deserted backstreet? Statistics and experiments in social psychology will tell you that if you need help, you should avoid dropping in a busy street, even if hundreds of people are passing through.

The Three D’s of D.O.T Intervention: Direct, Distract, and Delegate You may be wondering about how you can intervene if you see an incidence of violence happening or a situation has the potential for violence? You may have concerns for your own safety and welfare or perhaps being confrontational is not part of who you are. Part of the Green Dot philosophy is teaching bystanders how to intervene in a manner that is comfortable for them.Direct: A direct intervention is exactly as it says; a bystander confronts a situation him or herself. For example, you may witness a situation developing with a friend and another person that looks like it may escalate so you step in and pull your friend out of the situation and walk him/her away.

You will feel guilt if something happened to someone if you did not offer your help. A lot of time, donation campaign use this guilt feeling to push people to donate. by priciliachan Sep 20

Factors that can help overcome the bystander effect. 1. Witnessing helping behaviour in others - feeling inspired by other kind acts 2. Being observant - staying alert to your surroundings 3. Being skilled and knowledgeable - take first aid classes or BCLS 4. Guilt - Survivor's guilt 5. Having Personal relationship - make eye contact and engage in small talks 6. Seeing others as deserving of help - see the good in others 7. Feeling good - happiness and success can lead to helping others by vrncchin Sep 20

This article teaches us ways to overcome the Bystander Effect, here are some of the few examples listed: 1. Be influenced by others’ helping behaviour 2. Be observant of our surroundings 3. Take up some medical/self defence skills, etc 4. Think about the guilt if we do not help by yqichan001 Sep 19

You will definitely be full of guilt if something had happened to someone and you did not offer your help. by philip06 Mar 26