Introduction to the Bystander Effect and ways you can counteract it

Research has shown that, even in an emergency, a bystander is less likely to extend help when he or she is in the real or imagined presence of others than when he or she is alone. Moreover, the number of others is important, such that more bystanders leads to less assistance, although the impact of each additional bystander has a diminishing impact on helping. What Is the Bystander Effect? If you witnessed an emergency happening right before your eyes, you would certainly take some sort of action to help the person in trouble, right?

While we might all like to believe that this is true, psychologists suggest that whether or not you intervene might depend upon the number of other witnesses present. What Is the Bystander Effect? The term bystander effect refers to the phenomenon in which the greater the number of people present, the less likely people are to help a person in distress. When an emergency situation occurs, observers are more likely to take action if there are few or no other witnesses. Being part of a large crowd makes it so no single person has to take responsibility for an action (or inaction). Untitled. Untitled. Are We Victims Of "Bystander Effect"? THE BYSTANDER EFFECT. The Science of Empathy.

Everyday Sociology Blog: The Bystander Effect: A Case Study. By Karen Sternheimer You might have seen video of bystanders rushing to lift a burning car off of a motorcyclist who was trapped underneath. 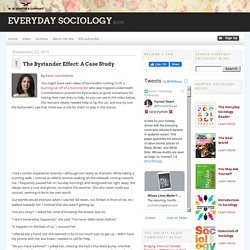 Commentators praised the bystanders as good Samaritans for risking their own lives to help. As you can see in the video below, the rescuers clearly needed help to tip the car, and one by one the bystanders saw that there was a role for them to play in the rescue. I had a similar experience recently—although not nearly as dramatic. While taking a morning walk, I noticed an elderly woman walking on the sidewalk coming towards me.

Our worlds would intersect when I saw her fall down, not 50 feet in front of me. “Are you okay?” “I don’t know what happened,” she said, “I’ve never fallen down before.” “It happens to the best of us,” I assured her. I offered her a hand, but she seemed to be in too much pain to get up. “Do you have a phone?” “Is there someone I should call for you?” “I’m on my way to church,” she told me. 10 Notorious Cases of the Bystander Effect. Why we still look away: Kitty Genovese, James Bulger and the bystander effect. More than half a century later, the death of Kitty Genovese continues to remind us of the disconnect between what we believe about ourselves and how we really act under pressure.

The murder of the 28-year-old outside her apartment in the Queens neighborhood of Kew Gardens in the early morning of 13 March 1964 rippled through New York City and around the world. How could a young, independent woman who lived on her own terms be so easily struck down? How could so many neighbors look on and turn away as she was stabbed repeatedly on the street and in her apartment building? What did that collective inability to act reveal about ourselves, our communities, and our belief systems? Genovese’s killer, Winston Moseley, died in prison this week, bringing the case and its implications back into the spotlight.

Two weeks after her murder, Rosenthal assigned a story with the damning headline: “Thirty-Seven Who Saw Murder Didn’t Call Police.” Bystander inaction, like 7-Eleven assault, more likely with more witnesses, experts say - Chicago Tribune. From Empathy to Apathy: The Bystander Effect Revisited - Ruud Hortensius, Beatrice de Gelder, 2018. When people are asked whether they would spontaneously assist a person in an emergency situation, almost everyone will reply positively.

Although we all imagine ourselves heroes, the fact is that many people refrain from helping in real life, especially when we are aware that other people are present at the scene. In the late 1960s, John M. Darley and Bibb Latané (1968) initiated an extensive research program on this so-called “bystander effect.” In their seminal article, they found that any person who was the sole bystander helped, but only 62% of the participants intervened when they were part of a larger group of five bystanders. Following these first findings, many researchers consistently observed a reduction in helping behavior in the presence of others (Fischer et al., 2011; Latané & Nida, 1981). Moral Frames and Bystander Behavior in School. The Bystander Effect, A Meta Analytic Review on Bystander Intervention in Dangerous and Non Dangerous Emergencies.

Bystander intervention in emergencies Diffusion of responsibility. How to Break the Bystander Effect. They could have left it to someone else. An Army veteran blocked a shooter in Oregon from entering his classroom. Three friends on a high-speed train from Paris to Amsterdam helped stop a gunman wielding an AK-47. This past spring, an Army captain in North Carolina pulled a couple to safety after a fiery car crash.

Were these men instinctively courageous, or had they learned to be? The Army captain (aptly wearing a Captain America T-shirt) credited his military training for knowing what to do and remaining calm. These heroes are dramatic examples. And this conundrum is not limited to thwarting terrorism or physically saving someone. How To Counteract The Bystander Effect - University of Pittsburgh Student EMS. Counteracting The Bystander Effect It is a beautiful spring day in Oakland.

There are just a few weeks left until summer break and everyone is ready to go home. You are in Cathy studying and you see that the person a few tables over seems to be passed out. You notice they haven't moved in hours. Hundreds of people have walked by and seem to take notice but no one has done anything. Return To PITTect Your Friends HomePage Create your own unique website with customizable templates. Get Started. How to Overcome the Bystander Effect. Psychologists have long been interested in exactly why and when we help other people.