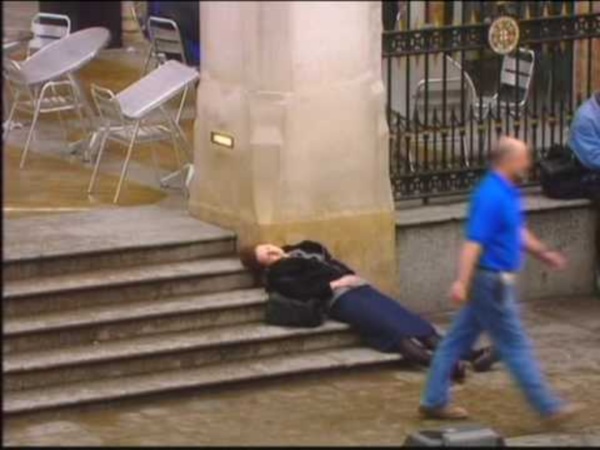 Overcoming Bystander Effect as a Bystander Psychologists have long been interested in exactly why and when we help other people. There has also been a tremendous amount of interest in the reasons why we sometimes don't help others. The bystander effect is a social phenomenon that occurs when people fail to help those in need due to the presence of other people. 'Bystander Effect' not exclusive to humans A rat is less likely to help a trapped companion if it is with other rats that aren't helping, according to new research from the University of Chicago that showed the social psychological theory of the "bystander effect" in humans is present in these long-tailed rodents. The study, titled "The Bystander Effect in Rats," also demonstrated that in the presence of other potential helper rats, rats are more, rather than less, likely to help. Whether helping is facilitated or suppressed depends on the circumstances rather than on personal temperament or morals, a finding with implications for human society.

Bystander effect: Famous psychology result could be completely wrong By Grace Browne SolStock/Getty If you were being attacked, would anyone stop to help you? A famous result in psychology known as the bystander effect says probably not, but now a review of real-life violent situations says this commonly held view may be wrong. The bystander effect purports that in situations such as a robbery or a stabbing, bystanders are less likely to step in if there are a large number of people in the area, so the likelihood of intervention decreases. The idea has its roots in the 1964 case of Kitty Genovese, a 28-year-old woman who was raped and murdered in the early morning in her quiet neighbourhood in Queens, New York.

What Is The Bystander Effect? - WorldAtlas By Antonia Čirjak on February 11 2020 in Society Psychologists argue that the number of people who are around us when a problem is happening may be a strong factor in deciding on wether or not we help. The murder of Catherine Genovese which happened in 1964 is one of the most well-known examples of the bystander effect.

Use Technology to combat the bystander effect The responsibility to help during an emergency falls on anyone present and capable of lending a hand. While there may be occasional good Samaritans who are able to aid, more often than not, the main responsibility falls on emergency respondents to step in. Understandably, the shock of witnessing a mugging, hijacking, terrorist attack or even a car accident can leave a bystander paralysed with shock and uncertain about what to do, or even fearful of getting involved altogether. A harrowing, often-cited case in point is the 1964 murder of Kitty Genovese – a New York woman was stabbed to death outside her apartment while dozens of witnesses reportedly heard her crying for help, and not a single one stepped into help or even called the police. While recent investigations have called into question just how many witnesses there were at the scene, the fact is that no one offered to help or even call for qualified aid. The more bystanders there are, the lower the chances that any will intervene.

The bystander effect in rats Abstract To investigate whether the classic bystander effect is unique to humans, the effect of bystanders on rat helping was studied. In the presence of rats rendered incompetent to help through pharmacological treatment, rats were less likely to help due to a reduction in reinforcement rather than to a lack of initial interest. Only incompetent helpers of a strain familiar to the helper rat exerted a detrimental effect on helping; rats helped at near control levels in the presence of incompetent helpers from an unfamiliar strain. Duos and trios of potential helper rats helped at superadditive rates, demonstrating that rats act nonindependently with helping facilitated by the presence of competent-to-help bystanders. Furthermore, helping was facilitated in rats that had previously observed other rats’ helping and were then tested individually.

The Bystander Effect is about more than the diffusion of responsibility Inspired by the shocking murder of a woman in New York in 1964, reportedly in front of numerous witnesses who did nothing to help (although this was exaggerated), the Bystander Effect is a well-researched phenomenon that describes the diminishing likelihood that any one person will help as the number of other people available to help increases. The most popular and widely researched explanation is that people experience a diffusion of responsibility when in the company of other bystanders. We don’t help the person who is being assaulted in a busy street because we assume that someone else will. But a new study in the Journal of Experimental Psychology: General provides evidence that there is much more to it than this – in particular, when deciding whether to help, we take into account the perspective of the other bystanders – whether they know that help is needed, whether they know that we know that help is needed, whether they know that we know they know that help is needed, and so on.

37 Who Saw Murder of Kitty Genovese Didn't Call the Police; Apathy at Stabbing of Queens Woman Shocks Inspector The man explained that he had called the police after much celiberation. He had phoned a friend in Nassau County for advice and then he had crossed the roof of the building to the apartment of the elderly woman to get her to make the call. “I didn't want to get involved,” he sheepishly told the police. If You Need Help, You'd Better Ask For It Picture this. You’re out hiking in the wilderness—all alone and miles from civilization. You turn a corner on the trail and come upon a young man in torn clothes, looking disheveled and a little incoherent.

Example: George Floyd's Death - Police violence and the ‘bystander effect’ explained Since George Floyd died after police officer Derek Chauvin knelt on his neck for almost nine minutes on May 25, demonstrators across the country have gathered to protest police actions against African Americans. While most of the protests were calm, in several cities police officers have used force against demonstrators and journalists under the justification of crowd control. The sight of officers in riot gear beating marchers, firing rubber bullets and chemical- or pepper-based irritants, and shoving activists has reignited questions about accepted practices in the nation’s law enforcement community. Francesca Gino, Tandon Family Professor of Business Administration at Harvard Business School, studies leadership, the psychology of decision-making, and organizational behavior.

The Bystander Effect and Altruism Learning Objectives Explain the factors that influence human altruism, including reciprocal altruism and diffusion of responsibility. Go to YouTube and search for episodes of “Primetime: What Would You Do?” You will find video segments in which apparently innocent individuals are victimized, while onlookers typically fail to intervene. The events are all staged, but they are very real to the bystanders on the scene. The entertainment offered is the nature of the bystanders’ responses, and viewers are outraged when bystanders fail to intervene. How to Overcome the Bystander Effect Psychologists have long been interested in exactly why and when we help other people. There has also been a tremendous amount of interest in the reasons why we sometimes don't help others. The bystander effect is a social phenomenon that occurs when people fail to help those in need due to the presence of other people. In many cases, people feel that since there are other people around, surely someone else will leap into action.1 While the bystander effect can have a negative impact on prosocial behavior, altruism and heroism, researchers have identified a number of different factors that can help people overcome this tendency and increase the likelihood that they will engage in helping behaviors.2 Some of these include:

The diffusion of responsibility. Interesting for social campaigns requiring people involvement. by planningclmbbdo May 19