Bystander Effect: What is it? And what can we do to counteract?

The "Bystander Effect" occurs when the presence of others discourages an individual from intervening in an emergency situation, against a bully, or during an assault or other crime.

The greater the number of bystanders, the less likely it is for any one of them to provide help to a person in distress. People are more likely to take action in a crisis when there are few or no other witnesses present. In this resource centre, we will look deeper into the Bystander Effect, how this phenomenon has its consequences with real life scenarios with a main focus on bullying and its digital media while adopting bystander intervention techniques. What Is the Bystander Effect? Are We Victims Of "Bystander Effect"? Bystander Revolution: Dr. Philip Zimbardo.

While we might all like to believe that this is true, psychologists suggest that whether or not you intervene might depend upon the number of other witnesses present. What Is the Bystander Effect? The term bystander effect refers to the phenomenon in which the greater the number of people present, the less likely people are to help a person in distress. When an emergency situation occurs, observers are more likely to take action if there are few or no other witnesses. Being part of a large crowd makes it so no single person has to take responsibility for an action (or inaction). In a series of classic studies, researchers Bibb Latané and John Darley found that the amount of time it takes the participant to take action and seek help varies depending on how many other observers are in the room. Teens Harass And Humiliate the Homeless.

The Science of Empathy. THE BYSTANDER EFFECT. Caught On Cam: Bystanders react to bullying experiment. An avoidable murder of a student caught on tape: the sickening power of the bystander effect. On Sept. 17, the life of a 16-year-old high schooler in Long Island ended tragically in a violent brawl outside a strip mall.

Khaseen Morris was told to show up outside the mall at a certain time by several others his age, after he was seen walking home the girlfriend of another boy. Morris showed up and was immediately attacked by a group of five teenagers. A senseless brawl erupted and Morris was stabbed repeatedly in the chest, dying later that night in the hospital.

The tragedy of Morris’s murder extends beyond the senselessness of his violent death and the fact that an innocent young life ended so abruptly over a trivial adolescent dispute. The horrific nature of Morris’s murder is amplified by the fact that the brawl occurred in broad daylight and was filmed by a group of 50 teenagers, so that Morris’s stabbing was caught on dozens of phone cameras. It is deeply disturbing that the impulse to document Morris’s death far outweighed any instinct to help him. Sexual assault and the bystander effect: Inaction of passers-by is a grave problem which needs to be addressed - India News , Firstpost. Why do bystanders often stand and stare instead of helping the victim? 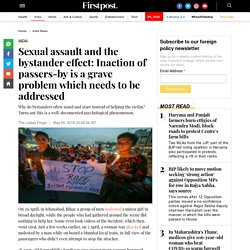 Turns out this is a well-documented psychological phenomenon. On 29 April, in Jehanabad, Bihar, a group of men molested a minor girl in broad daylight, while the people who had gathered around the scene did nothing to help her. Some even took videos of the incident, which then went viral. Don't stop and stare: Bystander apathy at Nungambakkam railway station cost Swathi her life - India News , Firstpost.

Research into bystander apathy began in the 1960s, following public outrage over the sensational murder of 29-year-old Kitty Genovese in Queens, New York in 1964. 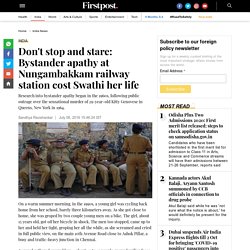 On a warm summer morning, in the 1990s, a young girl was cycling back home from her school, barely three kilometers away. As she got close to home, she was groped by two couple young men on a bike. The girl, about 15 years old, got off her bicycle in shock. The men too stopped, came up to her and held her tight, groping her all the while, as she screamed and cried in full public view, on the main 10th Avenue Road close to Ashok Pillar, a busy and traffic-heavy junction in Chennai.

China wonders if, in the rush of life, it has lost its soul - World News , Firstpost. A shocking video of a two-year-old girl who lay bleeding on the roadside after being run over has stirred the conscience of Chinese people - and led them to wonder where their Good Samaritans have gone... 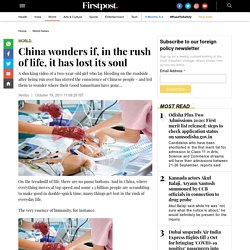 On the treadmill of life, there are no pause buttons. And in China, where everything moves at top speed and some 1.3 billion people are scrambling to make good in double-quick time, many things get lost in the rush of everyday life. The very essence of humanity, for instance. Image from china.org. ‘Nobody helped’: Ray Hsu says calls for help were ignored during alleged assault. UPDATE: VPD said a man has turned himself in following an assault on Main Street Thursday. 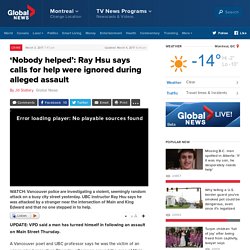 A Vancouver poet and UBC professor says he was the victim of an unprovoked assault on Thursday afternoon around the area of Main Street and West 25th Avenue. He says nobody came to help while he was being punched repeatedly. Ray Hsu says he was getting off the bus when someone shoved him from behind. “This is someone who I don’t know and have never seen before. I had a feeling that something might happen,” Hsu told Global News. He then took a photo of the man. “This person saw me taking the photo, knocked the camera out of my hands and started punching me in the face.”

Imagine this: You are walking down the street when suddenly you hear harrowing screams. 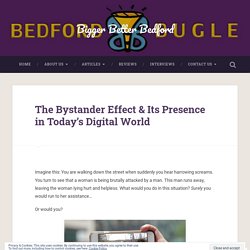 You turn to see that a woman is being brutally attacked by a man. This man runs away, leaving the woman lying hurt and helpless. What would you do in this situation? Surely you would run to her assistance… The 21st century bystander effect happens every day online. If you’re going to fall, injure yourself and need help, where is a good place to do it?

Should you choose a busy thoroughfare or a deserted backstreet? Statistics and experiments in social psychology will tell you that if you need help, you should avoid dropping in a busy street, even if hundreds of people are passing through. This is because of a phenomenon known as the bystander effect. The more individuals gathered in one place, the less chance there is of one of them coming to the aid of a person in need. When an emergency situation occurs, it’s more likely that someone will come to the rescue if there are fewer or almost no witnesses. TODAYonline. I refer to the news reports of the fatal traffic accident on Sunday (Dec 29) at Lucky Plaza.

I applaud the Good Samaritans who unselfishly helped to lift up the car, pulled the victims out and attended to them. What the Kitty Genovese Killing Can Teach Today’s Digital Bystanders. As Retro Report notes, two social psychologists in New York, John M. Darley and Bibb Latané, conducted experiments that led them to posit that Ms. Genovese might have survived had there been fewer witnesses. Numbers can inhibit action, they concluded. “You think that if there are many people who are witness to something that other people certainly already have done something — why should it be me?” Dr. A 2015 article in The Wisconsin Law Review cited studies showing that most instances of school bullying are witnessed by other students and that in nearly one-third of reported sexual assaults, third parties are present.

The Importance of Bystander Power. Bystanders to Bullying. Someone who witnesses bullying, either in person or online, is a bystander. 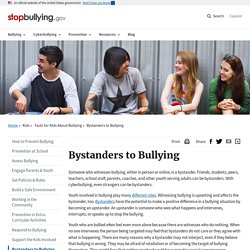 Friends, students, peers, teachers, school staff, parents, coaches, and other youth-serving adults can be bystanders. With cyberbullying, even strangers can be bystanders. Youth involved in bullying play many different roles. Addressing Bullying: Teaching Children to Be Active Bystanders - Committee for Children. Disturbing bullying reports can be used to teach kids about bystander intervention, advocates say. Advocates say shocking new videos showing extreme bullying offer parents and educators an opportunity to teach young witnesses the importance of bystander intervention. "Targeting behavioural change from the bully is not as effective as targeting the bystander to make a culture shift," said Gordana Skrba of the Ontario Federation for Cerebral Palsy.

A video posted Nov. 8 showed a 14-year-old Nova Scotia boy with cerebral palsy lying down in a stream as a girl steps on his back. About 20 students were watching, some filming on their phones. Then came last week's news about two videotaped incidents at St. Michael's College School in Toronto. Toronto police said Monday six teenage boys had been charged with assault and sexual assault. BYSTANDER INTERVENTION. Teaching bystanders to intervene. My colleague was harassed by a male passenger on the MRT and nobody helped. Here's what I'd have done. - The Pride.

What’s worse than being targeted with harassment because of your race, sex, religion, color, gender, size, orientation, disability, age, or origin? Alan Berkowitz, Ph.D. In these clips I share stories of myself as a bystander and how I responded, along with advice for intervening successfully. "I was taught to confront bad behavior pretty aggressively. (Call someone out.) She was hurt and bleeding in the MRT – then a kind stranger defied the bystander effect to help - The Pride.

Quiz: What’s your bystander style? - CampusWell. Read this article and enter to win a $50 Amazon gift card Bystander intervention is about the small things we all do for our friends and communities. When we see that someone is experiencing unwanted attention or pressure, we have a variety of ways we can check in: anything from a simple hello to a more creative disruption. MY Consent Day Bystander Quiz: What would YOU do? Survey. Active bystander.