Understanding the Bystander Effect and how to overcome it.

The term bystander effect refers to the phenomenon in which the greater the number of people present, the less likely people are to help a person in distress. Instead, they just watch what is happening.

The most common explanation of this phenomenon is that the more people present, the more likely the individual observer will pass off the responsibility to help the victim, unfortunately believing that there is bound to be someone who is helping already or is going to help soon.

Therefore, it is pivotal for us to identify the causes of the bystander effect and various ways to cope with the effect. THE BYSTANDER EFFECT. Kitty Genovese. The Kitty Genovese murder in Queens, New York, in 1964 is one of the most famous murder cases to come out of New York City and into the national spotlight.

What propelled it wasn’t the crime or the investigation, but the press coverage that alleged the murder had many witnesses who refused to come to the Kitty Genovese’s defense. This has been disproved over time, but not before it became part of the accepted lore of the crime. Kitty Genovese was returning from work home at around 2:30 a.m. on March 13, 1964, when she was approached by a man with a knife. 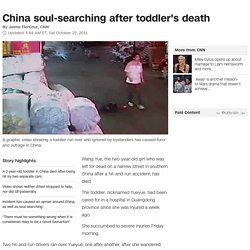 The toddler, nicknamed Yueyue, had been cared for in a hospital in Guangdong province since she was injured a week ago. She succumbed to severe injuries Friday morning. Two hit-and-run drivers ran over Yueyue, one after another, after she wandered into the alley outside her father's hardware store. Both fled the scene but are now under arrest. Death of Wang Yue. As motorcyclist cries out for help after road accident, bystander filming the incident asks if he’s Chinese. - Advertisement - Singapore—Vehicular accidents are hard enough and require everyone involved to keep calm and help those who are in danger. 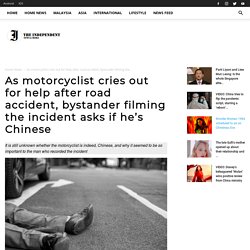 This is why it was very surprising that when a collision between a taxi and a motorbike resulted in the motorcyclist trapped under the cab, obviously injured, one bystander who captured the aftermath of the crash on film was recorded asking, “Are you Chinese?” On Tuesday night (June 16), a road accident occurred between a TransCab taxi SHC5866A and a motorcycle at Jurong West Street 24. Lucky Plaza accident: 2 dead, 4 injured after car rams them on footpath; driver arrested. SINGAPORE: Two people died and four other pedestrians were injured after an accident involving a car at Lucky Plaza shopping centre on Sunday afternoon (Dec 29). 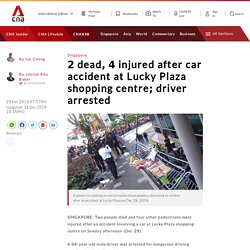 A 64-year-old male driver was arrested for dangerous driving causing death, police said. According to eyewitnesses, the car ran into women along a walkway near the shopping centre. READ: Sisters in Lucky Plaza accident were 'extremely generous' to friends, family, says brother READ: Friends and family pay respects to mother-of-two who died in Lucky Plaza car crash Police said they were alerted to the incident along Orchard Road at about 5pm involving a car and six female pedestrians aged between 37 and 56. Similarities of the 2 incidents. Cohesion. A summary of Gregory's Experiment. Bystander intervention in emergencies diffusion of responsibility. Responsibility. The bystander effect and social control. Social Norms. Behavioral disinhibition may help to overcome the bystander effect. Behavioral Disinhibition. Reduce Bystander effect. Asking for help. Essential Social Psychology - Richard J. Crisp, Rhiannon N. Turner - Google Books.

Ways to overcome bystander effect based on the attached book. Teaching bystanders to intervene. BYSTANDER INTERVENTION. In summary. How to be kinder to strangers in Singapore, Opinion News. The Charities Aid Foundation recently released the World Giving Index 2017, which provides insight into the scope and nature of giving around the world. Based on data collected from the Gallup World Poll, the index, which polled 1,000 individuals in each representative country, revealed two surprising facts. 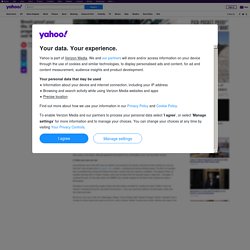 TODAYonline. This week, an accident behind Lucky Plaza mall that claimed the lives of two Filipino women and wounded four others sent shockwaves through Singapore. 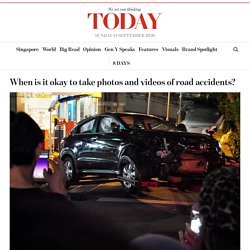 In a letter to TODAY, reader Francis Cheng said it remained common for people to stop at an accident scene to take videos and photos. But this, he said, cannot be at the expense of helping victims. He urged bystanders to refrain from taking photos and videos, and the Government to enact a law — similar to Germany’s — that makes it a crime for anyone who does so instead of helping. Responding to his suggestion, TODAY’s readers supported having such a law, saying that the first instinct should be to help the victims as time is of the essence. Yet others said enforcement would be hard, because some people may not be equipped with the skills to help in accidents. It is really terrible of bystanders who do not help in accidents such as this. Agree. Summary. Quiz: Are You A Bully, Victim, Passive Bystander, Or An Active Bystander?