Will you help others when they are in an emergency situation in the crowd?

You notice a man fall to the ground and start convulsing as if having a seizure. Many people turn and look at the man, but no one moves to help or call for medical assistance. Why? Because there are so many people present, no one person feels pressured to respond. This situation is often used to explain the bystander effect, which suggests that the greater the number of people present, the less likely people are to help a person in distress. Darley and Latané on Diffusion of Responsibility In a series of classic experiments conducted in the late 1960s, researchers John Darley and Bibb Latané asked participants to fill out questionnaires in a room which suddenly began to fill with smoke.2. Video: Diffusion of Responsibility.

As one example, imagine the following scenario: You are sitting in a large lecture hall listening to an especially complicated lecture. After many minutes of incomprehensible material, the lecturer pauses and asks if there are any questions. No hands go up. You look around the room. Another case of pluralistic ignorance that is familiar to many college students concerns drinking on campus. Pluralistic Ignorance and Social Dynamics Pluralistic ignorance plays a role in many other dysfunctional social dynamics.

Pluralistic Ignorance and Social Norms Pluralistic ignorance begins with widespread conformity to social norms—norms that govern appropriate behavior in the classroom, at a party, in a boardroom, or in a hospital; norms that regulate behavior with friends, strangers, or colleagues. References: O’Gorman, H. PLURALISTIC IGNORANCE. The Bystander Effect:The Death of Kitty Genovese. Hit and Run in China, no one helps. THE BYSTANDER EFFECT. THE BYSTANDER EFFECT.

Imagine that you are walking into a large department store. Being Observant Being Skilled and Knowledgeable Guilt Feeling Good. The Bystander Effect vs. The Good Samaritan Effect. Bystander Intervention - The Challenge – CSB/SJU. CSB and SJU describe themselves as communities that are caring, hospitable, and welcoming. 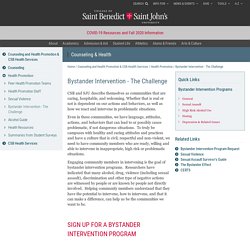 Whether that is real or not is dependent on our actions and behaviors, as well as how we react and intervene in problematic situations. Even in these communities, we have language, attitudes, actions, and behaviors that can lead to or possibly cause problematic, if not dangerous situations. To truly be campuses with healthy and caring attitudes and practices and have a culture that is civil, respectful and non-violent, we need to have community members who are ready, willing and able to intervene in inappropriate, high risk or problematic situations. Engaging community members in intervening is the goal of bystander intervention programs. Researchers have indicated that many alcohol, drug, violence (including sexual assault), discrimination and other type of negative actions are witnessed by people or are known by people not directly involved.