Definition of Bystander effect. What Is the Bystander Effect? If you witnessed an emergency happening right before your eyes, you would certainly take some sort of action to help the person in trouble, right?

While we might all like to believe that this is true, psychologists suggest that whether or not you intervene might depend upon the number of other witnesses present. What Is the Bystander Effect? The term bystander effect refers to the phenomenon in which the greater the number of people present, the less likely people are to help a person in distress.

When an emergency situation occurs, observers are more likely to take action if there are few or no other witnesses. THE BYSTANDER EFFECT. Social experiments conducted about Bystander Effect. The Science of Empathy. Diffusion of responsibility. How Diffusion of Responsibility Affects Group Behavior. Diffusion of responsibility is a psychological phenomenon in which people are less likely to take action when in the presence of a large group of people.1 For example, imagine that you are in a large city on a bustling street.

You notice a man fall to the ground and start convulsing as if having a seizure. Many people turn and look at the man, but no one moves to help or call for medical assistance. Why? Because there are so many people present, no one person feels pressured to respond. Diffusion of Responsibility: Definition and Examples in Psychology.

As one example, imagine the following scenario: You are sitting in a large lecture hall listening to an especially complicated lecture. After many minutes of incomprehensible material, the lecturer pauses and asks if there are any questions. No hands go up. You look around the room. Another case of pluralistic ignorance that is familiar to many college students concerns drinking on campus. Social influence and conformity. Social Inhibition. Asch Experiment. Solomon Asch - Conformity Experiment By Saul McLeod, updated Dec 28, 2018 Solomon Asch conducted an experiment to investigate the extent to which social pressure from a majority group could affect a person to conform. 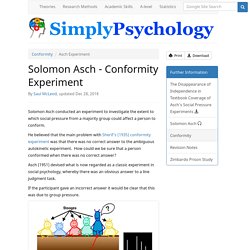 He believed that the main problem with Sherif's (1935) conformity experiment was that there was no correct answer to the ambiguous autokinetic experiment. How could we be sure that a person conformed when there was no correct answer? Asch (1951) devised what is now regarded as a classic experiment in social psychology, whereby there was an obvious answer to a line judgment task. If the participant gave an incorrect answer it would be clear that this was due to group pressure. Experimental Procedure Experimental Procedure Asch used a lab experiment to study conformity, whereby 50 male students from Swarthmore College in the USA participated in a ‘vision test.’ Using a line judgment task, Asch put a naive participant in a room with seven confederates/stooges.

Findings. How the Social Context Influences Helping – Principles of Social Psychology – 1st International Edition. Review Bibb Latané and John Darley’s model of helping behavior and indicate the social psychological variables that influence each stage. Although emotional responses such as guilt, personal distress, and empathy are important determinants of altruism, it is the social situation itself—the people around us when we are deciding whether or not to help—that has perhaps the most important influence on whether and when we help. Consider the unusual case of the killing of 28-year-old Katherine “Kitty” Genovese in New York City at about 3:00 a.m. on March 13, 1964.

Her attacker, Winston Moseley, stabbed and sexually assaulted her within a few yards of her apartment building in the borough of Queens. During the struggle with her assailant, Kitty screamed, “Oh my God! He stabbed me! Why do people help? The Bystander Effect and Altruism. Learning Objectives Explain the factors that influence human altruism, including reciprocal altruism and diffusion of responsibility.

Go to YouTube and search for episodes of “Primetime: What Would You Do?” You will find video segments in which apparently innocent individuals are victimized, while onlookers typically fail to intervene. 3 Ways to overcome bystander effect. Reducing the Bystander Effect. As discussed, there are a number of factors that magnify the Bystander Effect.

Fortunately, there are also a number of factors that weaken it. Once again, factors can be divided into characteristics of the situation, and of the people. Situational characteristics. Bystander Intervention. Darley and Latane, the forefathers of bystander intervention, identified five stages that people move through when taking action in a problematic situation. 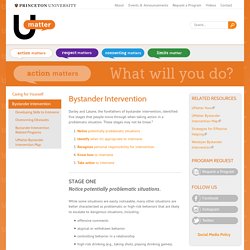 These stages may not be linear.1 STAGE ONENotice potentially problematic situations. While some situations are easily noticeable, many other situations are better characterized as problematic or high-risk behaviors that are likely to escalate to dangerous situations, including: offensive comments atypical or withdrawn behavior controlling behavior in a relationship high-risk drinking (e.g., taking shots, playing drinking games). Sometimes, a person’s gut instinct or intuition can be the best cue that a problem exists. STAGE TWOIdentify when it’s appropriate to intervene. The next step is interpreting the situation as a problem in need of intervention.

Counter to Bystander Effect. Bystander effect: Famous psychology result could be completely wrong. By Grace Browne SolStock/Getty If you were being attacked, would anyone stop to help you? 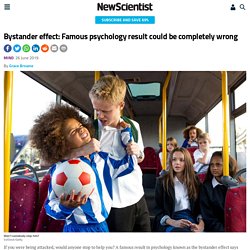 A famous result in psychology known as the bystander effect says probably not, but now a review of real-life violent situations says this commonly held view may be wrong. The Bystander Effect is about more than the diffusion of responsibility. Inspired by the shocking murder of a woman in New York in 1964, reportedly in front of numerous witnesses who did nothing to help (although this was exaggerated), the Bystander Effect is a well-researched phenomenon that describes the diminishing likelihood that any one person will help as the number of other people available to help increases. 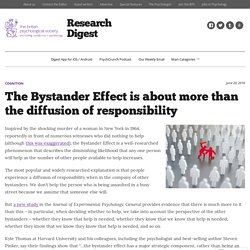 The most popular and widely researched explanation is that people experience a diffusion of responsibility when in the company of other bystanders. We don’t help the person who is being assaulted in a busy street because we assume that someone else will.