The Bystander Effect and How to Counteract It

When in a public place crowded with people, have you ever felt apprehension at checking on someone who seems to be in trouble?

Why do people tend to be able to ignore others in need when in a crowded space?

Why do they feel more compelled to help the person if they find themselves to be the only other person, or perhaps with just a few others?

While we might all like to believe that this is true, psychologists suggest that whether or not you intervene might depend upon the number of other witnesses present. Definitions of the Bystander Effect and who coined it? Bystander Apathy. Bystander effect. Bystander effect, the inhibiting influence of the presence of others on a person’s willingness to help someone in need.

Research has shown that, even in an emergency, a bystander is less likely to extend help when he or she is in the real or imagined presence of others than when he or she is alone. Moreover, the number of others is important, such that more bystanders leads to less assistance, although the impact of each additional bystander has a diminishing impact on helping. Investigations of the bystander effect in the 1960s and ’70s sparked a wealth of research on helping behaviour, which has expanded beyond emergency situations to include everyday forms of helping. By illuminating the power of situations to affect individuals’ perceptions, decisions, and behaviour, study of the bystander effect continues to influence the course of social psychological theory and research.

Bystander intervention Get exclusive access to content from our 1768 First Edition with your subscription. Bystander Effect - IResearchNet. Bystander Effect Definition Individuals who see or hear an emergency (but are otherwise uninvolved) are called bystanders.

The bystander effect describes the phenomenon in which such individuals are less likely to seek help or give assistance when others are present. This does not mean that bystanders are apathetic to the plight of others, for bystanders often show signs of distress, anxiety, and concern if they delay responding or fail to respond at all. It also does not necessarily mean that a victim will be less likely to receive help as the number of bystanders present increases—after all, the greater the number of other people present, the greater is the likelihood that at least one of them will intervene. Bystander Effect: What Is It and What You Can Do About It. What the bystander effect looks like A little after 3 a.m. on March 13, 1964, Catherine “Kitty” Genovese parked her car and walked to her apartment in Queens, New York, after finishing her shift as a bar manager. Serial killer Winston Moseley was out to victimize someone that night.

Genovese became his target. When he followed her, she ran. As Moseley reached her and began stabbing her with a hunting knife, Genovese screamed, “Oh, my God, he stabbed me! When lights in surrounding apartments flipped on and one man called out his window, the attacker ran and hid in the shadows. How Diffusion of Responsibility Affects Group Behavior.

You notice a man fall to the ground and start convulsing as if having a seizure. Many people turn and look at the man, but no one moves to help or call for medical assistance. Why? Because there are so many people present, no one person feels pressured to respond. Pluralistic Ignorance - Social Psychology. Pluralistic Ignorance Definition Pluralistic ignorance occurs when people erroneously infer that they feel differently from their peers, even though they are behaving similarly.

As one example, imagine the following scenario: You are sitting in a large lecture hall listening to an especially complicated lecture. After many minutes of incomprehensible material, the lecturer pauses and asks if there are any questions. No hands go up. You look around the room. Another case of pluralistic ignorance that is familiar to many college students concerns drinking on campus. Pluralistic Ignorance and Social Dynamics. Reasons for not helping. Woman hit by taxi is run over by SUV in China. Horrifying footage emerged online showing a woman being hit by a taxi and left lying in the middle of a crossroad for more than two minutes. 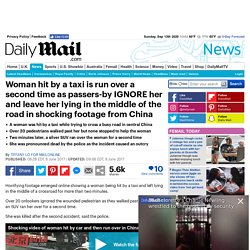 Over 20 onlookers ignored the wounded pedestrian as they walked past her before an SUV ran her over for a second time. She was killed after the second accident, said the police. Shocking video of woman hit by car and then run over in China Loaded: 0% Progress: 0% Police: As many as 20 present at gang rape outside school dance - CNN.com. China soul-searching after toddler's death - CNN. Wang Yue, the two-year-old girl who was left for dead on a narrow street in southern China after a hit-and-run accident, has died. 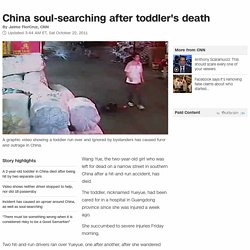 The toddler, nicknamed Yueyue, had been cared for in a hospital in Guangdong province since she was injured a week ago. She succumbed to severe injuries Friday morning. Two hit-and-run drivers ran over Yueyue, one after another, after she wandered into the alley outside her father's hardware store. Both fled the scene but are now under arrest. But there was one thing more shocking than the double hit-and-run: the seeming apathy by pedestrians, cyclists and drivers—18 of them—who did not stop to help. Yueyue laid motionless in the street for 10 minutes until Chen Xianmei, a 58-year-old woman who collects trash for a living, passed by.

A New York student was fatally stabbed while onlookers took a video of his suffering. Tyler Flach is charged with second-degree murder in the death of 16-year-old Khaseen Morris, killed after a fight at a strip mall near Oceanside High School on Monday in Nassau County, New York. 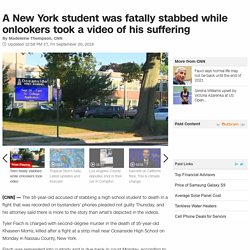 Flach was remanded into custody and is due back in court Monday, according to Brendan Brosh, a spokesman for the Nassau County District Attorney. Defense attorney Edward Sapone said Flach maintains his innocence. When the fight broke out Monday, a group of 50-70 teenagers looked on as Morris was assaulted and stabbed in the chest, according to Detective Lt. Stephen Fitzpatrick of the Nassau County Police Department. Some took out their phones and documented the fight on social media, but no one stepped in to help Khaseen, who died from his wounds after being taken to the hospital, Fitzpatrick said. He said several of those in the crowd have come forward with information. What the news articles tell us. The smoke filled room study.