The bystander effect, also called bystander apathy, refers to a phenomenon in which an individual is discouraged to provide assistance to someone in an urgent or emergency situation when there are others present.

What propelled it wasn’t the crime or the investigation, but the press coverage that alleged the murder had many witnesses who refused to come to the Kitty Genovese’s defense. This has been disproved over time, but not before it became part of the accepted lore of the crime. Kitty Genovese was returning from work home at around 2:30 a.m. on March 13, 1964, when she was approached by a man with a knife. Genovese ran toward her apartment building front door, and the man grabbed her and stabbed her while she screamed. Bystanders ignored man dying on métro platform, coroner says.

Torture and Death of Jew Deepen Fears in France. The police did not yet know the identities of the gang members but were close on their heels. 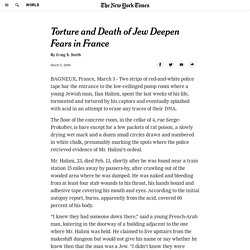 Around Feb. 10, Mr. Fofana briefly visited an Internet cafe on the Rue de la Fidélité in the 10th Arrondissement, wearing a cap and a scarf that covered his mouth and nose. "I don't even think he took his gloves off," the manager said Friday. Just 15 minutes later, he said, police officers arrived looking for a black man, a computer-generated sketch in hand. They lifted fingerprints from the keyboard Mr. On the evening of Feb. 13, Mr.

Two days later, with the case beginning to make shocking headlines, Mr. Gang rape raises questions about bystanders' role. From Empathy to Apathy: The Bystander Effect Revisited. Bystanders’ Reactions to Bullying A Cross cultural Analysis of Personal Correlates Among Italian and Singaporean Students. Bystander Responses to a Violent Incident in an Immersive Virtual Environment. Simulating Social Situations in Immersive Virtual Reality A Study of Bystander Responses to Violent Emergencies. How to Overcome the Bystander Effect. Psychologists have long been interested in exactly why and when we help other people.

Imagine that you are walking into a large department store. Family Violence Is Not A “Family” Issue - CityOfGood. It’s a community issue, and we can all choose to stay silent – or act to end abuse. 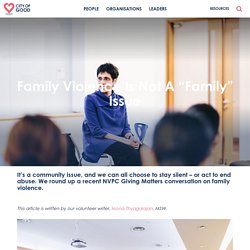 We round up a recent NVPC Giving Matters conversation on family violence. This article is written by our volunteer writer, Mona Thyagarajan, MSW. Dr Sudha Nair, founder of Pave, at an NVPC Giving Matters conversation on family violence Domestic violence is terrorism in the home. Strong words, perhaps, but there’s no other way to describe the systematic use of physical and verbal violence against a family member, PAVE founder Dr Sudha Nair states. Domestic violence is not just domestic. Bystanders should stop taking photos and videos of accidents and victims.

I refer to the news reports of the fatal traffic accident on Sunday (Dec 29) at Lucky Plaza.

How tech can combat the bystander effect. The responsibility to help during an emergency falls on anyone present and capable of lending a hand. 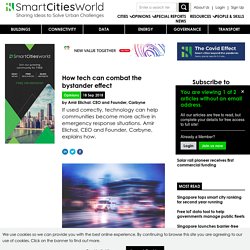 Technology and the bystander effect: A crippling combination. Many people don’t understand where to draw the line when it comes to using technology. 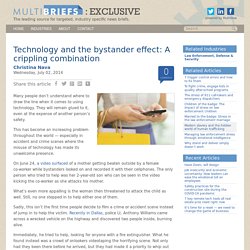 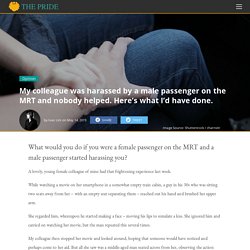 A lovely, young female colleague of mine had that frightening experience last week. While watching a movie on her smartphone in a somewhat empty train cabin, a guy in his 30s who was sitting two seats away from her – with an empty seat separating them – reached out his hand and brushed her upper arm. She regarded him, whereupon he started making a face – moving his lips to simulate a kiss. She ignored him and carried on watching her movie, but the man repeated this several times. My colleague then stopped her movie and looked around, hoping that someone would have noticed and perhaps come to her aid. Bundled interventions improve bystander CPR, increase out-of-hospital cardiac arrest survival.

SINGAPORE / DURHAM, NC, USA, 3 September 2020 – A new study published in The Lancet Public Health found that a series of public health interventions in Singapore cumulatively increased the likelihood of cardiopulmonary resuscitation (CPR) by bystanders during out-of-hospital cardiac arrests (OHCA) nearly eightfold and survival over threefold, underscoring the importance of such interventions to improve OHCA outcomes. 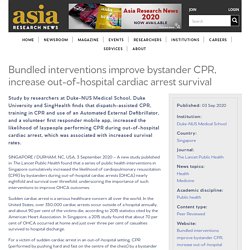 Sudden cardiac arrest is a serious healthcare concern all over the world. In the United States, over 350,000 cardiac arrests occur outside of a hospital annually, and about 90 per cent of the victims die, according to 2015 statistics cited by the American Heart Association. In Singapore, a 2015 study found that about 70 per cent of OHCA occurred at home and just over three per cent of casualties survived to hospital discharge. CHANGING PUBLIC PERCEPTIONS OF CHILD ABUSE AND NEGLECT IN SINGAPORE.