Are We Victims Of "Bystander Effect"? 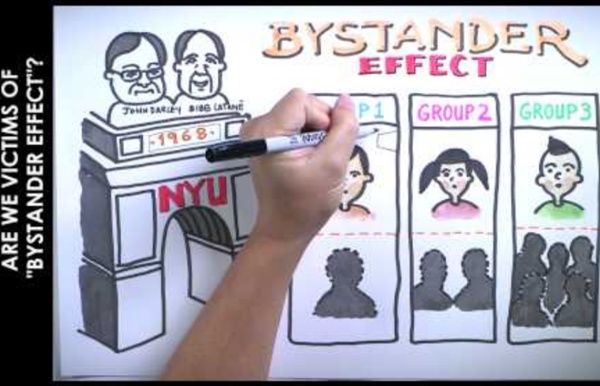 How to Break the Bystander Effect They could have left it to someone else. An Army veteran blocked a shooter in Oregon from entering his classroom. Three friends on a high-speed train from Paris to Amsterdam helped stop a gunman wielding an AK-47. TODAYonline I refer to the news reports of the fatal traffic accident on Sunday (Dec 29) at Lucky Plaza. I applaud the Good Samaritans who unselfishly helped to lift up the car, pulled the victims out and attended to them. These are acts of true heroism. They encourage us to lend help to accident victims when needed and show that there are still compassionate people who don’t respond to accidents by whipping out their phones first to take videos and photos to circulate to their friends. In Sunday’s incident, one of the first things a bystander could do was to rush to the nearby Mount Elizabeth Hospital Accident and Emergency Department to seek help, as it would have the necessary medical equipment and trauma specialists on duty. This was crucial as the Singapore Civil Defence Force ambulances would take some time to arrive and the accident victims needed immediate medical attention and first aid.

An avoidable murder of a student caught on tape: the sickening power of the bystander effect On Sept. 17, the life of a 16-year-old high schooler in Long Island ended tragically in a violent brawl outside a strip mall. Khaseen Morris was told to show up outside the mall at a certain time by several others his age, after he was seen walking home the girlfriend of another boy. Morris showed up and was immediately attacked by a group of five teenagers. A senseless brawl erupted and Morris was stabbed repeatedly in the chest, dying later that night in the hospital.

Singapore bystander CPR rate 'extremely low', Health News SINGAPORE - Wedneday's report ("Motorcyclist, 38, dies in Braddell Road accident") about a 19-year-old student who performed cardiopulmonary resuscitation (CPR) on a road accident victim clearly demonstrates that people are prepared to help others in need and try to save lives. The student's actions should be highly commended. Providing bystander first aid in the form of CPR, using an automated external defibrillator (AED) and trying to stem external bleeding are all forms of positive action meant to save lives. These may not always result in lives saved, but people in cardiac arrest who get prompt bystander CPR are two to three times more likely to survive than those who do not receive such help.

Intervene - CornellCast STUDENT 1: Do you know them? Do you know her? STUDENT 2: Yeah. Khaseen Morris: Teen held for killing that bystanders filmed Image copyright Nassau County Police A New York teenager has been charged with the fatal stabbing of a 16-year-old boy whom bystanders filmed bleeding to death. Tyler Flach, 18, is accused of second-degree murder in the deadly after-school brawl that broke out not far from the victim's Long Island school. Police said that most of the "50, 60, 70" kids who witnessed the attack on Khaseen Morris did nothing to stop it. "That's egregious," said Detective Lt Stephen Fitzpatrick. "Kids stood here and didn't help Khaseen," Lt Fitzpatrick said.

Sexual assault and the bystander effect: Inaction of passers-by is a grave problem which needs to be addressed - India News , Firstpost Why do bystanders often stand and stare instead of helping the victim? Turns out this is a well-documented psychological phenomenon. On 29 April, in Jehanabad, Bihar, a group of men molested a minor girl in broad daylight, while the people who had gathered around the scene did nothing to help her. Man slashed & robbed at Tanglin Halt claims witnesses "did nothing to help" - Mothership.SG - News from Singapore, Asia and around the world A 58-year-old man was recently arrested for his suspected involvement in a case of armed robbery. On Oct. 13, the suspect slashed another man with a fruit knife near Tanglin Halt Road, and managed to get away with the victim's mobile phone as well. The suspect was arrested on the same day and was subsequently charged in court two days after the incident. However, a Facebook post which surfaced recently revealed more details of what had happened that evening. One Kyle Huang Junyuan shared that he was with a group of friends at Tanglin Halt Market on the evening of Oct. 13. They then spotted a blood trail leading to the hawker centre's toilet, and the trail appeared fresh.

This video illustrates the experiment carried by social psychologists Bibb Latané and John Darley in 1968 on the concept of the Bystander Effect. This concept remains relevant in today's modern psychology. by agnestan Sep 22

This video explores another concept as to how the bystander effect is affected when there are more people the lessens the chances and much slower where someone can get help. This concept is termed as diffusion of responsibility. In this case when there were more people in the room and someone needed immediate help, rate of which help was provided slowed down as compared to when there were lesser people or when they are alone. It shows people tend to wait or expect someone else to come forward to help the person in need. However if alone they quite immediately respond and assume the responsibility to offer help/provide assistance. by vengaadesh_rajendran Sep 20

This video has exemplified another factor which contributes to the bystander effect, which is the idea of diffusion of responsibility. This idea indicates that the number of people (i.e. bystanders) who are present during a crisis may affect a person’s response to an individual in need of help (Garcia et al., 2002, p. 843). The greater the number of people who are present during the crisis, the less inclined a person will be to offer help. This is because there is a higher possibility that another bystander will help the individual (Garcia et al., 2002, p. 844), so the person feels less responsible to respond (Walsh, 2014). by sherylgoh001 Mar 21