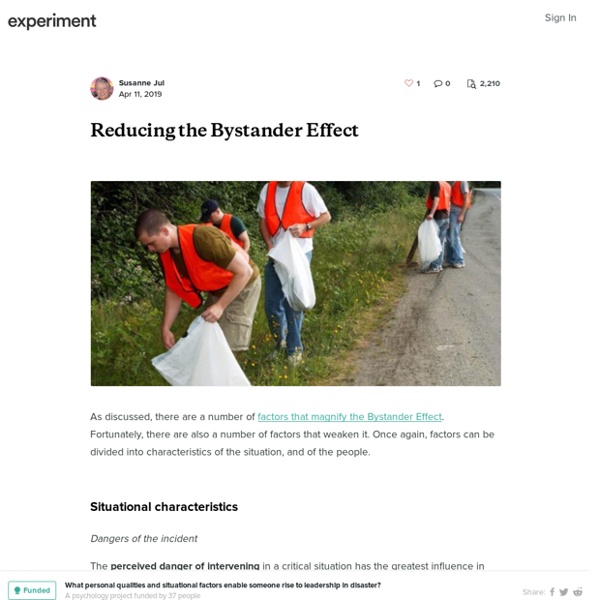 As discussed, there are a number of factors that magnify the Bystander Effect. Fortunately, there are also a number of factors that weaken it. Once again, factors can be divided into characteristics of the situation, and of the people. Situational characteristics Dangers of the incident The perceived danger of intervening in a critical situation has the greatest influence in reducing the Bystander Effect. Several explanations could account for the role of perceived danger. Most fundamentally, the arousal: cost–reward model suggests that taking action is a response to the physiological arousal engendered by a critical situation, and that … bystanders intervene in part because they seek to reduce their own arousal [1] Presumably, bystanders experience stronger arousal the more dangerous they perceive the situation to be, making the reward for intervening—in terms of reducing arousal—correspondingly greater. Bystander behavior Bystander characteristics Competence Sex Age Summary References

What is the Bystander Effect and How Can We Overcome it? - DefibsPlus You may think that you are more likely to receive life-saving care if you experience a Sudden Cardiac Arrest (SCA) in a crowd or busy area – but the opposite is actually true. This is due to the bystander effect; a natural phenomenon where the greater the number of bystanders, the less likely any individual is going to act to provide help. It’s a complex phenomenon but one we actively need to combat in order to support people in distress.

What Is Diffusion Of Responsibility And How Does It Show Up In Real Life? By: Joanna Smykowski Updated February 13, 2020 Medically Reviewed By: Lauren Guilbeault Content/Trigger Warning: Please be advised, the below article might mention trauma-related topics that include sexual assault & violence which could potentially be triggering. How to Break the Bystander Effect They could have left it to someone else. An Army veteran blocked a shooter in Oregon from entering his classroom. Three friends on a high-speed train from Paris to Amsterdam helped stop a gunman wielding an AK-47. This past spring, an Army captain in North Carolina pulled a couple to safety after a fiery car crash.

How to be kinder to strangers in Singapore, Opinion News The Charities Aid Foundation recently released the World Giving Index 2017, which provides insight into the scope and nature of giving around the world. Based on data collected from the Gallup World Poll, the index, which polled 1,000 individuals in each representative country, revealed two surprising facts. Myanmar, Indonesia and Kenya turned out to be among the most charitable countries, even though they have a huge number of their populations living below the poverty line. Being poor does not stop one from being generous. Wealthy countries such as the United States, Canada, New Zealand, Australia and the United Arab Emirates also feature in the top 10.

Oklahoma State University-Oklahoma City Be an intervener! Stop these incidents before they occur, and talk to your friends about it so that they will intervene as well! Our goal is to change the culture on the OSU campus by creating a community of leaders and active bystanders. The in-person 1 is 2 Many Presentation goes over specific examples, training you to become an active bystander. We encourage you to request a presentation so that you can begin making a difference on the OSU campus today! Email studentconduct@osuokc.edu or call 405-945-3378 to book a presentation and read more below.

How to be kinder to strangers in Singapore, Opinion News The Charities Aid Foundation recently released the World Giving Index 2017, which provides insight into the scope and nature of giving around the world. Based on data collected from the Gallup World Poll, the index, which polled 1,000 individuals in each representative country, revealed two surprising facts. Myanmar, Indonesia and Kenya turned out to be among the most charitable countries, even though they have a huge number of their populations living below the poverty line. Being poor does not stop one from being generous. The Bystander Effect and Altruism Learning Objectives Explain the factors that influence human altruism, including reciprocal altruism and diffusion of responsibility. Go to YouTube and search for episodes of “Primetime: What Would You Do?”

Strategies for Effective Helping - Step UP! Program In addition to the 5 Decision Making Steps (Notice the event; Interpret it as a problem; Assume personal responsibility; Know how to help; Implement the help – Step UP!), there are a number of strategies you can use for effective helping. (For action steps in each topic area please go to that specific topic):