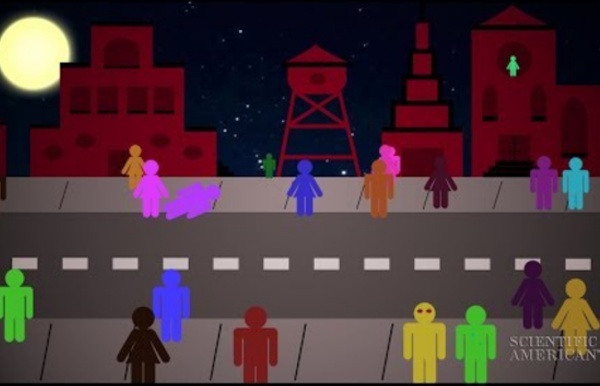 Kitty Genovese (1964) The Kitty Genovese murder in Queens, New York, in 1964 is one of the most famous murder cases to come out of New York City and into the national spotlight. What propelled it wasn’t the crime or the investigation, but the press coverage that alleged the murder had many witnesses who refused to come to the Kitty Genovese’s defense. This has been disproved over time, but not before it became part of the accepted lore of the crime.

Example: George Floyd's Death - Police violence and the ‘bystander effect’ explained Since George Floyd died after police officer Derek Chauvin knelt on his neck for almost nine minutes on May 25, demonstrators across the country have gathered to protest police actions against African Americans. While most of the protests were calm, in several cities police officers have used force against demonstrators and journalists under the justification of crowd control. The sight of officers in riot gear beating marchers, firing rubber bullets and chemical- or pepper-based irritants, and shoving activists has reignited questions about accepted practices in the nation’s law enforcement community. Francesca Gino, Tandon Family Professor of Business Administration at Harvard Business School, studies leadership, the psychology of decision-making, and organizational behavior. She has written about how an organization can develop a culture that can turn harmful to its own people, to the success of its mission, and to its own reputation.

10 Notorious Cases of the Bystander Effect The bystander effect is the somewhat controversial name given to a social psychological phenomenon in cases where individuals do not offer help in an emergency situation when other people are present. The probability of help has in the past been thought to be inversely proportional to the number of bystanders. In other words, the greater the number of bystanders, the less likely it is that any one of them will help. This list describes the prototype of the effect and cites nine particularly heinous examples. The Parable of The Good Samaritan First, the prototype of the bystander effect. How to Break the Bystander Effect They could have left it to someone else. An Army veteran blocked a shooter in Oregon from entering his classroom. Three friends on a high-speed train from Paris to Amsterdam helped stop a gunman wielding an AK-47. This past spring, an Army captain in North Carolina pulled a couple to safety after a fiery car crash.

'Bystander Effect' not exclusive to humans A rat is less likely to help a trapped companion if it is with other rats that aren't helping, according to new research from the University of Chicago that showed the social psychological theory of the "bystander effect" in humans is present in these long-tailed rodents. The study, titled "The Bystander Effect in Rats," also demonstrated that in the presence of other potential helper rats, rats are more, rather than less, likely to help. Whether helping is facilitated or suppressed depends on the circumstances rather than on personal temperament or morals, a finding with implications for human society. The research, published in the July 8 issue of Science Advances, builds off previous research on rat empathy.

This video explains the bystander effect. The video covers the diffusion of responsibility, where bystanders believe that someone else would help, preventing them from intervening in an emergency situation. This is further amplified by the thought that others that are more qualified like doctors will help more than they should, as they don't think their help would be unneeded. The video also explains that we are more aware of our surroundings when we are alone than when around a group of people, resulting in less attention paid to our surroundings. Bystanders are also likely to interpret the situation based on other bystanders' reactions. If others are calm and unbothered, they are likely to conform to others as well. The bystander effect is counteracted when a bystander decides to intervene, either directly or indirectly. The video also discusses the effect of voice bystander effect in the workplace, where diffusion of responsibility can occur when employees share their opinions in confidence with each other resulting in no one voicing out to the upper management. by vrncchin Sep 20

This video explains the Bystander Effect, the diffusion of responsibility where people believe someone else will step in to help instead. Also, worrying that their help will not be needed as there will be more qualified individuals around to help instead. People tend to focus on each other rather than the surroundings due to the social norms on focusing on the people we are with. But when individuals are alone and they see someone in help, they will first scan other people nearby to see if anyone else is reacting, and if they are not, they will believe that it is a non-emergency situation and therefore, will less likely step up to help. Lastly, individuals with medical and self-defense training alongside empathy, knowing the victim personally as well as thinking that the victim deserves help will increase their obligations to intervene. by yqichan001 Sep 19

In this video, it shows about the bystander effect. Explaining the diffusion of responsibility - when there is a lot of people around, unlikely someone will step forward to help due to the mindset that someone out from the crowd will help. Some even have the mentality that they dont have the knowledge and skills to help or the worries that it might worsen the situation. by rosmarianirusli Sep 16

In this video, it talks about the bystander effect. It caused by the diffusion of responsibility and willingness to help. The diffusion of responsibility is when one decides to enter into the situation to help. However, willingness to help will be one would think that the Doctor or the police will have more knowledge to help. Individuals Focus vs Group: Individuals look at others and conform to not help and people in group pays attention to each other. Personal responsibility occurs whether to help before coming into a conclusion. In the workplace, the bystander effects take place with the idea, opinion, and concern. The worker can choose to be a bytsander or report to the managment. by amandang005 Sep 16

As mentioned in the video, one factor which contributes to the bystander effect (Plotner, Over, Carpenter & Tomasello, 2015, p. 499) is what is known as social referencing. This is a process where a person observes the cues of others who are present in the crisis to determine whether to provide help to the individual (Chekroun & Brauer, 2002, p. 855). If other people are not intervening, the person may do the same (Plotner et al., 2015, p. 499-500). This may be done to avoid embarrassment in the event where the circumstance is not an emergency (Chekroun & Brauer, 2002, p. 855). by sherylgoh001 Mar 21