Ways to counteract the Bystander Effect

THE BYSTANDER EFFECT. What Is the Bystander Effect? If you witnessed an emergency happening right before your eyes, you would certainly take some sort of action to help the person in trouble, right?

While we might all like to believe that this is true, psychologists suggest that whether or not you intervene might depend upon the number of other witnesses present. The Bystander Effect. 10 Notorious Cases of the Bystander Effect. What causes the "Bystander Effect"? From Empathy to Apathy: The Bystander Effect Revisited - Ruud Hortensius, Beatrice de Gelder, 2018. When people are asked whether they would spontaneously assist a person in an emergency situation, almost everyone will reply positively.

Although we all imagine ourselves heroes, the fact is that many people refrain from helping in real life, especially when we are aware that other people are present at the scene. In the late 1960s, John M. Darley and Bibb Latané (1968) initiated an extensive research program on this so-called “bystander effect.” ﻿The Bystander Effect in Emergency Situations. Mental Health The Bystander Effect in Emergency Situations By Karen Doll, Psy.D., L.P March 18, 2019. 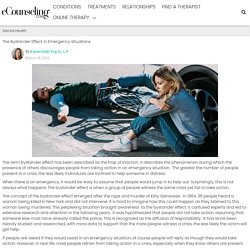 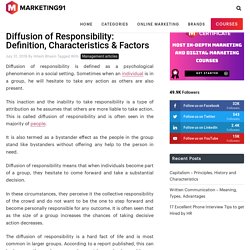 Sometimes when an individual is in a group, he will hesitate to take any action as others are also present. This inaction and the inability to take responsibility is a type of attribution as he assumes that others are more liable to take action. This is called diffusion of responsibility and is often seen in the majority of people. It is also termed as a bystander effect as the people in the group stand like bystanders without offering any help to the person in need. Most In-depth Marketing and Digital Marketing Courses Diffusion of responsibility means that when individuals become part of a group, they hesitate to come forward and take a substantial decision. In these circumstances, they perceive it the collective responsibility of the crowd and do not want to be the one to step forward and become personally responsible for any outcome. What Is Diffusion Of Responsibility And How Does It Show Up In Real Life?

By: Joanna Smykowski Updated February 13, 2020 Medically Reviewed By: Lauren Guilbeault Content/Trigger Warning: Please be advised, the below article might mention trauma-related topics that include sexual assault & violence which could potentially be triggering. 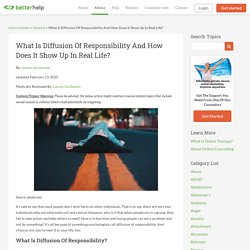 Source: pexels.com It's safe to say that most people don't wish harm on other individuals. Understanding Pluralistic Ignorance in Social Psychology - Psychologenie. (127) The Bystander Effect: Why Some People Act and Others Don't. 17 Exceptional Bystander Effect Statistics. It’s a strange, but true fact: when there’s an emergency situation and there are a lot of bystanders there to witness it, the less likely it is that anyone from the crowd will step into help. 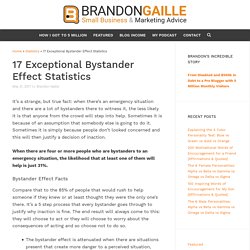 Sometimes it is because of an assumption that somebody else is going to do it. Sometimes it is simply because people don’t looked concerned and this will then justify a decision of inaction. The kindness of strangers: Are good Samaritans the exception or norm? Image copyright Mark Levine If you saw someone being attacked on the street, would you help? 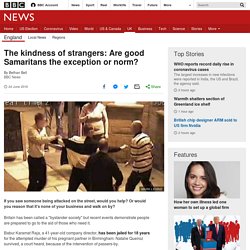 Or would you reason that it's none of your business and walk on by? Britain has been called a "bystander society" but recent events demonstrate people are prepared to go to the aid of those who need it. Babur Karamat Raja, a 41-year-old company director, has been jailed for 18 years for the attempted murder of his pregnant partner in Birmingham. Natalie Queiroz survived, a court heard, because of the intervention of passers-by.

Raja repeatedly stabbed Ms Qeuiroz until two men intervened and wrestled him to the ground. This kindness of strangers has been repeated around the country. Bernard Kenny has been deemed a hero for trying to save MP Jo Cox from a deadly attack in Birstall. Are You a Hero or a Bystander? We all wonder how we would react in an emergency. 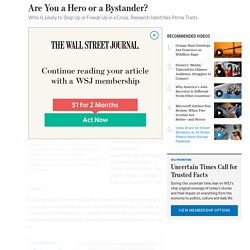 Would we risk our lives to help someone in danger? Laurie Ann Eldridge found out last year. Looking up from her garden one evening at her Cameron, N.Y., home, Ms. Eldridge saw a confused 81-year-old driver stuck at a railroad crossing nearby, oblivious to the train speeding toward her car. Ms. It is hard to know for sure who will step up and who will freeze up in a crisis. WSJ Newsletter. 5 Effective Tips to Overcome the Bystander Effect. Do you know about the bystander effect?

It's a social dynamic that affects almost everyone when an observed conflict is either ignored or worse, reinforced by the failure to act by those observing. What is the Bystander Effect and How Can We Overcome it? - DefibsPlus. You may think that you are more likely to receive life-saving care if you experience a Sudden Cardiac Arrest (SCA) in a crowd or busy area – but the opposite is actually true. 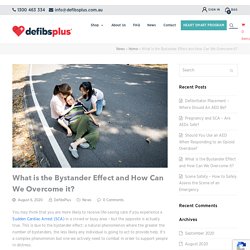 The Modern Bystander Effect. How to Overcome the Bystander Effect. Psychologists have long been interested in exactly why and when we help other people. There has also been a tremendous amount of interest in the reasons why we sometimes don't help others. The bystander effect is a social phenomenon that occurs when people fail to help those in need due to the presence of other people. In many cases, people feel that since there are other people around, surely someone else will leap into action.1 While the bystander effect can have a negative impact on prosocial behavior, altruism and heroism, researchers have identified a number of different factors that can help people overcome this tendency and increase the likelihood that they will engage in helping behaviors.2 Some of these include: Witnessing Helping Behavior Sometimes just seeing other people doing something kind or helpful makes us more willing to help others.

Imagine that you are walking into a large department store. Being Observant Being Skilled and Knowledgeable Guilt. Anticipated Guilt for Not Helping and ... Introduction Imagine that you hear that the blood-supplies are running low in all hospitals in your part of the country. You know that you could help by visiting the nearby donor clinic on your way back from work and donate blood (it would take you around 30 min).

Now imagine a similar situation, but where the donor clinic is located far away (it would take you around 4 h to go there and donate blood). Psychology of the Bystander and tips for increasing chances of receiving help - Fight Times Magazine. If You’re in Danger, Will Bystanders Help? Almost every psychology student knows about Kitty Genovese, the 28-year-old Queens woman who was stabbed to death in 1964. At the time, the New York Times reported that no one had lifted a finger to rescue her.

Though that story was later debunked—some people did call the police or shout down the assailant—Genovese’s death provoked a flurry of research on what’s now called the bystander effect. According to decades of experiments, the more people who are observing someone in trouble, the less likely each person is to help. Today, however, new studies are calling the bystander effect into question—and sketching a somewhat sunnier picture of human nature. Most recently, researchers from the U.K.’s Lancaster University, the University of Copenhagen, and elsewhere captured a series of real-life conflicts on surveillance cameras and found that at least one person in the vicinity came forward to help about 90 percent of the time.