The Bystander Effect vs. The Good Samaritan Effect 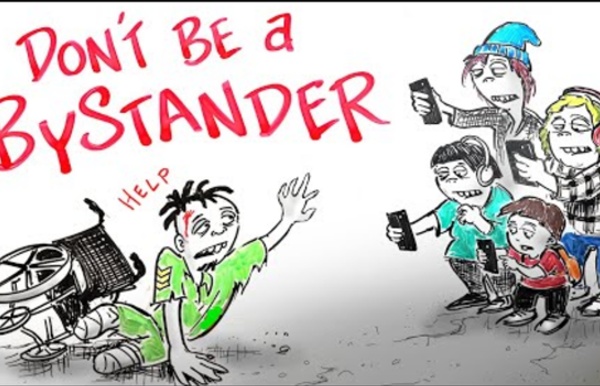 The murder of "Kitty" Genovese that led to the Bystander Effect & the 911 system Catherine “Kitty” Genovese was a 28-year-old woman who was brutally murdered outside of her Queens apartment in New York City on March 13, 1964. Genovese’s attack lasted around 30 minutes as she was stabbed 14 times by a man named Winston Moseley. It was originally reported that there were 38 bystanders who turned their back on Genovese’s early morning cries for help, shutting their doors to silence her screams. Although that judgment was later proven to be inaccurate, the murder was considered the driving force behind our emergency 911 system today and the discovery of the term that so many psychologists are still researching: “The Bystander Effect.”

George Floyd: How race may affect what bystanders can do for detainees Surveillance video in Minneapolis shows the first moments of George Floyd's police interaction. USA TODAY In the videos, they are faceless voices, off camera, trying to intervene. They say things like “get off his neck,” or “he’s a human,” or “he’s dying.” George Floyd, a 46-year-old black man, died Monday when a white Minneapolis police officer knelt on his neck for several minutes after he was detained. It was bystanders – the owners of those voices – who shed light with their viral video recordings of yet another deeply disturbing incident of excessive force levied against a minority in police custody.

Online source on How to Overcome the Bystander Effect Psychologists have long been interested in exactly why and when we help other people. There has also been a tremendous amount of interest in the reasons why we sometimes don't help others. The bystander effect is a social phenomenon that occurs when people fail to help those in need due to the presence of other people. In many cases, people feel that since there are other people around, surely someone else will leap into action.1 While the bystander effect can have a negative impact on prosocial behavior, altruism and heroism, researchers have identified a number of different factors that can help people overcome this tendency and increase the likelihood that they will engage in helping behaviors.2 Some of these include:

How to Break the Bystander Effect They could have left it to someone else. An Army veteran blocked a shooter in Oregon from entering his classroom. Three friends on a high-speed train from Paris to Amsterdam helped stop a gunman wielding an AK-47. This past spring, an Army captain in North Carolina pulled a couple to safety after a fiery car crash. Were these men instinctively courageous, or had they learned to be?

Reducing the Bystander Effect As discussed, there are a number of factors that magnify the Bystander Effect. Fortunately, there are also a number of factors that weaken it. Once again, factors can be divided into characteristics of the situation, and of the people. Situational characteristics Dangers of the incident We Are All Bystanders For more than 40 years, Peggy Kirihara has felt guilty about Stewart. Peggy liked Stewart. They went to high school together.

Pluralistic Ignorance (SOCIAL PSYCHOLOGY) - iResearchNet Pluralistic Ignorance Definition Pluralistic ignorance occurs when people erroneously infer that they feel differently from their peers, even though they are behaving similarly. As one example, imagine the following scenario: You are sitting in a large lecture hall listening to an especially complicated lecture. After many minutes of incomprehensible material, the lecturer pauses and asks if there are any questions.

Certain laws were made to try to counteract the bystander effect, failure to help as a witness can result in fines, lawsuits or in extreme cases, jail time. by belindatam001 Sep 21