HP Photosmart 5520 e-All-in-One and HP Deskjet Ink Advantage 5520 e-All-in-One Printer Series - Apple AirPrint: The Apple Mobile Device Shows the Job is Printing but the Printer Does Not Print. When you try to print from your iPad, iPhone, or iPod Touch to your HP printer using Apple AirPrint, your Apple mobile device shows that the print job is printing, but the print job does not print. 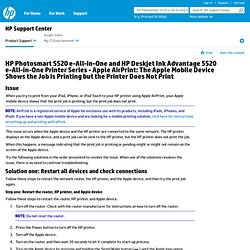 This issue occurs when the Apple device and the HP printer are connected to the same network. The HP printer displays on the Apple device, and a print job can be sent to the HP printer, but the HP printer does not print the job. When this happens, a message indicating that the print job is printing or pending might or might not remain on the screen of the Apple device. Try the following solutions in the order presented to resolve the issue. My hotmail sent items have disappeared. Inbox is ok. How. Anycall_SKT_UM. Internet Privacy and Identity Protection by IdentityCloaker.com! 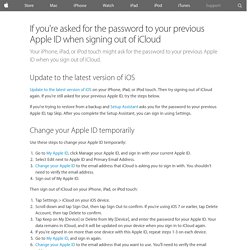 Hotspot Shield. iPhone. Xstreamer. Slingbox. Spotify. How To Watch TV On The Web With BBC iPlayer [Mainly UK Only] The Internet is becoming an increasingly important source for content of all media. 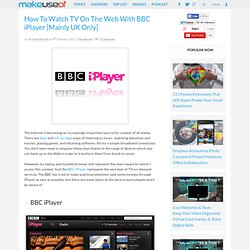 There are legal and not-so-legal ways of listening to music, watching television and movies, playing games, and obtaining software. All via a simple broadband connection. You don’t even need a computer these days thanks to the range of devices which you can hook up to the Web in order to transform them from dumb to smart. However, my laptop and humble browser still represent the main means by which I access this content. And the BBC iPlayer represents the very best of TV-on-demand services. BBC iPlayer Watching directly in a Web browser is only officially allowed in the UK, and simple proxy servers don’t seem to help. There is also a global iPlayer app available for those outside of the UK who are willing to pay to use the service. As a UK resident I’m lucky enough to not to have to deal with that. BBC Recommends.

How to Use FaceTime (iPad, iPhone, iPod, and iOS) Watching UK TV Overseas. A common question we get asked is about the best way to watch UK TV from your house in Turkey. 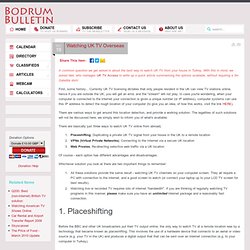 With this in mind, we asked Neil, who manages UK TV Access to write up a quick article summarising the options available, without requiring a 3m Satellite dish! World Electricity Standards. Link to original web page: There is no standard mains voltage throughout the world and also the frequency, i.e. the number of times the current changes direction per second, is not everywhere the same. 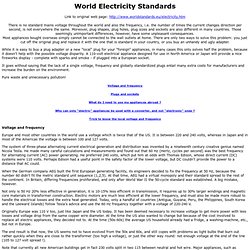 Moreover, plug shapes, plug holes, plug sizes and sockets are also different in many countries. Those seemingly unimportant differences, however, have some unpleasant consequences. Most appliances bought overseas simply cannot be connected to the wall outlets at home. There are only two ways to solve this problem: you just cut off the original plug and replace it with the one that is standard in your country, or you buy an unhandy and ugly adapter.

While it is easy to buy a plug adapter or a new "local" plug for your "foreign" appliances, in many cases this only solves half the problem, because it doesn't help with the possible voltage disparity. Pure waste and unnecessary pollution!

Online shopping. Transfer Music - iPod Touch To iTunes on computer. Tips re Passwords. Your passwords protect your accounts, files, and email, and, by extension, the university's computer system. 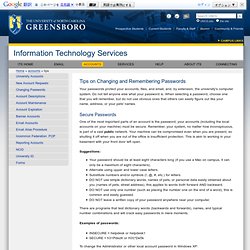 Do not tell anyone else what your password is. When selecting a password, choose one that you will remember, but do not use obvious ones that others can easily figure out like your name, address, or your pets' names. Secure Passwords One of the most important parts of an account is the password; your accounts (including the local accounts on your machine) must be secure. Remember, your system, no matter how inconspicuous, is part of a vast public network. Suggestions: Your password should be at least eight characters long (if you use a Mac on campus, it can only be a maximum of eight characters). There are programs that test dictionary words (backwards and forwards), names, and typical number combinations and will crack easy passwords in mere moments. Examples of passwords: INSECURE = helpdesk or helpdesk1 SECURE = h31PdezK or H3! CNet-tech.news. 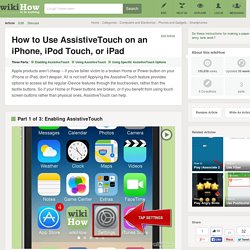 How to Move Your iTunes Library to an External Drive. If you have hundreds upon hundreds of songs in your iTunes* library, plus videos, movies, and e-books, you may find that the original hard drive you downloaded all this to is starting to fill up. 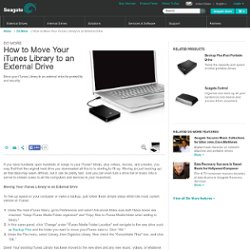 Moving (or just backing up) all that data may seem difficult, but it can be pretty fast. And you can even turn a drive full of music into a server to stream tunes to all the computers and devices in your household. Wireless Plus - How to upload content in iOS. To upload content to the Seagate Wireless Plus drive using an Apple iOS device, please follow this procedure: Launch the Seagate Media app on your Apple iOS device. 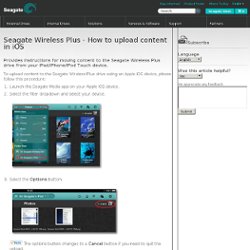 Select the filter dropdown and select your device. Select the Options button. Wireless Plus, Wireless Hard Drive, iPad Hard Drive. Seagate Wireless Plus review - Page 2. Out of the box, the Wireless Plus is preconfigured with a Wi-Fi network and you can connect other Wi-Fi clients (smartphones, computers, tablets) to it. 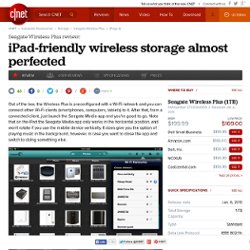 After that, from a connected client, just launch the Seagate Media app and you're good to go. Note that on the iPad the Seagate Media app only works in the horizontal position, and won't rotate if you use the mobile device vertically. How to Transfer Books or PDF Files to iBooks Without iTunes on iPhone and iPad - iOS Hacker. Unlike other apps iBooks is not a stock iOS app and requires users to download it from the App Store where it is available for free. Even though it is not a stock application iBooks still requires users to use iTunes if they want to transfer books or PDF files to it. This can be very annoying at times especially when you don’t have your own computer available or you don’t want to use iTunes for the purpose. How do I authorize my computer for itunes? You know what, F*ck Apple! I have been a loyal customer of Apple and purchased several of their products. I am sick and tired of their convoluted processes for adapting new purchases.

I just recently purchased a new iPhone 5 to replace my 4s. And have had to replace my laptop after dropping the last one accidentally. It has taken me hours of frustration to finally figure out how to transfer my iTunes and back-up my old phone. That's because it is hidden away in the least obvious place you can imagine.