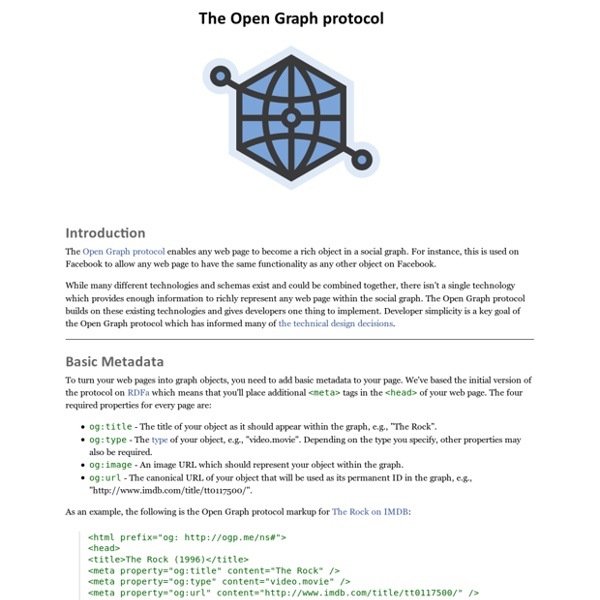 Injecting Open Graph Protocol Content Into your ASP.NET MVC Site : On All Things Web In many social networking sites, pasting a URL from a news site into Facebook or Linked In displays a nice synopsis of that link. The URL pasted into such status box is read, capturing information about the page and it’s specific contents, such as a title,description, thumbnail, etc. One common technique used is to extract the Open Graph Protocol ( markup defined in the header, which is providing the additional metadata. An open graph tag is a meta tag using property names prefixed with “og:”, each page can have its own specific metadata that describes the purpose of that page. I had already created a site without open graph tags,so I began to think of a way to incorporate them with little effort.

microformats dev meetup - San Francisco Details When from to How much Web form do you really need? By ZoomInsights staff Your messaging worked its charm and now that potential lead has found a way onto your website for a white paper, webinar or other product or service. But getting coveted details from potential clients on your landing page can be a slippery slope, and one that’s important to get right. The most common tactic? Facebook friends network mapping: a Gephi tutorial Gephi is a powerful social network modelling tool. It also has the great advantage of simplicity: there is no need of any special skills to use it, except curiosity! This tool is used in a large number of contexts, which is why it took us to heart to propose a guide, fit to a wide audience. We offer a tutorial based on your own data from Facebook, which obviously can be used with various kinds of data!

(Re)defining multimedia journalism Summary: “Snow Fall” was a watershed project, but we’ve already gone beyond that. Let’s focus on innovations in multimedia storytelling techniques. There’s no consensus among journalists about what the term multimedia means, or even whether to use it anymore. ASP.NET MVC: Do You Know Where Your TempData Is? « Greg Shackles I recently discovered that despite the fact that I’d been using the TempData dictionary in my applications, I didn’t really have a full grasp on what it was doing behind the scenes. Of course this meant learning the lesson the hard way once something stopped working like I thought it would. I only really had myself to blame since in the end it was a simple case of RTFM, but it seemed like a good opportunity to dig in and see how TempData really works. What Is TempData? Let’s start by describing what TempData gives you.

RDFa Distiller and Parser This distiller corresponds to the RDFa 1.0 specification. In 2012, W3C has published an updated version of that specification, called RDFa Core 1.1. A new distiller, processing RDFa 1.1 content, has been implemented which suprecedes this one. Note that the new distiller can also process RDFa 1.0 content (there are some minor incompatibilities) if the XHTML+RDFa file uses the right (RDFa 1.0) DTD and/or the @version attribute.

SEO Content for Entrepreneur and Small Business MarketingContent Marketing Explained » SEO Content for Entrepreneur and Small Business Marketing Content Marketing Explained To make your products and services available online, market your business through content marketing. Using personal touches such as including your customers in your websites and blogs will help attract more business. Build a Good Customer Base Finding a creative and interesting way to connect with your visitors is easier said than done. It takes time to develop information that is of service to your customers and create a niche to keep your visitors coming time and time again.

Data for dummies: 6 data-analysis tools anyone can use If you care only about the cutting edge of machine learning and how to manage petabytes of big data, you might want to quit reading now and just come to our Structure:Data conference in March. But if you’re a normal person dealing with mere normal data, you’ll probably want to stick around. Although your data might not be that big or complex, that doesn’t mean it isn’t worth looking at in a new light. With that in mind, here are six of the best free tools I’ve come across for helping we mere mortals analyze our data without having to know too much about, well, anything (I’d keep an eye on the still-under-wraps Datahero, too). I’ve gathered some personal data and tracked down some interesting public data sets to help demonstrate what a novice can do with them. Someone with more skills can certainly do a lot more, and larger datasets will provide greater statistical significance.

Open journalism also means opening up your data, so others can use and improve it The term “open journalism,” which has become a core principle of digital media for forward-thinking outlets such as The Guardian newspaper in Britain, is often used to mean journalism that engages with its audience (or “the people formerly known as the audience” as Jay Rosen calls them) and allows them to contribute to the process. But the idea of opening up journalism is also about what media companies can do beyond just producing articles or facts for people to consume — and a big part of that is opening up the data behind their stories. There are a couple of good examples of this at the Source blog, which is part of the Knight-Mozilla OpenNews project devoted to opening up journalism data. In the first, the New York Times posted all of the data associated with a recent story about the militarization of U.S. police forces — an offshoot of the news story about the shooting of 18-year-old Michael Brown in Ferguson, Mo. — to Github.

Dynamic LINQ (Part 1: Using the LINQ Dynamic Query Library) LINQ (language integrated query) is one of the new features provided with VS 2008 and .NET 3.5. LINQ makes the concept of querying data a first class programming concept in .NET, and enables you to efficiently express queries in your programming language of choice. One of the benefits of LINQ is that it enables you to write type-safe queries in VB and C#. RDFa Distiller and Parser This distiller corresponds to the RDFa 1.0 specification. In 2012, W3C has published an updated version of that specification, called RDFa Core 1.1. A new distiller, processing RDFa 1.1 content, has been implemented which suprecedes this one.