Force Quit Frozen Apps On Your iPad Or iPhone In Two Easy Steps [How-To] Apple is ramping up the prices for its entire Mac lineup in seven countries around the world — but don’t blame Cupertino! Customers in Australia, Brazil, Malaysia, Mexico, New Zealand, Norway, and Thailand will all be paying up to 20 percent more for their MacBook, MacBook Air, MacBook Pro, Mac Pro, and Mac mini devices due to currency fluctuations in the global economy, causing Apple to rethink its prices. Create an iTunes Account without a credit card. iTunes Store offers a large variety of free content, but to download it you have to have an account. 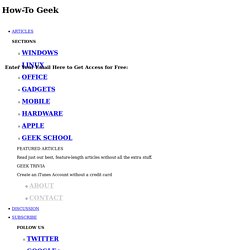 Usually you have to enter your credit card information to sign up, but here’s an easy way to get an iTunes account for free downloads without entering any payment info. Although iTunes Store is known for paid downloads of movies, music, and more, it also has a treasure trove of free media. Some of it, including Podcasts and iTunes U educational content do not require an account to download. 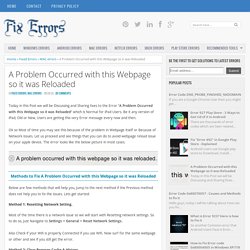 Be it any version of iPad, Old or New, Users are getting this very Error message every now and then. Ok so Most of time you may see this because of the problem in Webpage itself or Because of Network issues. Let us proceed and see things that you can do to avoid webpage reload issue on your apple device. The error looks like the below picture in most cases. Methods to Fix A Problem Occurred with this Webpage so it was Reloaded Below are few methods that will help you, Jump to the next method if the Previous method does not help you to fix the issues. Method 1: Resetting Network Setting. Most of the time there is a network issue so we will start with Resetting network settings. 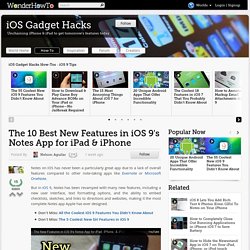 But in iOS 9, Notes has been revamped with many new features, including a new user interface, text formatting options, and the ability to embed checklists, sketches, and links to directions and websites, making it the most complete Notes app Apple has ever designed. 1. New Way to View Notes Viewing your Notes and finding what you're looking for is now easier, thanks to a redesigned UI which includes thumbnails that give a preview of the embedded images, doodles/sketches, and videos contained in your notes. You can view all attachments at once, including photos, videos, sketches, and map and web links, by tapping on the Attachments button at the bottom left. Answered: My iPad Won't Print or Can't Find My Printer. If you have an AirPrint-enabled printer, printing on the iPad is as easy as one-two-three. 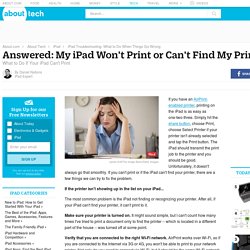 Simply hit the share button, choose Print, choose Select Printer if your printer isn't already selected and tap the Print button. The iPad should transmit the print job to the printer and you should be good. Unfortunately, it doesn't always go that smoothly. If you can't print or if the iPad can't find your printer, there are a few things we can try to fix the problem. If the printer isn't showing up in the list on your iPad... The most common problem is the iPad not finding or recognizing your printer. Make sure your printer is turned on. Verify that you are connected to the right Wi-Fi network. Refresh your Wi-Fi connection. Leave it off for a moment then turn it back on. Reboot the Printer. Reboot the iPad. Verify it is an AirPrint printer.

Troubleshooting a Weak Wi-Fi Signal If the printer is showing up in the list... What printers work with the iPad, iPad 2 & iPad 3? iPads are great fun and have a huge number of Apps that let you get creative and productive. 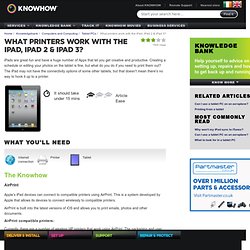 Printing from an iPad without a WiFi...: Apple Support Communities. I have solved this exact requirement by purchasing an HP Photosmart 6520 wireless printer. 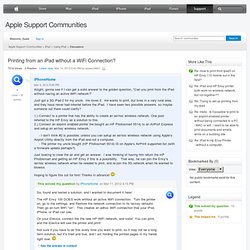 Works like a charm. I have an iPad with 4G cellular, and I have no wireless router for Internet in the house. My only Internet connection is 4G through Verizon cellular. I have no wifi router, hence no wifi network. The HP 6520 has a "Wireless Direct" mode, and the setup guide tells you exactly how to set it up for wireless printer if you have no wireless router. You set up the wireless direct through the touchscreen menu, and the printer publishes its own SSID. The hidden iPad features that may change your life. Buried under general settings is an innocuous little switch that turns on multitasking gestures. This allows you to use several fingers at once to control the iPad. Pinching four or five fingers across the screen will return you to the Home Screen of the iPad from any App. Swiping four or five figures upwards will reveal the multitasking bar, showing which Apps are currently running. Dns-settings-iPad.