Anonymity, Darknets and Staying Out of Federal Custody, Part One: Deep Web 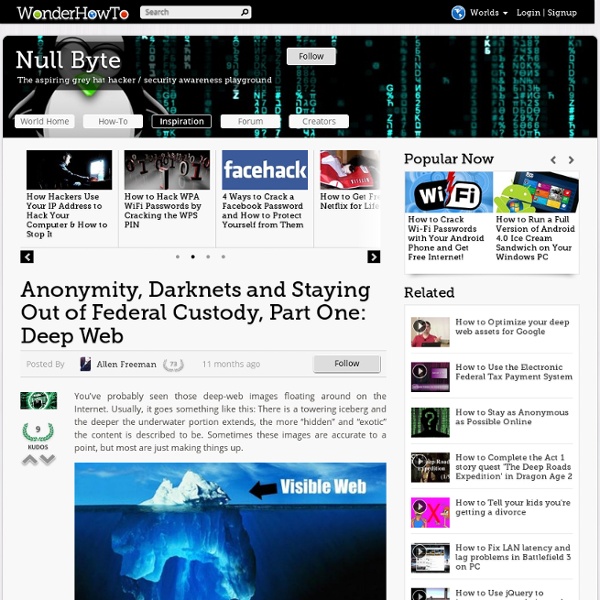 Anonymity, Darknets and Staying Out of Federal Custody, Part One: Deep Web You've probably seen those deep-web images floating around on the Internet. Usually, it goes something like this: There is a towering iceberg and the deeper the underwater portion extends, the more “hidden” and “exotic” the content is described to be. Sometimes these images are accurate to a point, but most are just making things up. So what exactly is 'deep web' then? In this series of articles, I am going to break down the idea of a deep web, what is it, how it got there, and most importantly, how we can use it for our security—maybe even for lulz. Anonymity and Darknets As it stands today, practical knowledge of how darknets (non-indexed portions of the Internet) function will allow you to make more informed decisions regarding risks when rooting a box, hiding files, or communicating securely. The idea is to have enough masking, while maintaining a level of usefulness. First though, we need to talk about Google. Related:  Dark Net • Little Sister Webs

Anonymity, Darknets and Staying Out of Federal Custody, Part Two: Onions and Daggers Anonymity, Darknets and Staying Out of Federal Custody, Part Two: Onions and Daggers In the first part of this series, we learned about darknets, as well as how they came about. But these patches of forgotten Internet are not the oasis of free information you might think. Enter Tor and Onion Routing Simple traffic analysis and deep packet inspection can give up what you are sending, where you are sending it, where it is coming from and who it is going to. Tor works on the idea of onion routing. When you wish to send some data on the network, your node calculates a path though all the running nodes, and wraps your data in that many layers of encryption. The figure below illustrates how each layer of the "test" packet is peeled away one at a time on its way to the web server. Exit Nodes and Escaping Content Filtering Firewalls Inside the Tor network, there is a wide range of hidden content, a lot of which is not for the weak of heart. Why Aren't We All Using Tor Then!? Why Should I Use It? $ .

How to win Rock-paper-scissors every time - StumbleUpon I admit it. When I first heard there are actual tournaments for Rock-paper-scissors, sanctioned by the World Rock Paper Scissors Society, I laughed. I mean seriously, $50k to the winner of a game that requires no skill whatsoever? Rock-paper-scissors isn't just a silly game kids play or a way to decide who has to be the designated driver at parties. Males have a tendency to throw rock on their first try, inexperienced RPS players will subconsciously deliver the item that won previously, and paper is thrown least often, so use it as a surprise. Anonymity, Darknets and Staying Out of Federal Custody, Part Four: The Invisible Internet Anonymity, Darknets and Staying Out of Federal Custody, Part Four: The Invisible Internet In the last article, we left off with the Tor network and its hidden services. As I mentioned, Tor is not the only option in the game, and I want to offer a general introduction to I2P. For a web browsing proxy and hidden services host, Tor gets the job done well. But if you are looking to expand your options for secure communication, then enter I2P! This article will show you how to obtain and set up I2P, and in the process, we will also configure an IRC client to access the IRC2P network and get you up and running. Invisible Internet and Onion Routing I2P initially began in 2003 as a proposed modification to Freenet. Content sent over I2P is encrypted through three-layer garlic encryption, used to verify the delivery of the message to the recipient. Step 1 Download I2P Let's start with a visit to the download page to grab the Windows binary or source code, if needed. Step 2 Start the I2P Router tl;dr

Smart tips to make life easier - StumbleUpon Posted on February 24, 2012 in Humor If you’re new here, you may want to subscribe to our RSS feed or follow us on Facebook or Twitter . Thanks for visiting! Rate this Post (16 votes, average: 5.00 out of 5) Loading... So... Anonymity, Darknets and Staying Out of Federal Custody, Part Three: Hidden Services Anonymity, Darknets and Staying Out of Federal Custody, Part Three: Hidden Services For a moment, picture a situation where you want to host some files or images, but you do not want it traced back to you. Perhaps you're working on a project with others and need secure data storage. Anonymity is the new shield of the 21st century—and you best protect yourself. As always here at Null Byte, we are trying to make that happen. Before someone can learn how to root a box, they need to learn how not to be found. In the last article, we spent some time going over the concepts of onion routing and how it can be useful to you. Tor Hidden Services A Tor hidden service is simply a web server that runs locally and only takes requests from inside the Tor network. Due to the nature of hidden services being anonymous to a degree, the content can be extreme. Setting Up Your Own Hidden Service If you have gotten this far in my series, you are probably interested in setting up your own service. $ sudo . Tip

11 cheap gifts guaranteed to impress science geeks | DVICE - StumbleUpon Science comes up with a lot of awesome stuff, and you don't need a Ph.D, a secret lab, or government funding to get your hands on some of the coolest discoveries. We've got a list of 11 mostly affordable gifts that are guaranteed to blow your mind, whether or not you're a science geek. Click on any image to see it enlarged. 1. Also known as frozen smoke, Aerogel is the world's lowest density solid, clocking in at 96% air. Aerogel isn't just neat, it's useful. Price: $35 2. Inside these sealed glass balls live shrimp, algae, and bacteria, all swimming around in filtered seawater. EcoSpheres came out of research looking at ways to develop self-contained ecosystems for long duration space travel. Price: $80 3. NASA has been trying to figure out how to get a sample of rock back from Mars for a while now. Every once in a while, a meteorite smashes into Mars hard enough to eject some rocks out into orbit around the sun. Price: $70+ 4. Price: $150 5. So what's next year's new color going to be? 6.

Tor vs. I2P: The Great Onion Debate Tor vs. I2P: The Great Onion Debate In my recent Darknet series, I attempted to connect the dots on the Deep Web. I covered the two largest anonymity networks on the Internet today, Tor and I2P. With this article, I am going answer those questions and better explain the pros and cons of each, breaking down the networks, pitfalls, and things you should know to be safe. Back to Onions Tor and I2P are both anonymizing networks, allowing people to tunnel out of their open and non-secure environments. As a quick recap, onion routing involves wrapping your packets in multiple layers of encryption, in a system where each router that passes it along only has the key to decrypt its layer and none of the others. Tor Tor has been around quite a while longer then I2P. The only reason anyone would be changing the I2P config would be to set up port forwarding, and that's a bit out of this article's scope (though a great idea for a future one). I2P was designed with the internal network in mind.

GLOBALIZATION: The Sociology of Humor and Laughter Some people might like to call social globalization "Americanization". The English and Americans have a shared sense of humor as shown in the shared popularity of Gilbert and Sullivan. The Spaniards have a good sense of humor, but not the Russians. At the other extreme are those people who have no sense of humor and who look blank when you tell a joke. Sherlock Holmes and Dr. Several hours later, Holmes awoke and nudged his faithful friend, Watson. "Look at the sky and tell me what you see." Watson answered: "I see millions and millions of stars." "And what does that tell you?" Watson thought a minute and answered: "Astronomically, that tells me that there are potentially billions of planets. Holmes was quiet for a minute and then said: "Watson, you are an idiot. My threat: Any WAISer who does not laugh will be kept in the WAIS attic.

Anonymity Networks. Don't use one, use all of them! Introduction The 3 major anonymity networks on the Internet are Tor/Onionland, I2P and Freenet. If you feel confused on which one is the "best" one to use the answer is simple. Use all three! Each anonymity network is designed for a different specific purpose. One network alone cannot do what the three can do together. Tor/Onionland Tor is an anonymous Internet proxy. Onionland uses the same method to connect to machine identified by a cryptographic public key. Positive Parts of Tor/Onionland: Written In C, that means that it is fast and generally low memory usage.Very easy and simple user interface. Negative Parts of Tor/Onionland: Written in C. The best use for Tor is anonymous proxying to the regular Internet. FreeNet Freenet is an anonymous data publishing Network and is very different from Tor and I2P. Freenet is a big truck you dump stuff on while I2P is a series of Tubes. Freenet uses UDP and is the "oldest" of the 3 Networks. Positive Parts of FreeNet: Negative Parts of Freenet: See Also