NSA surveillance: how to stay secure 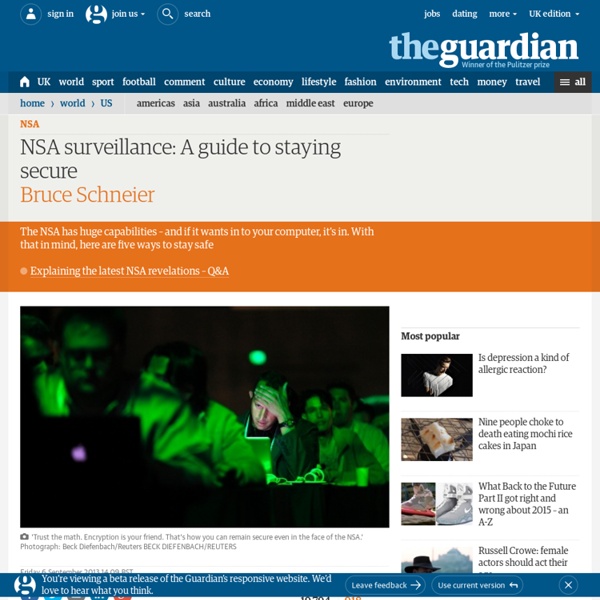 Now that we have enough details about how the NSA eavesdrops on the internet, including today's disclosures of the NSA's deliberate weakening of cryptographic systems, we can finally start to figure out how to protect ourselves. For the past two weeks, I have been working with the Guardian on NSA stories, and have read hundreds of top-secret NSA documents provided by whistleblower Edward Snowden. I wasn't part of today's story – it was in process well before I showed up – but everything I read confirms what the Guardian is reporting. At this point, I feel I can provide some advice for keeping secure against such an adversary. The primary way the NSA eavesdrops on internet communications is in the network. Leveraging its secret agreements with telecommunications companies – all the US and UK ones, and many other "partners" around the world – the NSA gets access to the communications trunks that move internet traffic. TAO also hacks into computers to recover long-term keys. Trust the math. Related:  Informatique

The 6 Most Humiliating Public Failures by Celebrity Psychics The frustrating thing about psychics, mediums, and fortune tellers is that they're still able to make a pretty goddamned comfortable living, even in 2013. Their inability to provide empirical evidence that what they do is anything other than a scam to prey on the gullible seems to have had little effect on their bottom line. Still, there have been little victories along the way, and cameras have been there to capture the hilarity. #6. Richard Nelson/Photos.com Contrary to what you might assume, the people most hostile to claims of supernatural powers are magicians. Gareth Cattermole/Getty Images"Let the naivete flow through you." If you're too young to remember, Geller found fame with mind-reading tricks and, more famously, mind-powered spoon bending. With this in mind, Carson surprised Geller on the show by presenting a table full of assorted spoons and knickknacks, rather than letting him bring his own props, and gave Geller free reign to pick whatever trick he wanted to perform. #5.

Bruce Schneier: Prosecuting Snowden -- "I believe that history will hail Snowden as a hero -- his whistle-blowing exposed a surveillance state and a secrecy machine run amok. I'm less optimistic of how the present day will treat him" via reddit.com Recycle a Bicycle Into an Elevator There's repurposing, and then there's repurposing like a BOSS. That pretty much sums up the ecological efforts of treehouse builder and eco-icon Ethan Schlussler. The Sandpoint, Idaho, resident says he's in the process of finishing construction on a treehouse he built 30 feet in the air. Wanting to devise a way to save himself from "climbing a ladder six and a half million times a day," Schlussler came up with a brilliant way to save himself the trouble. Using an old bike, he rigged a system of pulleys to it, effectively turning it into a pedal-powered elevator. The process also required that Schussler modify the old cycle, cutting off the large sprocket in the front and welding it on the rear gear. MakeZine reports Schlussler's one-person treehouse is almost complete, "I will be building walls and insulating it in the next few weeks, and eventually I intend to live (or at least sleep) in it."

Cybook Gen3 Tips and Troubleshooting Here is where to go to find help with your Bookeen Cybook Gen3. [edit] Tips [edit] User's Manual Download the User's Manual [edit] Contact Address: Bookeen, 6 rue du Tage, 75013 Paris, France Phone number: 0033 1 45654256 Email: support@bookeen.com [edit] Firmware Versions You can check your firmware build number by going to the library view, opening the menu, click on Advanced, click on About. [edit] 1.0 Build 476 Build 476 was the first 1.0 firmware when the CyBook Gen3 became available for ordering at the end of October 2007. delphidb96 reported testing the 1.00 firmware with his pre-production CyBook Gen3 on 31st October 2007. [edit] 1.0 Build 538 Build 538 was released ca. To get build 538 you had to write to Bookeen and ask for it. [edit] 1.0 Build 674 Build 674 came installed on the new version CyBook Gen3 with 512MB internal memory, which appeared in early May 2008. [edit] 1.0 Build 681 Build 681 also came installed on some of the new version CyBook Gen3s with 512MB internal memory.

Surveillance as a Business Model Google recently announced that it would start including individual users' names and photos in some ads. This means that if you rate some product positively, your friends may see ads for that product with your name and photo attached—without your knowledge or consent. Meanwhile, Facebook is eliminating a feature that allowed people to retain some portions of their anonymity on its website. These changes come on the heels of Google's move to explore replacing tracking cookies with something that users have even less control over. Microsoft is doing something similar by developing its own tracking technology. More generally, lots of companies are evading the "Do Not Track" rules, meant to give users a say in whether companies track them. It shouldn't come as a surprise that big technology companies are tracking us on the Internet even more aggressively than before. If these features don't sound particularly beneficial to you, it's because you're not the customer of any of these companies.

Invisible forms of renewable energy One of the ongoing objections wind power, Britain’s most promising form of renewable energy, is that it is unsightly and ruins views. I kind of like wind turbines, I think they’re rather graceful, but I appreciate that others don’t. Offshore wind turbines suffer from the same problem, except that they ruin sea views instead of landscapes. Some don’t like solar panels either, especially on older buildings. So that got me thinking – are there any invisible forms of renewable energy? I’m sure there are more, but here are the first four that came to mind: 1. 2. 3. 4. We can’t restrict ourselves to these invisible technologies of course, but not all renewable energy is an aesthetic blight. Like this: Like Loading...

HFSExplorer Latest version: 0.23 (Jan 9, 2015) [changelog]: Requirements: A Java SE Runtime Environment (version 5.0 or greater). For discussions, please use the mailing list, or optionally the sourceforge forum. What is HFSExplorer? HFSExplorer is an application that can read Mac-formatted hard disks and disk images. HFSExplorer allows you to browse your Mac volumes with a graphical file system browser, extract files (copy to hard disk), view detailed information about the volume and create disk images from the volume. You may be interested in the application if you're: A user of an Intel Mac running Windows with Boot Camp in need of accessing the files on the Mac OS X hard drive. HFSExplorer is written mostly in Java 5, optionally using some Java 6 / 7 features, with some Windows-specific parts written in C in order to be able to get raw access to block devices, and to create a practical launcher application. Installing Usage All users will have the File menu item: Load file system from file