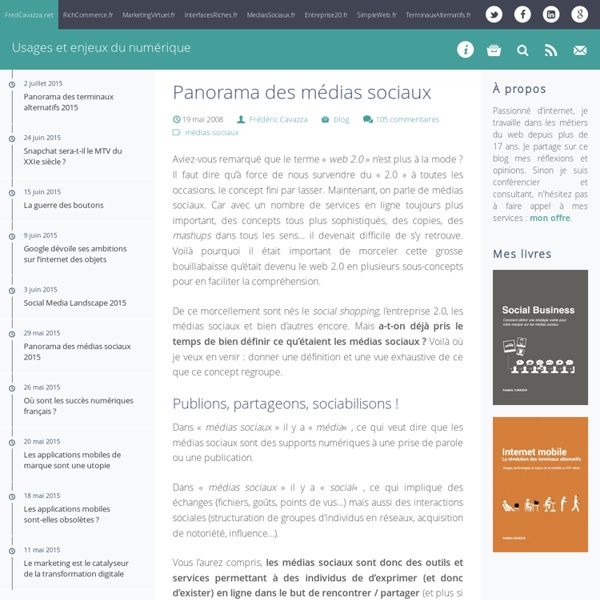 TripIt ! Cookies must be enabled. Please modify your browser settings so we can remember you when you visit TripIt. After cookies are enabled, please refresh the page. Show me how. Internet Explorer 6/7 Click on Tools - Internet Options. Social Media Landscape Did you notice that the « Web 2.0 » term was outdated? One can say that after months (years?) of overselling the « 2.0” » stuff, it begins to fade. Basics of Video Basics of Video Analog video is represented as a continuous (time varying) signal. Digital video is represented as a sequence of digital images. Types of Color Video Signals Component video -- each primary is sent as a separate video signal. The primaries can either be RGB or a luminance-chrominance transformation of them (e.g., YIQ, YUV).

The Impact of Social Media on Travel and Vacation Planning Social media’s increasing influence on our daily lives has rapidly extended into the ways we get away. From planning a vacation with social media to posting reviews of our trips upon our return, there’s no denying social media’s impact on travel today. To demonstrate how more and more people are using social media and mobile technology throughout their vacations, MDG Advertising developed the following informative infographic. The infographic opens by showing how 52 percent of travelers use social media to find vacation inspiration, with 29 percent of respondents flocking to Facebook for travel planning ideas, followed by 14 percent getting inspired by TripAdvisor’s vacation- planning insight. Next, the infographic explains how an abundance of Americans take social media along on their vacations.

Infographic: 5 Companies That Are Rocking Social Media This infographic was created by Voltier Digital, a content marketing agency based in Florida, specializing on the creation and promotion of impactful content marketing campaigns for businesses of all sizes. We all know the usual names of companies that are doing well in social media. I thought it might be interesting to take a look at some of the lesser-knowns and why they've had success, either on an ongoing basis or with some one-off efforts that stood out. And since infographics are all the rage, what better way to look at them? Lost Experience ABC Entertainment's senior vice president of marketing, Mike Benson, described the game as a hybrid between content and marketing. This type of marketing was previously used by ABC for Lost's premiere in 2004. ABC created a website for the fictional Oceanic Airlines, the airline of the plane that crashed in the show's pilot episode.[6]

The 625/50 PAL Video Signal and TV Compatible Graphics Modes A regular PAL tv set can be thought of as a low resolution fixed-frequency monitor. Usually, the PAL video characteristics are as follows: So, basically there are 625 scanlines per one video frame, divided up to two 312.5-line interlaced fields. Each scanline has a duration of 64 µs. Tumblr Office Tour Daniel Goodman / Business Insider Here is the office of Tumblr, the super fast growing blogging platform that may be inspiring Facebook and has big plans for the future. We had to see where the magic happens. The Tumblr office is on E 21 St. and that building in the background is actually home to Business Insider. Tumblr splits its office between two floors. The top one is where most of the staff works.

The Da Vinci Code WebQuests Original Official Promotional WebQuests[edit] The original Da Vinci Code web quest challenges were first made available via the website of the book's author, Dan Brown, as part of a promotional campaign, and both remain hosted on the publisher's website (RandomHouse.com). In January 2004, it was announced on the live television program Good Morning America that hundreds of thousands of people had participated in the original challenge, and that 40,000 people had successfully completed it. Though the official "prize" was given out at that time, the web versions of the quests were never closed, and have remained active ever since. The original version [1] involved deciphering a series of cryptic clues at the publisher's website. Those wishing to solve the quests were required to examine the U.S. version of the book's dustcover jacket, and to search the web to learn the answers to certain questions or clues.

Brief Description of Video and Image Formats Digital Video D1 - is a component format. The extremely high cost of D1 recorders limits their use to only the very elite production facilities that incorporate many special effects with multiple layering of the video signal. Such special effects layering does not degrade the image quality in the pure D1 digital environment.

About Us — Seomra Sproai Seomra Spraoi is a collective that came together in 2004 to set up a radical social centre in Dublin. This idea is an attempt to rebuild some of the things that have been lost to us in the modern world: the sense of community, an atmosphere of tolerance and respect, a safe and secure environment and a non-commercial space for political, arts, cultural, community and other events. It’s a space where you don't feel like you need to buy a cup of over-priced coffee just to sit and relax for a while. What is a social centre? This is a gathering space without a profit motive. It can be a focal point for social movements, and a resource centre for people who are trying to make the world a better place.