How to live longer: 14 health tips from the science expert who really knows. Tips on How to Prevent Mosquito Bites. June 07, 2003 | 75,766 views Share Mosquitoes are not only a nuisance--their bites can cause serious complications including the transmission of diseases such as malaria, yellow fever, encephalitis, and West Nile virus (WN) to humans and animals. 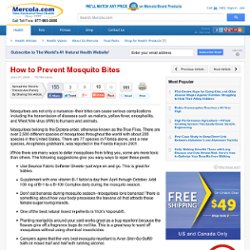 Mosquitoes belong to the Diptera order, otherwise known as the True Flies. There are over 2,500 different species of mosquitoes throughout the world with about 200 species in the United States. There are 77 species in Florida alone, and a new species, Anopheles grabhamii, was reported in the Florida Keys in 2001. Quotes About Aging Gracefully (24 quotes) “I don’t ever remember being afraid of “oldness”. 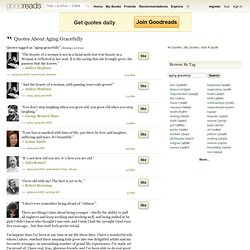 There are things I miss about being younger - chiefly the ability to pull all-nighters and keep working and working well; and being smiled at by girls I didn’t know who thought I was cute; and I wish I had the eyesight I had even five years ago… but that stuff feels pretty trivial. Healthy Aging: 10 Tips For Growing Old Gracefully. In the last two decades, people have not only been living longer but they also have been staying much healthier later in life, according to a recently released study. 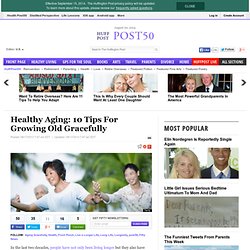 Previously, researchers found that very poor health usually hits people in the last several years of life. But now, thanks in large part to medical advances, poor health is more likely to occur only just before death. So what can you do to make sure you are among those who live longer, healthier lives? We asked Peggy Buchanan, coordinator of vitality/wellness programming for Front Porch, this question. (Front Porch is a large not-for-profit provider of retirement living communities in southern California.) 1. 2. 3. 4. 5. 6. 7. 8. 9. Exercise and Chiropractic Therapy. Cardiovascular and strengthening exercises combined with chiropractic care are important in the management of low back pain.8 If a patient has a history of heart problems, it is important for the patient to consult with not only the doctor of chiropractic but their primary care physician to be certain that they can tolerate cardiovascular fitness-promoting activities. 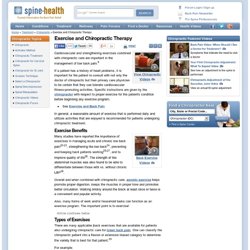 Specific instructions are given by the chiropractor with respect to proper exercise for the patient's condition before beginning any exercise program. See Exercise and Back Pain In general, a reasonable amount of exercise that is performed daily and utilizes activities that are enjoyed is recommended for patients undergoing chiropractic treatment. Herniated Disk in the Lower Back. Copyright 2012 American Academy of Orthopaedic Surgeons Herniated Disk in the Lower Back Sometimes called a slipped or ruptured disk, a herniated disk most often occurs in your lower back. 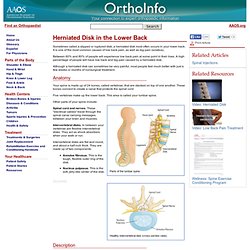 It is one of the most common causes of low back pain, as well as leg pain (sciatica). The Moderate Drinking Cheat Sheet. Simple Preventives on How to Avoid Mosquito Bites. Greater Trochanteric Pain Syndrome. Thigh/Leg Muscle Pain. Greater trochanteric pain syndrome is a condition that causes pain over the outside of your upper thigh (or thighs). 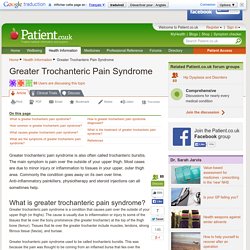 It is a common condition. Causes of greater trochanteric pain syndrome include:

Sleep. 11 Foods To Cure Illnesses. 50 Life Secrets and Tips. Memorize something everyday.Not only will this leave your brain sharp and your memory functioning, you will also have a huge library of quotes to bust out at any moment. 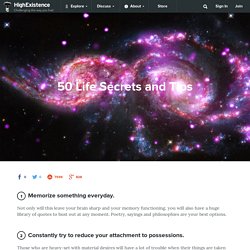 Poetry, sayings and philosophies are your best options.Constantly try to reduce your attachment to possessions.Those who are heavy-set with material desires will have a lot of trouble when their things are taken away from them or lost. Possessions do end up owning you, not the other way around. Drowning in commitments? It's time to stop giving a damn.

If you’re like me, you’ve been caring too much about too many things for too long. 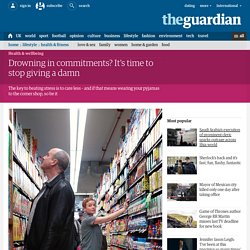 You’re overextended and overburdened by life. Stressed out, anxious, maybe even panic-stricken about your commitments. I was almost 30 years old when I began to realise it was possible to stop caring so much, but I was nearly 40 before I figured out how to make it happen. As a self-described overachieving perfectionist, I was anxious throughout my childhood and adolescence. I tackled numerous projects, tasks and tests to prove myself worthy of respect and admiration from my family, friends and even casual acquaintances.