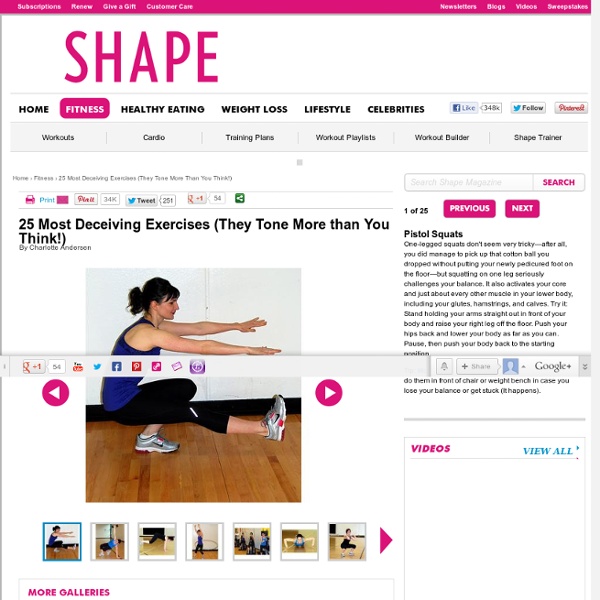 One-legged squats don't seem very tricky—after all, you did manage to pick up that cotton ball you dropped without putting your newly pedicured foot on the floor—but squatting on one leg seriously challenges your balance. It also activates your core and just about every other muscle in your lower body, including your glutes, hamstrings, and calves. Try it: Stand holding your arms straight out in front of your body and raise your right leg off the floor. Push your hips back and lower your body as far as you can. Pause, then push your body back to the starting position. Tip: Modify this move by using a resistance band or do them in front of chair or weight bench in case you lose your balance or get stuck (It happens). You can use your keyboard to see the next slide ( ← previous, → next) Promo Subtitle Image Alt Text 25 Most Deceiving Exercises (They Tone More than You Think!) Title Text Media Folder: Media Root By Charlotte Andersen 44009 shared this

Fitness Advice, Workout Videos, Health & Fitness Hi BodyRockers, Today Freddy and I are starting to pack for our move and we are crazy busy. With everything that we have to do today, I didn’t have time for a full workout, but don’t worry because I put together this savage little 6 minute full body routine that will rock you out. I think that it is always better to do something than to skip your training completely, and this workout may come in a small package, but as you can see in the video, if you are pushing it at your max effort – full throttle – you won’t have anything left after 6 minutes. This is a perfect solution if you find yourself really busy and pressed for time – and you can also extend the torture by doing this 2 times back to back. As I said tho, the real test of your effort is that by the end of the 6 minutes you should be tapped out.

Tighten and Tone Your Abs - Bikini-Belly Bootcamp Warmer weather means less clothing—making spring the perfect time to start getting your abs in shape for summer! Certified personal trainer Jessica Smith, star of the “10 Pounds DOWN: Cardio Abs” DVD, designed this effective workout routine with targeted strength moves to help you develop a strong, flat stomach and cardio bursts to blast away that extra layer of belly fat. How it works: Do this workout on three or four nonconsecutive days per week. And be sure to maintain a healthy diet for best bikini-belly results. 201 Ways to Arouse Your Creativity Arouse your creativity Electric flesh-arrows … traversing the body. A rainbow of color strikes the eyelids.

Why women think they are fat: brain 'thinks body is two thirds bigger than it is' - Health & Beauty, Lifestyle Heidi Blake – 15 June 2010 10:23 AM Scientists have discovered that the body image a person projects in their own brain is “massively distorted” and can be up to two thirds wider than it is in reality. The brain’s own “body model” is also around a third shorter than the body actually is, according to the study at University College London.

How To Lose Belly Fat Fast For Teenagers First, some facts about teen girls and belly fat. The normal, or healthy, percentage of body fat actually increases for girls as they enter their teens. So it's not unusual for a previously angular or "boyish" figure to become more rounded. It's also not unusual for girls to "thicken" a little in their middles prior to growth spurts. Think of it as a piece of elastic getting thinner as it gets longer. Finally, if a teen girl is carrying too much fat, one month isn't much time to take it off, as the recommended healthy weight-loss rate is between 1 and 2 pounds per week.

Scientists capture the first image of memories being made The ability to learn and to establish new memories is essential to our daily existence and identity; enabling us to navigate through the world. A new study by researchers at the Montreal Neurological Institute and Hospital (The Neuro), McGill University and University of California, Los Angeles has captured an image for the first time of a mechanism, specifically protein translation, which underlies long-term memory formation. The finding provides the first visual evidence that when a new memory is formed new proteins are made locally at the synapse - the connection between nerve cells - increasing the strength of the synaptic connection and reinforcing the memory. The study published in Science, is important for understanding how memory traces are created and the ability to monitor it in real time will allow a detailed understanding of how memories are formed. (Photo Credit: Science)

25 Things I Want To Say To So-Called “Aspiring” Writers Seen a lot of folks giving advice to so-called “aspiring” writers these days, so, I figured what the hell? Might as well throw my dubious nuggets of wisdom into the stew. See if any of this tastes right to you. 1. A great tip is an awesome thing. Whether it's an undiscovered restaurant, a sleeper stock, or a Sure Thing in the late double at Pimlico, savvy inside info imbues a man with confidence. Control. Strength. Knowledge is power, baby. It's also the secret to a powerful body, as you're about to find out.