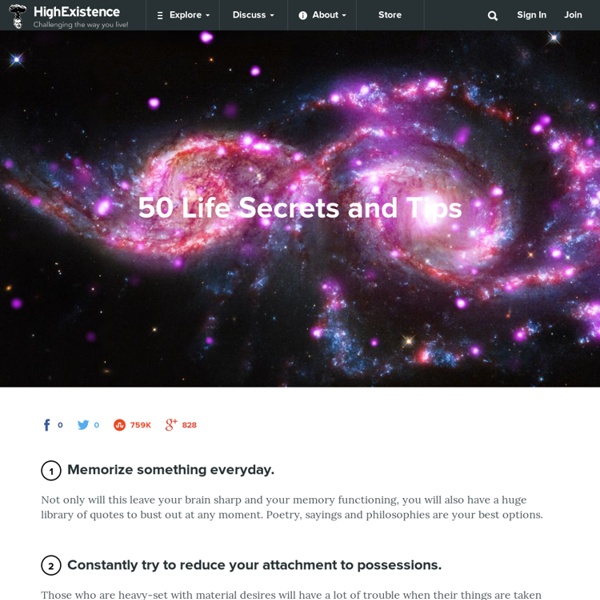 Memorize something everyday.Not only will this leave your brain sharp and your memory functioning, you will also have a huge library of quotes to bust out at any moment. Poetry, sayings and philosophies are your best options.Constantly try to reduce your attachment to possessions.Those who are heavy-set with material desires will have a lot of trouble when their things are taken away from them or lost. Possessions do end up owning you, not the other way around. Become a person of minimal needs and you will be much more content.Develop an endless curiosity about this world.Become an explorer and view the world as your jungle. Stop and observe all of the little things as completely unique events. Try new things. Read “Zen and the Art of Happiness” by Chris Prentiss.This book will give you the knowledge and instruction to be happy at all times regardless of the circumstances.

The Meaning of Life (or, What's it all about?) Now available in Spanish! (Traduccin de hsu - midipaj@arrakis.es ) 10 simple habits to improve self-esteem Low self-esteem is like driving through life with your handbreak on. – Maxwell Maltz There are tons of articles out there claiming capability to change your life for the better, but the truth is that it’s completely up to you. Or not. Let me paraphrase that.

Sankhyakarika The miracle of a perpetually dynamic Universe is enabled when two opposing factors in an interactive state occur simultaneously. Compression and expansion are two opposing activities but when it takes place simultaneously, activity time is conserved and the dynamic state continues. The theoretical clue, lacking in Physics and Cosmology is the numerical algorithm that defines the threshold of simultaneously interactive states, which is also the key to gravitation phenomena. Newtons gravity constant and the fine structure constant are an approximation of precise axiomatic ratios that governs all phenomena in the Universe. Such an interactive activity among the sea of components in space is called a Vriti or vortex in Sanskrit and can be visualised as shown in the adjacent diagram. It is the most exotic process of interaction where dynamic space and cyclic time parameters are conserved totally at every instant.

Animal Totems S - U - Pathways What follows is an alphabetical listing of animals and their symbolism, from the letter S through the letter U. Salamander / Newt - A symbol of patience. When a salamander appears in a dream or meditation , it teaches you how to use your inspiration and dreams to make your goals happen. As a totem or power animal, the salamander aids in transformation, internal and external. The far future of humans and intelligence in the universe — episodes with Ray Kurzweil Closer to Truth | Ray is a world-renowned inventor, computer scientist, innovative futurist and best-selling author. He founded four technology companies based on his revolutionary inventions in artificial intelligence, including reading machines for the blind, speech recognition, and music synthesis. Ray was the principal developer of the first omni-font optical character recognition, the first print-to-speech reading machine for the blind, the first CCD flat-bed scanner, the first text-to-speech synthesizer, the first music synthesizer capable of recreating the grand piano and other orchestral instruments, and the first commercially marketed large vocabulary speech recognition. He has successfully founded, developed, and sold four AI businesses in OCR, music synthesis, speech recognition, and reading technology.

7 Basic Things You Won't Believe You're All Doing Wrong If you're like us, you might sometimes have a problem with complex tasks, like trying to drive an ambulance and send a text message at the same time. But hey, at least most of us have figured out the simplest things that get us through the day, right? Except, you know, some of the simple things we've done every day of our lives, like ... What could be simpler than taking a good crap? 25 Great Motivational Quotes You've Never Heard Of inShare66 63Probably my most read post ever was the 20 Greatest Motivational Quotes of All Time. So much so that I expanded the post and wrote a book with the 50 greatest quotes in that is now sent free to my new newsletter subscribers. Sign up in the box on the left if you want a copy. As I was trawling some quotes the other day it struck me how many amazing ones there were that I’d never heard before and I thought it would be cool to collate the best for your perusal.

Can't Stand Meditation? This Technique is For You. A consistent meditation practice is a struggle for even the most experienced of meditators. For some reason it’s difficult to bring yourself to sit down and quiet the mind despite knowing that it’s the best thing for you. I was talking about this phenomenon with my good friend Phil Drolet of The Feel Good Lifestyle and he replied with a novel solution. “When you go to the gym, do you just do bench press the entire time?”Tweet