Welcome to Linux From Scratch! 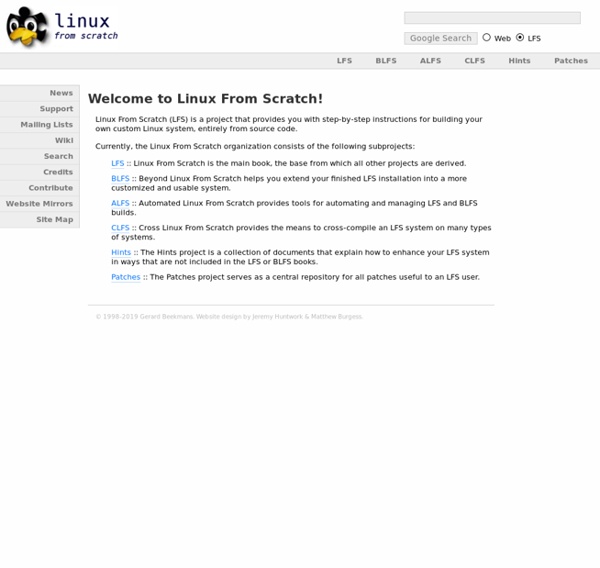 Samba In Ubuntu Linux – Adding Samba Users » Liberian Geek This is the second post of our series about installing, configuring and managing Samba in Ubuntu Linux. The first post can be found here. In this post, we’re going to show you how to add Samba user so that the user can access shares on Ubuntu or Linux machine from a remote computer.

An A-Z Index of the Bash command line for Linux Commands marked • are bash built-ins Many commands particularly the Core Utils are also available under alternate shells (C shell, Korn shell etc). More bash commands: Linux Command Directory from O'Reilly, GNU CoreUtils.SS64 bash discussion forumLinks to other Sites, books etc World Economic Forum Survey Projects Blockchain 'Tipping Point' by 2023 The World Economic Forum (WEF) has identified blockchain technology as one of its six mega-trends in a new report broadly aimed at outlining the expected transition to a more digital and connected world. Compiled by the WEF's Global Agenda Council on the Future of Software and Society, the report included the results of a survey of more than 800 information and communications executives and experts. Perhaps most notable among the poll's findings is that those surveyed believe the "tipping point" for government use of the blockchain will occur by 2023.

skype Translation(s): English - Français - 简体中文 - Русский Skype is non-free, proprietary, closed source software, owned by a corporation and not supported by Debian. Have you considered using a free and open source alternative, which is community-owned and supported by Debian, such as VoIP ekiga, linphone, or jitsi? See also UnifiedCommunications As of July, 2016 Microsoft has released a new Skype version for Linux which is currently in alpha state.

Painfully Computer Pranks ~ Computer Hacking Computer pranks to freak out your friends and make them crying for mummy I've been posting many articles about computer pranks on this blog (Deadly Virus Prank, The Ultimate Virus, How to Create a Fake and Harmless Virus and Facebook Virus Prank). Today , I will show you 5 great computer pranks that will frustrate your victims very much. These pranks could be very painfully, so please use them at your own risk ;) 1. Crash a Computer System With Nothing But a URL! Entry Level Credential: Linux Essentials Linux adoption continues to rise world-wide as individual users, government entities and industries ranging from automotive to space exploration embrace open source technologies. This expansion of open source in enterprise is redefining traditional Information and Communication Technology (ICT) job roles to require more Linux skills. Whether you’re starting your career in Open Source, or looking for advancement, independently verifying your skill set can help you stand out to hiring managers or your management team. The Linux Essentials Professional Development Certificate (PDC) is a great way to show employers that you have the foundational skills required for your next job or promotion.

Save WiFi/Individual Comments - LibrePlanet Right now, the FCC is considering a proposal to require manufacturers to lock down computing devices (routers, PCs, phones) to prevent modification if they have a "modular wireless radio"[1][2] or a device with an "electronic label"[3]. The rules would likely: Restrict installation of alternative operating systems on your PC, like GNU/Linux, OpenBSD, FreeBSD, etc. Prevent research into advanced wireless technologies, like mesh networking and bufferbloat fixes Ban installation of custom firmware on your Android phone Discourage the development of alternative free and open source WiFi firmware, like OpenWrt Infringe upon the ability of amateur radio operators to create high powered mesh networks to assist emergency personnel in a disaster.

Iptables 1 Set Up a Simple Firewall Iptables 1 Set Up a Simple Firewall For a Single Computer - Not a Network Terminator Ends the Terminal Window Blahs By Jack M. GermainLinuxInsider 12/05/13 5:00 AM PT Terminator has its own, innovative approach to providing a user interface. If no other feature appeals to you, the multi-pane display should be priceless. grep () NOTE: click here if you get an empty page. grep, egrep, fgrep - print lines matching a pattern grep [options] PATTERN [FILE...] grep [options] [-e PATTERN | -f FILE] [FILE...] Grep searches the named input FILEs (or standard input if no files are named, or the file name - is given) for lines containing a match to the given PATTERN. By default, grep prints the matching lines. In addition, two variant programs egrep and fgrep are available.

What are useful command-line network monitors on Linux Network monitoring is a critical IT function for businesses of all sizes. The goal of network monitoring can vary. For example, the monitoring activity can be part of long-term network provisioning, security protection, performance troubleshooting, network usage accounting, and so on. Depending on its goal, network monitoring is done in many different ways, such as performing packet-level sniffing, collecting flow-level statistics, actively injecting probes into the network, parsing server logs, etc. 10 must-have Linux desktop enhancements Among the variety of enhancements for the Linux desktop, there are a few gems that will really blow you away. Jack Wallen pinpoints some additions you'll definitely want to try. If you haven't experienced the Linux desktop as offered by one of the more recent distributions, you don't know what you're missing. Not only is the default desktop a thing to behold, it also allows for the addition of some amazing enhancements. From eye candy to tools that make your work more efficient, the Linux desktop can be expanded to include just about anything you want. I'm going to share some desktop enhancements that will make your Linux desktop experience far better.