Armbian. Chromium OS for SBC. PicUntu. RISC OS Open. Supporting RISC OS Open RISC OS is getting ever more popular and there are more people trying it out every day. 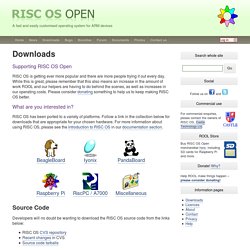 While this is great, please remember that this also means an increase in the amount of work ROOL and our helpers are having to do behind the scenes, as well as increases in our operating costs. Please consider donating something to help us to keep making RISC OS better. What are you interested in? RISC OS has been ported to a variety of platforms. Developers will no doubt be wanting to download the RISC OS source code from the links below: Angstrom. Ubuntu ac100. Ubuntu on AC100 is currently an official demonstration of the Ubuntu ARM port and works fairly well. 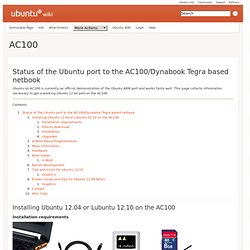 This page collects information necessary to get a working Ubuntu 12.04 port on the AC100. Installing Ubuntu 12.04 or Lubuntu 12.10 on the AC100 Installation requirements. Arch Linux. Fedora. Linaro. Tiny Core. OpenSUSE. Most all of the usual openSUSE distribution (>6000 packages) builds and runs on all the ARM hardware we have tested it on so far. 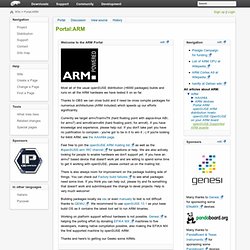 Thanks to OBS we can cross build and if need be cross compile packages for numerous architectures (ARM included) which speeds up our efforts significantly. Currently we target armv7l/armv7hl (hard floating point with aapcs-linux ABI, for armv7) and armv6l/armv6hl (hard floating point, for armv6). If you have knowledge and experience, please help out. If you don't take part you have no justification to complain - you've got to be in it to win it ;-) If you're looking for 64bit ARM, see the AArch64 page. Feel free to join the openSUSE ARM mailing list as well as the #openSUSE-arm IRC channel for questions or help. There is also always room for improvement on the package building side of things. Building packages locally via osc or even manually to test is not difficult thanks to QEMU. Working on platform support without hardware is not possible. FreeBSD. Planning for getting ARM to Tier 1 EABI status Boards that are supported or currently in the works: ArndaleBoard (Samsung Exynos5250) Atmel AT91RM9200 BeagleBoard and BeagleBoard-xM (TI OMAP3) - GSoC 2012, stable - aleek@ BeagleBone Cubieboard(1,2) (Allwinner A10/A20) Device Solutions Quartz Gateworks Avila GW2348 Gateworks Cambria GW2358 Genesi Efika MX Smarttop Genesi Efika MX Smartbook Globalscale Technologies OpenRD platform Kwikbyte KB9202B (as well as the older KB9202 and KB9202A) Marvell DB-88F5182, DB-88F5281, DB-88F6281, RD-88F6281, DB-78100 Marvell DB-88F6781 (ARMv6) Marvell DB-78460 (ARMv7) Marvell Sheeva Plug Marvell Dream Plug Pandaboard (OMAP4) Phytec Cosmic Board (Freescale Vybrid Family) Raspberry Pi Radxa Rock (Work in progress) SBC6045 with Atmel at91sam9g45 - under heavy development - aleek@ Technologic Systems TS-7200 Technologic Systems TS-7800 Wandboard Zedboard (Xilinx Zynq) Colibri VF50 Evaluation Board (r261411) CPUs that are supported or currently in the works: 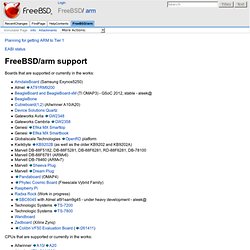 NetBSD. About NetBSD/evbarm NetBSD/evbarm is the port of NetBSD to various evaluation and prototyping boards based on CPUs implementing the ARM architecture. 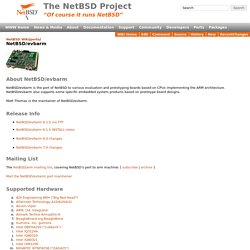 Support for the BRH was written by Jason Thorpe, and contributed by Wasabi Systems, Inc. Tizen. Introduction The purpose of this Community page is to list all ongoing efforts to get Tizen on the ARM platform using Linux kernel Related pages : 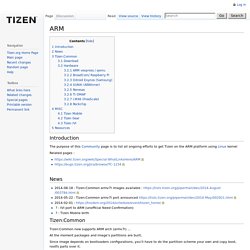 MINIX. This page describes how to build and run Minix/ARM. 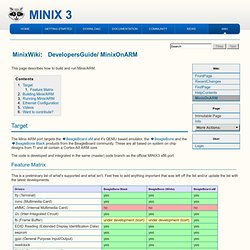 The Minix ARM port targets the BeagleBoard-xM and it's QEMU based emulator, the BeagleBone and the BeagleBone Black products from the BeagleBoard community. These are all based on system on chip designs from TI and all contain a Cortex-A8 ARM core. The code is developed and integrated in the same (master) code branch as the official MINIX3 x86 port. This is a preliminary list of what's supported and what isn't. Feel free to add anything important that was left off the list and/or update the list with the latest developments. First do a checkout of the code $ mkdir -p $HOME/minix $ cd $HOME/minix $ git clone src $ cd src Secondly configure your build by creating a .settings file. Freescale Yocto. Yoctoproject is a framework for creating Linux distributions for embedded devices. 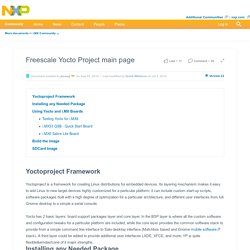 Its layering mechanism makes it easy to add Linux to new target devices highly customized for a particular platform; it can include custom start-up scripts, software packages built with a high degree of optimization for a particular architecture, and different user interfaces from full Gnome desktop to a simple a serial console. Yocto has 2 basic layers: board support packages layer and core layer.

In the BSP layer is where all the custom software and configuration tweaks for a particular platform are included, while the core layer provides the common software stack to provide from a simple command line interface to Sato desktop interface (Matchbox based and Gnome mobile software stack). A third layer could be added to provide additional user interfaces LXDE, XFCE, and more; YP is quite flexible&emdash;one of it major strengths.

A20 Yocto. Some time ago I ordered a A20-OLinuXino-LIME-4GB board. 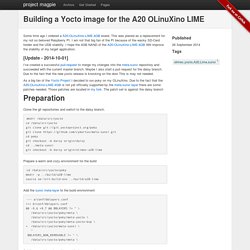 This was planed as a replacement for my not so beloved Raspberry PI. I am not that big fan of the PI because of the wacky SD-Card holder and the USB stability. I hope the 4GB NAND of the A20-OLinuXino-LIME-4GB Will improve the stability of my target application. [Update - 2014-10-01] I’ve created a successful pull-request to merge my changes into the meta-sunxi repository and succeeded with the current master branch. As a big fan of the Yocto Project I decided to run poky on my OLinuXino. Clone the git repositories and switch to the daisy branch.