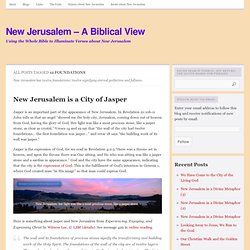 Jasper is an important part of the appearance of New Jerusalem. In Revelation 21:10b-11 John tells us that an angel “showed me the holy city, Jerusalem, coming down out of heaven from God, having the glory of God. Her light was like a most precious stone, like a jasper stone, as clear as crystal.” Verses 14 and 19 say that “the wall of the city had twelve foundations… the first foundation was jasper…” and verse 18 says “the building work of its wall was jasper.” Jasper is the expression of God, for we read in Revelation 4:2-3 “there was a throne set in heaven, and upon the throne there was One sitting; and He who was sitting was like a jasper stone and a sardius in appearance.”

Here is something about jasper and New Jerusalem from Experiencing, Enjoying, and Expressing Christ by Witness Lee, © LSM (details). Let us rejoice in this wonderful expression of God in New Jerusalem! Photo courtesy of U.S. Scientific Evidence in the Bible - The 12 Stones - David Pawson. Www.preciousstonesofthebible.com/stonegallery.html. The New Jerusalem - A pattern for Living (pt.4 foundation gems and tribe names above the gates) Next tribe is Simeon-Levi and his name means hearing. and obviously has to do with what we hear. 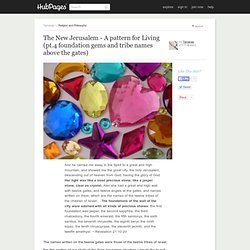 Jacob's prophecy to him was "Simeon and Levi are brethren" Levi means attached or associated with. Levi also represented the priesthood. (Judah)We praise Him with what we say, (Issachar)we offer ourselves to Him in service by what we do, (Zebulun)Our thoughts abide in Him, (Reuben) we behold Him and now we listen to Him. (Simeon) We must learn to hear His voice. "He who has an ear to hear" is mentioned 14 times in the new testament. “Therefore whoever hears these sayings of Mine, and does them, I will liken him to a wise man who built his house on the rock: ~ Matthew 7:24 Hearing is associated with doing. Why do you spend money for what is not bread, And your wages for what does not satisfy?

Three times in these verses we are told that listening to Him is vital to our spiritual life. Keep our ears tuned to His station is an absolute must to spiritual health. Foundation Stones. There are many biblical references to gemstones but the most important are considered to be Aaron's breastplate (Exodus 28: 15-20 and 39:10-13), the stones in the foundations of the wall of New Jerusalem (Revelation 21:18-21), and the precious stones that were among the King of Tyre's treasures (Ezekiel 28:13). 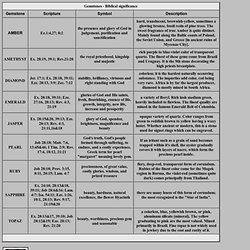 Aaron was Moses' brother and led the tribe of the high priests. His breastplate is one of the earliest accounts of an array of gemstones as decoration and symbols. It is described in the Bible as the breastplate of judgment or decision. It had twelve precious gems, one for each of the Israelite tribes, and was inscribed with their names. The stones were set in four rows: a sardius, topaz, and carbuncle in the first row; an emerald, sapphire and diamond in the second; a ligure, agate, and amethyst in the third; and a beryl, onyx, and jasper in the fourth row.

Agate was the second stone in the third row of the breastplate and thought to represent the Aser tribe of the Israelites. 12 Foundations of New Jerusalem.