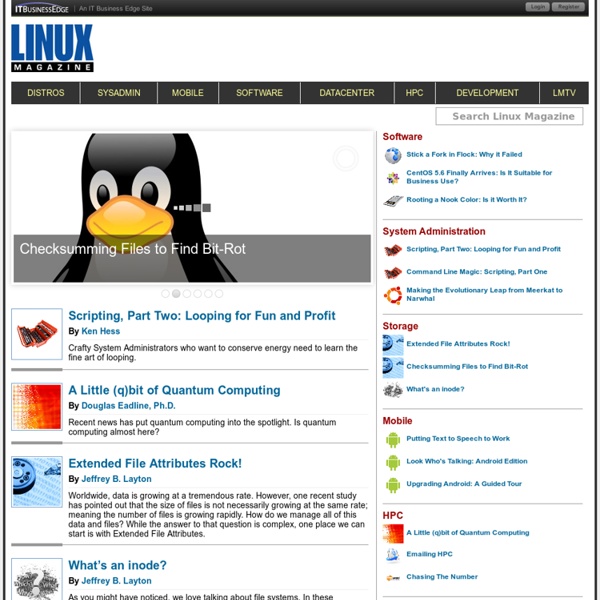 How Linux works The main problem you face when you're attempting to lift the lid on what makes Linux tick is knowing where to start. It's a complicated stack of software that's been developed by thousands of people. Following the boot sequence would be a reasonable approach, explaining what Grub actually does, before jumping into the initiation of a RAM disk and the loading of the kernel.

7 Tasks You Shouldn’t Use a GUI For Sometimes the GUI is just too slow. Learn how to resize images, add drop shadows, splice mp3s, clone hard drives and more with the command line. Here are a few tasks that you might want to consider using the command line for. 1. Resizing images How to Automatically Download Virtually Anything as Soon as It's Available we need a writeup on how to use showrss with bittorent or others. ShowRSS has feeds for lots of current TV shows. Registering on the site (for free) will enable you to create a single feed of all your favourite shows. qBittorrent is a cross platform (Windows, Mac, Linux) torrent client with a built-in RSS downloader.

Linux Applications and Tools for Smart Messaging System - SMS SMS-Clients SMs Under Web - SMuW SMuW is a command line tool (there's also a lite and intuitive graphical interface) to automatically send SMS from web sites. It is highly configurable, supports a lot of features. By default the package can send SMS to the main italian sites (190.it, rossoalice, tim.it ...) and users can easly create their own route to send SMS with other sites. Blog Archive » 7 Cool Things to Do With Linux So you’ve taken the plunge and installed Linux. You’ve followed all the HOWTOs all over the net. You’ve got your wireless card working flawlessly. You’ve got your video card working (and you’ve begun to loathe that spinning cube).

58 Cool Hacks - LXF Wiki From LXF Wiki (Originally written for Linux Format issue 58, October 2004) Increase your guru points and apply these cunning hacks to boost performance, secure your system and increase productivity - or fun! Ch03 : Linux Networking Now that you have a firm grasp of many of the most commonly used networking concepts, it is time to apply them to the configuration of your server. Some of these activities are automatically covered during a Linux installation, but you will often find yourself having to know how to modify these initial settings whenever you need to move your server to another network, add a new network interface card or use an alternative means of connecting to the Internet. In Chapter 2, "Introduction to Networking", we started with an explanation of TCP/IP, so we'll start this Linux networking chapter with a discussion on how to configure the IP address of your server. You need to know all the steps needed to configure IP addresses on a NIC card. Web site shopping cart applications frequently need an additional IP address dedicated to them.

Basics of Linux system administration: Setting up your system and software 1. Before you begin You need a working Linux system that includes the bash shell, so you can practice the commands and techniques covered in this knowledge path. Our command examples are taken from Ubuntu and Fedora, but they apply to most other Linux distributions as well. 2.