Sed - An Introduction and Tutorial 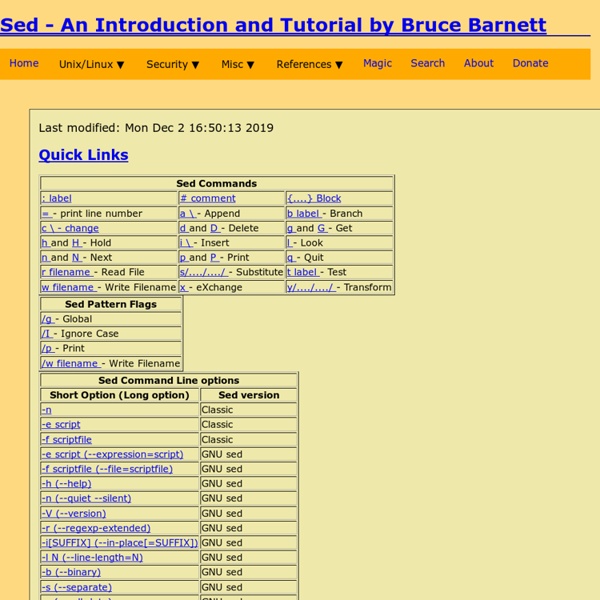 Last modified: Mon Dec 2 16:50:13 2019 Table of Contents Note - You can click on the table of contents sections to jump to that section. Then click on the section header of any section to jump back to the table of contents. Copyright 1994, 1995 Bruce Barnett and General Electric Company Copyright 2001,2005,2007,2011,2013 Bruce Barnett All rights reserved You are allowed to print copies of this tutorial for your personal use, and link to this page, but you are not allowed to make electronic copies, or redistribute this tutorial in any form without permission. Original version written in 1994 and published in the Sun Observer Introduction to Sed How to use sed, a special editor for modifying files automatically. There are a few programs that are the real workhorse in the UNIX toolbox. One way to think of this is that the old, "classic" version was the basis of GNU, FreeBSD and Solaris verisons of sed. The Awful Truth about sed Sed is the ultimate stream editor. Anyhow, sed is a marvelous utility. .

Awk - A Tutorial and Introduction - by Bruce Barnett Your browser does not have Javascript enabled. I use Javascript for analytics, and to show ads which pay for the maintenance Last modified: Thu Apr 23 16:37:47 EDT 2015 Part of the Unix tutorials And then there's My blog Table of Contents Copyright 1994,1995 Bruce Barnett and General Electric Company Copyright 2001, 2004, 2013, 2014 Bruce Barnett All rights reserved You are allowed to print copies of this tutorial for your personal use, and link to this page, but you are not allowed to make electronic copies, or redistribute this tutorial in any form without permission. Original version written in 1994 and published in the Sun Observer Awk is an extremely versatile programming language for working on files. The examples given below have the extensions of the executing script as part of the filename. Why learn AWK? In the past I have covered grep and sed. AWK - the (very old) original from AT&T NAWK - A newer, improved version from AT&T GAWK - The Free Software foundation's version Basic Structure

13. Classes and objects — How to Think Like a Computer Scientist: Learning with Python 2nd Edition documentation 13.1. Object-oriented programming Python is an object-oriented programming language, which means that it provides features that support object-oriented programming ( OOP). Object-oriented programming has its roots in the 1960s, but it wasn’t until the mid 1980s that it became the main programming paradigm used in the creation of new software. It was developed as a way to handle the rapidly increasing size and complexity of software systems, and to make it easier to modify these large and complex systems over time. Up to now we have been writing programs using a procedural programming paradigm. 13.2. A class in essence defines a new data type. Consider the concept of a mathematical point. A natural way to represent a point in Python is with two numeric values. An alternative is to define a new user-defined compound type, also called a class. A class definition looks like this: This definition creates a new class called Point. class Point: "Point class for storing mathematical points." 13.3.

To SQL or NoSQL? That’s the database question Poke around the infrastructure of any startup website or mobile app these days, and you're bound to find something other than a relational database doing much of the heavy lifting. Take, for example, the Boston-based startup Wanderu. This bus- and train-focused travel deal site launched about three years ago. But why is that? Today, the database landscape continues to become increasingly complicated. The genesis of NoSQL In the beginning—about 12 years ago—there was structured data, and it was good. But that data was live, stored in operational systems like Enterprise Resource Planning (ERP) setups. SQL-based relational servers are built to handle the demands of financial transactions, designed around the tenets of ACID: Atomicity, Consistency, Isolation, and Durability. ACID, though, doesn't matter much when you're just reading data for analysis. How do you scale an Internet business to handle that? That setup is a little sloppy, and it wouldn't work for financial transactions. Hadoop

How to Design Programs: An Introduction to Computing and Programming In the beginning, people thought of computers as number crunchers. And indeed, computers are very good at working with numbers. Since teachers start their first-graders on computing with numbers, we start with numbers, too. Once we know how computers deal with numbers, we can develop simple programs in no time; we just translate common sense into our programming notation. Still, even developing such simple programs requires discipline, and so we introduce the outline of the most fundamental design recipe and the basic programming guideline at the end of this section. 2.1 Numbers and Arithmetic Numbers come in many different flavors: positive and negative integers, fractions (also known as rationals), and reals are the most widely known classes of numbers: The first is an integer, the second one a negative integer, the next two are fractions, and the last one is an inexact representation of a real number. As in arithmetic or algebra, we can nest expressions: (sqrt 2) = #i1.4142135623731 but

Java vs. JavaScript So... what is the difference between Java and JavaScript anyway? They are both similar and quite different depending on how you look at them. First their lineage: Java is an Object Oriented Programming (OOP) language created by James Gosling of Sun Microsystems. You may be wondering what OOP means by now. Continuing with the model car example, when you built the engine, you didn't use any of the parts that would later build the seats (a 350 four-barrel engine with a seat belt sticking out if the piston would look pretty silly). The point is that in these languages, you build objects out of classes of commands to create the whole. Java and JavaScript are Still Two Different Animals Now let's talk about how Java and JavaScript differ. Another major difference is how the language is presented to the end user (that's you when you're surfing). JavaScript is text-based. The Benefits of JavaScript In my opinion, JavaScript's main benefit is that it can be understood by the common human. Enjoy!